Save the date: Have ‘Lunch at the Piccadilly’ with PPT 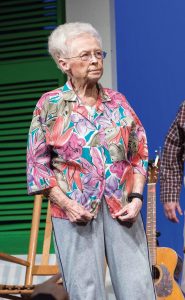 Athlene Carter and the residents of Rosehaven Retirement Home are not happy that their home will be sold to Ballard College.
JON C. LAKEY / SALISBURY POST

The characters of Clyde Edgerton and the music of Mike Craver are returning to the stage of the Meroney Theater Jan. 31 through Feb. 9 in the new musical “Lunch at The Piccadilly,” based on the novel by Clyde Edgerton.

Clyde Edgerton is the author of ten novels, a book of advice (“Papadaddy’s Book For New Fathers”), a memoir, short stories, and essays. He has been a Guggenheim Fellow and five of his novels have been New York Times Notable Books. Currently, he is the Thomas S. Kenan III Distingueshed Professor of Creative Writing at UNC Wilmington. An avid musician as well as a writer, he has performed with Mike Craver on the recording of “The Bible Salesman.”

Mike Craver’s music has been heard in all three of the “Smoke On The Mountain” musicals performed by Piedmont Players between the years 1994-2006. He also wrote and appeared in the musical “Oil City Symphony” in 2001. He was also one of the original members of The Red Clay Ramblers from Chapel Hill.

“Lunch At The Piccadilly,” based on the novel by Clyde Edgerton, was developed by The Playworks Group, Steve Umberger, director, at Festival Stage, Parkway Playhouse, and in the development series at York Theater Company, New York, after its initial production at Cape Fear Regional Theater in Fayetteville, N.C.

The story centers around Carl (Dennis Welch) having to take his aunt Lil (Becky Lippard) to Rosehaven Nursing Home. She is finally too old to live by herself. Once at the home, she meets the Porchers ( Eli, Barry Dyson; Clara, Corrine Mauldin; and L. Ray Flowers, John Brincefield). They spend most of their time sitting on the porch and rocking until Lil arrives and stirs things up. She is very upset that Anna (Robin Rogers) is selling the retirement home to a nearby college run by Dr. Sears (Whit Whitley). Oh, and someone has to get her car keys away from her before she runs another red light on the way home from the Piccadilly Cafeteria.

he Meroney Theater is located at 213 S. Main St. in downtown Salisbury.