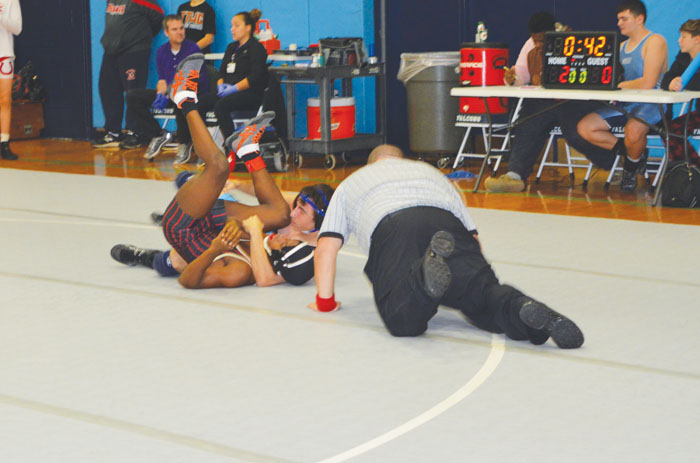 CHINA GROVE — It appears the West Rowan wrestling team is finished window shopping and ready to make a purchase.

A year after being edged for the NPC regular-season and tournament titles, the Falcons secured their first conference championship since 1990 with a briskly completed, 60-21 victory at Carson on Wednesday.

“This is really nice,” coach John Brown said after West (16-3, 5-0) recorded five pins and won four matches by forfeit. “Especially after last year. It was North Iredell that beat us — by two points in the conference and by half-a-point in the tournament. We were right there, but didn’t get it. This year we took it back.”

West, the good-time-Charlies of the NPC, seems to have dubbed this season “Unfinished Business.” It all-but-clinched the title last Friday with a 43-24 nod against North Iredell — then wrapped its arms around the championship and squeezed hard last night.

“We had already faced our best competition,” junior Michael Molenda said. “Once we beat North Iredell, we felt we had it in the bag. Tonight, we just did what we had to do.”

They did it convincingly against last-place Carson (0-5). The Cougars had already forfeited at 106 and 113 pounds when seniors Josh Vega and Drew Magnuson posted back-to-back pins, momentarily knotting the score 12-12.

“We’re almost there,” first-year Carson coach Brandon McCarty offered. “We just forfeit too many points. When you don’t have a full lineup, when you’re giving up 30 points every match, you pretty much have to pin out.”

Brown warned not to be too swayed by the scoreboard’s testimony. “Carson has been in just about every match,” he said. “They just haven’t gotten it. They’ve got five or six guys who will come after you. This wasn’t as easy as you might think.”

West forged ahead comfortably by winning the next four bouts, starting with Molenda’s 58-second pin against bumped-up Noah Basinger at 132 and ending with senior Gavin Coffield’s 16-second fall against Joseph McGrady at 152. Basinger had been undefeated in the NPC at 132 and 138.

Barringer combined a first-period takedown with three back points to build an 8-2 lead, then held off West’s all-county junior. “I went out there nervous as usual,” he said. “But by halfway through the first period that went away and I felt warmed up.”

Brown called it “a big surprise at 195,” and added: “That wasn’t supposed to happen. Baiden has the best record on our team, something like 26-5. He’s supposed to win that match every time. He just didn’t wrestle well and Barringer wrestled great. He was ready.”

McCarty agreed. “That wasn’t a surprise to me,” he said. “If he just lets go and wrestles, he’s one of the best around here.”

By night’s end, though, West had made up for lost time — and last year’s missed opportunity.

“It’s great because we’re not some tough team,” said Coffield. “We’re really laid back. If you saw us compared to some other schools, you’d be like, ‘Who are they?’ We’re not rough-and-tumble guys. We’re a team of misfits, a mixed bag, and somehow we all get along.”

And a team that can’t be counted out.

“West Rowan is not a great team,” said McCarty, a former assistant in Mount Ulla. “But they’re a good team. They don’t have a soft spot in their lineup — and they have kids who don’t quit.”

NOTES: Carson also got six points from Josh McCurry, who pinned Seth Simmerson in the 160 match. … West’s Devon Pena (106), Owen Matlock (113), Drake Martin (220) and Jaquan Turner (Hwt) each won by forfeit. … Both teams will compete in Saturday’s NPC tournament at A.L. Brown High School. … The 3A state team tournament begins Tuesday at a site to be determined.