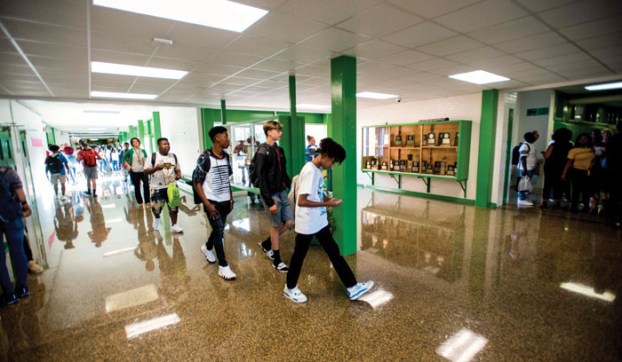 SALISBURY — At a nearly 10-hour Rowan-Salisbury Board of Education retreat Wednesday, less than seven minutes was dedicated to answering one question: Is a standalone career and technical education school something the district wants to pursue?

The board answered unanimously: Yes. But where would it go?

Koontz Elementary School and North Rowan High School were each considered as possibilities for the site of the future school. But if closed, North Rowan would not remain an option.

So by a second unanimous vote, the board moved to end discussion of closing North Rowan High School until countywide redistricting plans have been implemented. Its possible closure will be re-evaluated once the new districts are in place and have been in effect long enough for an informed decision, said school board member Kevin Jones.

The board reached its decision after a presentation of proposed redistricting plans, which showed that North falling short of capacity could be mitigated by adjusting high school attendance zones.

Currently, North Rowan High has a capacity of 1,100. Enrollment is 541 this year, meaning less than 50 percent utilization.

A redistricting plan prepared by Mike Miller of Numerix showed a potential enrollment of 863, or 78 percent capacity. The shift would come if zones were drawn according to proximity, with a maximum capacity of 85 percent across all high schools.

Superintendent Lynn Moody said North Rowan had been considered as a potential home for the vocationally focused hub only because residents had expressed displeasure that the proposed consolidation plan stripped them of a school without offering anything in return.

“The community asked us to leave something there,” Moody said.

These scenarios would take some time to compile, Miller said, estimating that he could have them by the board’s Feb. 28 business meeting.

“Reassignment for the high school, no one is assuming that that will take place next year,” said Moody. “It doesn’t matter if it will take 60 or 90 days, because we’re not going to be able to pull it off this year.”

But she did express intentions to have a decision in place by the close of the 2018-19 school year, giving parents and staff the 2019-20 year to plan for transportation, faculty reassignment and more.

Board member Dean Hunter said the Koontz Elementary site “made the most geographical sense” for a centralized vocational school.

“Even if we keep North open, in the very near future there’s going to have to be a new building built,” he said.

He said a recent condition assessment listed at a Level 4. Schools ranking at Level 3 or 4 shouldn’t be inhabited, according to state standards, he said.

Rather than deciding on Koontz as the location, board members tasked district staff with evaluating all potential sites for the career and technical education center.

Board member Jean Kennedy said proximity should not be the only consideration when identifying the best site for the school. Other buildings that are under consideration for closure could cost the school system less in the long run, she said.

Board member Travis Allen said he also wants additional time spent on evaluation before the school is built.

“We don’t want to build (a career and technical education center) just to build one,” Allen said. “When we do it, we want to do it right.”

SALISBURY — The Salisbury Planning Board on Tuesday approved a special use permit to allow for a craft beer bottle... read more