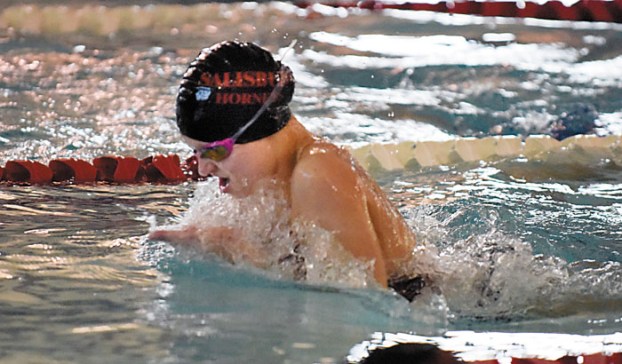 Both impacted East Carolina University swimming on Saturday as freshmen.

The departure of those superstars opens the door for others to shine. Both were four-time county swimmers of the year. That title will pass to someone new now. Exactly whom that will be will be largely determined by today’s Rowan County Championships at the Hurley YMCA.

As far as the team titles, the big question is can Salisbury’s defending champs do it again without all those sure-thing points that Morrison and Knorr always provided.

The Hornets appear to have a good chance to four-peat. This team is led by Katie Knorr, Emily Knorr, Calista Erhart, Anna Grace Woolly and Phoebe Hollingsworth.

The Hornets were stout in Saturday’s Central Carolina Conference Championships held at Winston-Salem State, placing a firm second behind a North Davidson squad with superior numbers.

Based on times in the CCC Championships and North Piedmont Conference Championships, Salisbury is likely to win the 200 medley relay and 400 free relay today. The relays provide huge points.

The Knorr girls, Ethan’s younger sisters, are likely to win any event they’re in. Emily is the favorite in the 200 free and 500 free, while Katie is the likely pace-setter in the 200 IM and 100 backstroke.

The main challenger for Salisbury is certain to be Carson, which is coming off a runner-up finish to South Iredell in the NPC Championships.

Carson’s Olivia Shorter is the favorite in the 100 butterfly and will place high in every event in which she’s entered. Shorter and Sever provide half of Carson’s favored 200 free relay team.

East Rowan placed third in the NPC Championships and is likely headed to another third-place finish today. Brenna Culp leads the Mustangs.

South Rowan’s boys ruled county swimming for more than a decade before Salisbury, coached by Ryan Starrett, finally knocked off the Raiders in 2017 and repeated last season.

It could be quite a battle that the Hornets and Raiders stage today. In the CCC Championships, South totaled 270 points for second place behind North Davidson, while Salisbury logged 264 for third place.

Salisbury’s Roarke Burton is the favorite in the 50 free and 100 free, while teammate Roshen Amin appears to be the front-runner in the 200 IM and 100 butterfly.

Salisbury could also take the 400 free relay, but the relays are where South is strongest. The Raiders will be favored in the 200 medley relay and the 200 free relay.

Blaise Bumgarner has been setting school records at South and is the favorite in the 100 backstroke.

Cameron Hurd, Christian Reynolds and Noah Severt are other standouts for South.

Based on last week’s conference times, Hurd’s race in the 100 breaststroke with Carson’s Matthew Epley could be the best of the day.

Epley is the standout for a Carson team that could make some noise. The Cougars placed second in the NPC Championships to South Iredell and have some depth.

West Rowan’s Matthew Gouge looks like the guy to beat in the 500 free.