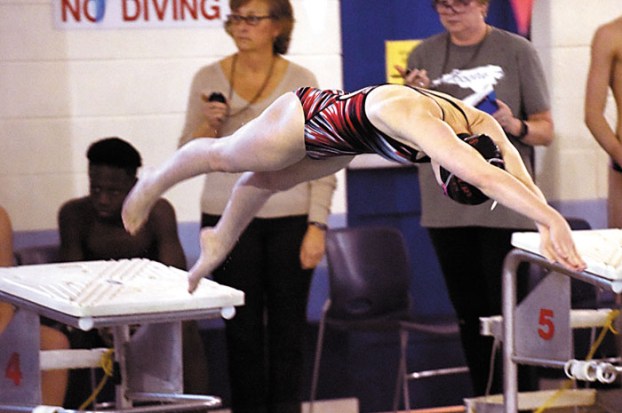 Wayne Hinshaw/for the Salisbury Post ... Salisbury’s Emily Knorr, at the start of the 200-yard freestyle race, during Wednesday’s Rowan County Swim Championships at Hurley YMCA. Knorr helped lead the Hornets to their fourth straight county title and was named the most outstanding swimmer in the event. 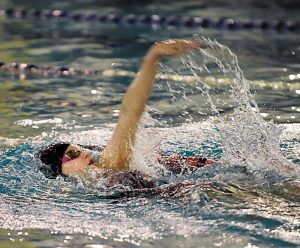 Salisbury’s Katie Knorr in the 200 yard IM. … Photo by Wayne Hinshaw, for the Salisbury Post

SALISBURY —  Salisbury’s swimming Knorr twins are close to identical, but they aren’t clones.

Emily is the Knorr focused on distance. She can swim all day — and all night.

Katie is the versatile Knorr. She can handle any stroke. It’s safe to say that Salisbury coach Sallie Pittman could enter her in almost any event with positive results.

Salisbury got an awful lot from both Knorrs on Wednesday. Neither of the sophomores has lost all season.

“Calista isn’t quite Kat Morrison (Salisbury’s standout last season), but she’s been a great addition for us,” Pittman said. “It’s nice to get a surprise exchange student like that. Her sister (Marcia Mariel-Erhart) swims for Catawba, so that’s the connection. She’ll be going back to Germany next school year, but we sure wish we could keep her.”

“Distance swimming comes easily to me,” Emily said. “I can pace. I  love it.”

Emily Knorr was named the meet’s outstanding swimmer, with the meet records separating her from her twin and from Erhart, who scored an equal number of points.

Katie Knorr won the 200 IM by 21 seconds over Carson runner-up Taylor Seaver and cruised in the 100 backstroke by 11 seconds, with East’s Brenna Culp second.

“Freestyle is boring for me,” Katie said. “I like trying all the different strokes. The 200 IM is my favorite event.”

Salisbury had both Knorrs and Erhart teaming up in two relays, so the 200 medley relay and 400 free relays were over before they started. They were runaway wins for the Hornets.

Phoebe Hollingsworth joined in for a county-meet record 3:56.13 in the 400 free relay. Anna Grace Woolly joined the fun on a 200 medley relay team that breezed to a 22-second victory over runner-up East.

Carson won the three events that the Hornets didn’t.

Carson’s Sever, Hughley, Olivia Weatherby and Olivia Shorter took the 200 free relay, edging a Salisbury unit that was made up of Sage Huffman, Meredith Burton, Leah Cressler and Hollingsworth.

Sever defended her title in the 100 free, pulling out a tight race with Hollingsworth.

Shorter was the victor in the most exciting race of the evening, nipping Woolly in the 100 breaststroke. Shorter was clocked in 1:21.92, while Woolly swam 1:22.19.

While Salisbury’s fourth consecutive county championship was built on a foundation of Erhart and the phenomenal Knorrs, who swim six days a week, that trio couldn’t have outscored Carson alone.

“We’re very fortunate to have some year-round swimmers, but we’ve also got girls like Anna Grace Woolly who aren’t,” Pittman said. “She runs cross country and she plays soccer, but she was big for us today, swimming on a relay winner and almost winning the 100 breaststroke. We stuck (tennis standout) Meredith Burton in events that might not be her best ones, but she gave us a lot of points. It’s a good team. We got a lot today from a lot of different girls.”

This was the 20th time the Rowan County Championships have been held. Salisbury won for the eighth time. East and South have won six each.

“It really meant a lot to win this,” Emily Knorr said. “We’re not as big as some teams.”

Regional competition will be coming up on Feb. 1-2.