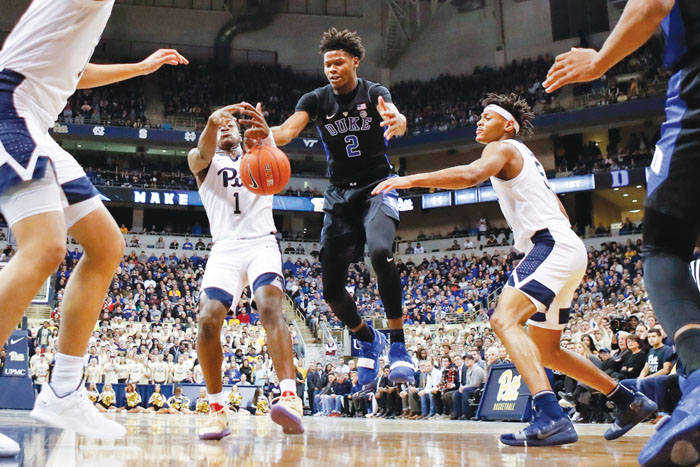 PITTSBURGH (AP) — Zion Williamson hit his first 10 shots on his way to 25 points, fellow freshman RJ Barrett scored 26 and No. 2 Duke had little trouble with Pittsburgh in a 79-64 victory on Tuesday night.

Williamson finished 11 of 13 from the floor to go with seven rebounds and seven assists for the Blue Devils (16-2, 5-1 Atlantic Coast Conference), who kept the Panthers (12-7, 2-4) in check even without injured freshman guard Tre Jones. Duke held Pitt to 41 percent shooting, outrebounded the Panthers 39-34 and wasn’t in any real danger after a surge midway through the first half.

Pitt head coach Jeff Capel expected it to feel “weird” while facing Duke head coach Mike Krzyzewski. Capel spent seven years as Krzyzewski’s top assistant before leaving to join the Panthers last spring, developing a reputation as one of the top recruiters in the country.

Capel hopes to one day bring in the kind of talent to Pitt that now regularly flocks to the Krzyzewski and the Blue Devils. He might, but not quite yet. The talent gulf between the two programs came into vivid detail once the early adrenaline —  fueled in part by a sold-out crowd at raucous Petersen Events Center that included rap superstar Jay-Z — wore off and the Williamson went to work.

The Panthers actually led 16-15 early but Duke responded with a 12-0 run that showcased Williamson’s remarkable gifts. He hit a lay-up in traffic, drilled a 3-pointer and tipped in a Barrett miss to put the Blue Devils firmly in control and put the rest any concern about an emotional letdown following a taut victory over the Cavaliers.

Even while playing without Young, whom Capel considers one of the best defensive players in the ACC and who remains out while recovering from a shoulder injury, the Blue Devils steadily pulled away against the energetic if physically overmatched Panthers.

Pitt managed just nine points over the final 13 minutes of the opening half and unlike its upset wins over Florida State and Louisville earlier this month, the Panthers were unable to get to lane and get to the free-throw line. Duke’s massive frontcourt didn’t allow it. The taller, longer Blue Devils swallowed up whatever open space existed in the lane.

The Blue Devils led 44-25 at the break and Williamson hit all nine of his shots. He eventually missed one on his second attempt of the second half but it didn’t stop Duke’s lead from growing to as much as 23. When a mini-run by Pitt got the Panthers within 61-45 with 8:57 to play. Krzyzewski called timeout. Barrett drilled 3-pointer on Duke’s next possession and it was over.

Duke: The Blue Devils can guard when they want to even without Jones. The team that leads the nation in blocked shots swatted seven — right around Duke’s season average — and found an extra gear when it was required.

Pitt: Capel believes the Panthers are on a path that will return them to prominence. A talent upgrade is a must. For all the fight Pitt showed, the Panthers aren’t big enough or deep enough to hang with the ACC’s top tier quite yet.

Pitt: Visits Louisville on Saturday. The Panthers beat the Cardinals 86-83 in overtime at home on Jan. 9.