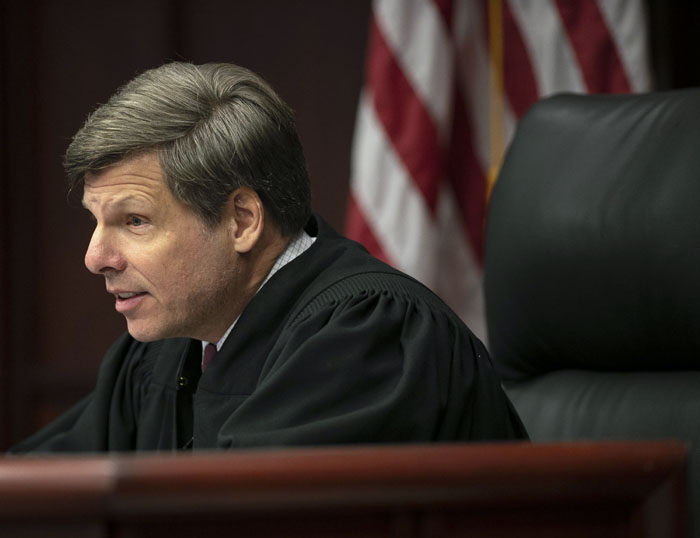 RALEIGH — A judge ruled Tuesday that there are no grounds for him to step in and declare victory for the Republican in the country’s last undecided congressional race amid an investigation into whether his lead was boosted by illegal vote-collection tactics.

Superior Court Judge Paul Ridgeway rejected a lawsuit by Republican Mark Harris insisting he be declared the winner. Harris narrowly leads Democrat Dan McCready in the 9th District contest, but the numbers have been clouded by doubt because of allegations that mail-in ballots could have been altered or discarded by a Harris subcontractor.

Harris’ attorneys asked the judge to step in because they said the district in south-central North Carolina urgently needs a representative in Washington. The Republican’s attorneys also argued they were forced into court because the now-disbanded elections board was supposed to have declared him the winner in November, delayed acting to sort out ballot-fraud allegations, and missed all the deadlines specified in state law to certify him as the winner.

An unrelated lawsuit led to the disbanding of the old elections board last month, but the staff’s investigation into accusations of ballot fraud by an operative hired by Harris’ campaign continues. A revamped elections board will officially be in place as of Jan. 31.

It is that board that “will be in the best position to weigh the factual and legal issues” to conclude the rightful winner, Ridgeway said after two hours of arguments. “The court concludes that the petitioners have not shown a clear right to the extraordinary relief” Harris requested.

Democrats who this month took control of the U.S. House said they wouldn’t seat Harris without an investigation into the allegations and suggested they may examine the dispute no matter what the state elections board does.

McCready attorney Marc Elias, who represents Democrats around the country in election disputes, said some states such as Florida have laws placing a priority on elections being determined quickly, while other states such as Minnesota allow more time for resolutions that conclusively decide the rightful winner.

“North Carolina has made a judgment to be a get-it-done-right state. In doing so, it has set forth a very, very clear set of deadlines that are put on pause, or on hiatus, pending a protest,” Elias said.

North Carolina’s since-disbanded elections board twice made bipartisan decisions in late November to withhold certifying the Harris-McCready election under a provision in state law that allows it to act if it suspects balloting was tainted by some type of fraud or corruption.

Harris’ lawyers said he and his wife have submitted to interviews by investigators and his campaign has turned over documents to ensure the investigation is done right and his name can be cleared. But the elections board also can’t operate on its own timetable, attorney Alex Dale said.
“They cannot do this open-endedly,” he said.

The questions surround a political operative in rural Bladen County, Leslie McCrae Dowless, who worked for Harris’ campaign at the candidate’s insistence. Dowless has declined interviews. A statement by his attorney said he is innocent of any wrongdoing.

More than a dozen witnesses signed sworn affidavits alleging that Dowless or people working for him collected incomplete and unsealed ballots from voters. It’s illegal for anyone other than a close relative or guardian to take a person’s ballot.

Harris, the former Baptist pastor of a Charlotte megachurch, said he didn’t learn until late last month that the state elections board investigated Dowless and others potentially involved in ballot fraud in 2016.

“I would later learn that obviously there had been things that should have been looked into, but everything that had been looked into had come out just perfectly fine,” Harris said in one of several television interviews earlier this month.

Neither Harris nor McCready has responded to interview requests from The Associated Press.

The state elections board, which has no power to prosecute election cases, forwarded its evidence from the 2016 election to the federal prosecutor’s office in Raleigh, which has not said whether it will pursue charges.

McCready, an Iraq War veteran and head of a solar-energy investment firm, said last week that Harris should be prosecuted if he participated in election misconduct.