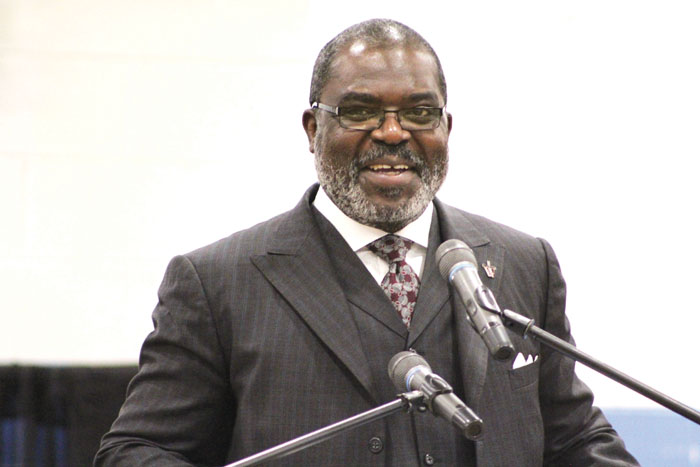 The masses were drawn by the Salisbury Human Relations Council’s annual Dr. Martin Luther King Jr. Celebration Breakfast, held each year to honor the life and legacy of the minister and civil rights icon.

The event began with a time of solemn remembrance as Salisbury Mayor Al Heggins and the Rev. Fleming Otey rang a bell five times. Each stark ring represented a year of time, as it took Congress five to pass a bill to celebrate and honor the birthday of King, said Human Relations Council Chairman Dennis Rivers.

Though many who spoke during the program took time for reverence, the celebration would live up to its name as community members praised local progress toward equity.

Heggins said that, if King had still been alive, he would have wanted to celebrate in Salisbury.

“He’s going to say ‘You make me proud,'” she said. “‘Here you are, a city who’s moving forward to pass a Resolution of reconciliation …. a city moving forward with looking at the disparity that we have in housing and establishing a fair housing committee.'”

The keynote speaker for the event was the Rev. Dr. Dwayne Anthony Walker, a graduate of Livingstone College and pastor of Little Rock A.M.E Zion Church in Charlotte.

Walker said that, although much progress had been made since King’s assassination, the nation at large was lacking.

To resounding applause, Walker criticized the nation’s current political climate, saying that the president had done more work to divide than unify, resulting in an impasse.

Borrowing a question posed by King, he then asked, “where do we go from here?”

Walker encouraged attendees to “remember who we say we are as a nation and strive to be just that,” This included remembering the work done by our ancestors to ensure equal access for all to all that the nation had to offer.

This was the overriding theme of King’s speeches, he said.

“It was always about leaving the world to understand that there is a place and a purpose for us all,” he said. “He insisted that every person be afforded the opportunity to discover their God-given right to be the best they can be and to help others do the same.”