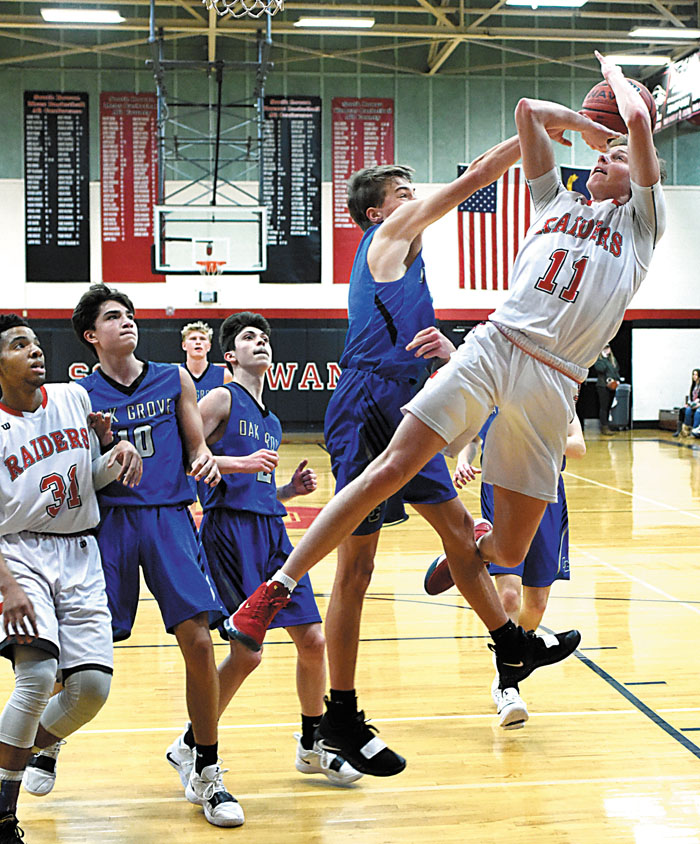 South's Jarron Hines 11 fouled at the basket. . photo by Wayne Hinshaw, for the Salisbury Post

LANDIS — It’s not often that South Rowan’s boys are the older, more talented team, but that was the case on Monday afternoon in the South gym.

The Raiders got 21 points from sharpshooting Jarron Hines and a pile of fourth-quarter rebounds from Brenden Finger and held off Oak Grove, 71-64, for a Central Carolina Conference victory.

It still wasn’t easy for the Raiders. South coach Andre McCain breathed a sigh of relief when the wild ride was over.

“Oak Grove is scrappy and if they keep doing what they’re doing they’re going to be a really good team before too long,” McCain said. “But this one could’ve been easier for us. We built a good lead, but then we let them back in it. When we get someone down, we’ve got to keep attacking and put them away.”

South hasn’t had many people down. The win was just the 10th for the patient McCain, who is in his fourth season as South’s head coach. No one wins without players, and South has generally been outmanned during his tenure.

The point total was a season high for South, which hasn’t been able to break 50 in 12 of its 15 outings.

“It was nice to score like we did today,” McCain said. “We’re capable of scoring like that. We’ve just got to finish more of our layups.”

The teams battled on even terms in the first quarter, but South got a trio of second-quarter buckets from Andrew Jones to take a 36-26 lead to halftime.

“I thought we lost this game with a flat second quarter,” Oak Grove coach Todd Rausch said. “That was the big issue. We struggled for eight or nine possessions in a row. That let South Rowan get confident and let them get very comfortable shooting the basketball. They got a lead. We never caught up.”

Hines, who made four 3-pointers, got hot in the third quarter from the left corner. He enjoyed a 10-point quarter. South went up by as many as 18 points and threatened to blow out the visitors, but the OG Grizzlies fought back to a 52-40 deficit by the end of the period.

“Hunter Morrison (former South standout) helped me fix my shot,” Hines said. “I hadn’t been following through on my shots, but I did today. This was the best my shot has felt all season. Everything felt good. Everything felt like it was going in.”

Finger helped Hines get rolling by finding him on a fast-break, then locating him again wide-open in the corner for one of those 3-balls.

Oak Grove kept its rally going in the fourth quarter and got within seven points several times. Oak Grove did a good job of taking it right to the rim in transition and drew fouls. Most of the Grizzlies’ comeback was due to 11 made free throws in the final period.

“I like the way our guys responded and attacked in the fourth quarter,” Rausch said. “We need to play like that for a whole game. That’s when we’ll grab a win.”

South didn’t have a firm grip on victory until Barrett Thompson made the front end of a one-and-one with 1:38 remaining for a 66-58 lead, and Finger immediately followed with a block at the rim and a rebound in heavy traffic. When Finger made two free throws with 1:09 remaining, the Raiders were back ahead by double digits and out of danger.

“We did a pretty job of beating their pressure when they pressed,” McCain said. “We got the ball to the gaps and we got a lot of layup opportunities and open shots. Defensively, we’ve got to do a much better of job of getting back and getting set up, but offensively, we did good things. We made the right passes and we made some shots.”

NOTES: South is home against a powerful North Davidson squad on Friday, while Oak Grove plays at Central Davidson. … Monday’s game was a makeup. South will go to Oak Grove on Jan. 29. … Braden Graham hit two 3-pointers and scored 12 for the Raiders. South got 10 points from Finger and eight each from Jones and post man Jayden Dextraze. … Jacob Johnston, an aggressive junior guard, scored 22 for the Grizzlies. He poured in 34 on Friday against North Davidson in a 109-84 loss.