Scouting for Food will begin Saturday 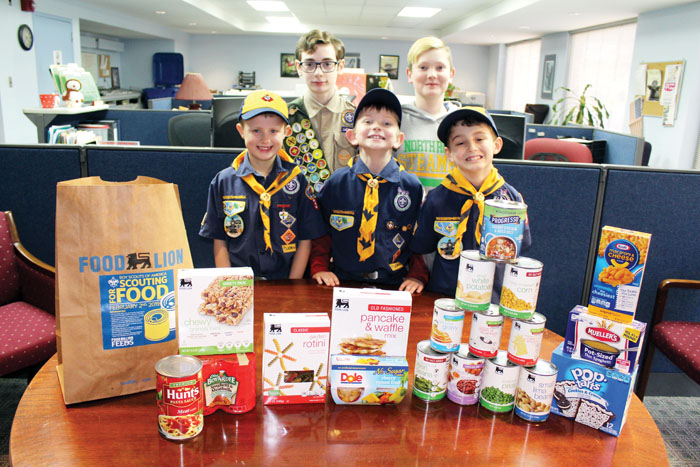 You may have seen them out and about this time last year: Hundreds of uniformed Cub Scouts and Boy Scouts, roaming neighborhoods and distributing paper grocery bags.

A week later and they returned, collecting the sacks now filled with donated food items.

Both efforts were part of the annual Scouting for Food food drive, a national tradition carried on locally by members of the Scouts’ Sapona district in Salisbury-Rowan.

On Saturday, Jan. 26, the drive will kick off once more as Scouts and chaperones visit neighborhoods and churches to distribute bags for nonperishable donations.

His fellow pack member Junior Lyerly agreed, saying his favorite parts of the effort were “that we’re being nice to people and bringing them food.”

The two-phase effort will this year conclude on Feb. 2, when Scouts return for collection.

Sapona district chairwoman Ann Barber said Scouting for Food began in 1985 in the midwest with an Eagle Scout project.

The hope was to find a project that would reach out to a need in the community, she said, but the Scouts found the need so great the effort extended nationwide.

“We picked this time of year because it’s after Christmas,” said Barber. “People are in cold weather conditions. … A lot of times, seasonal workers are out of work, … they have lost wages.”

Others with fixed incomes are facing larger electric and heating bills or emergencies caused by inclement weather.

They will return the next week, Feb. 2, to collect and deliver donations.

Donations should be nonperishable with sturdy packaging. Barber requests that no glass items be donated, as young Scouts are often responsible for the pickup.

She said that, after consulting with pantry coordinators, some specific needs have been identified.

“A lot of people that use these pantries are on a fixed income and also have medical bills,” said Barber. “They have conditions that require food items with low sodium or natural sugar.”

Pantries are also seeking portable, ready-to-eat items like fruit cups and granola bars for clients without places to cook, or items suited to younger palates.

“We always tell people that if you want to give some, give what you would like to have,” said Walker.

The Scouts will accept cash or checks made out to Rowan Helping Ministries, with each $1 donation equating to 7 pounds of food.