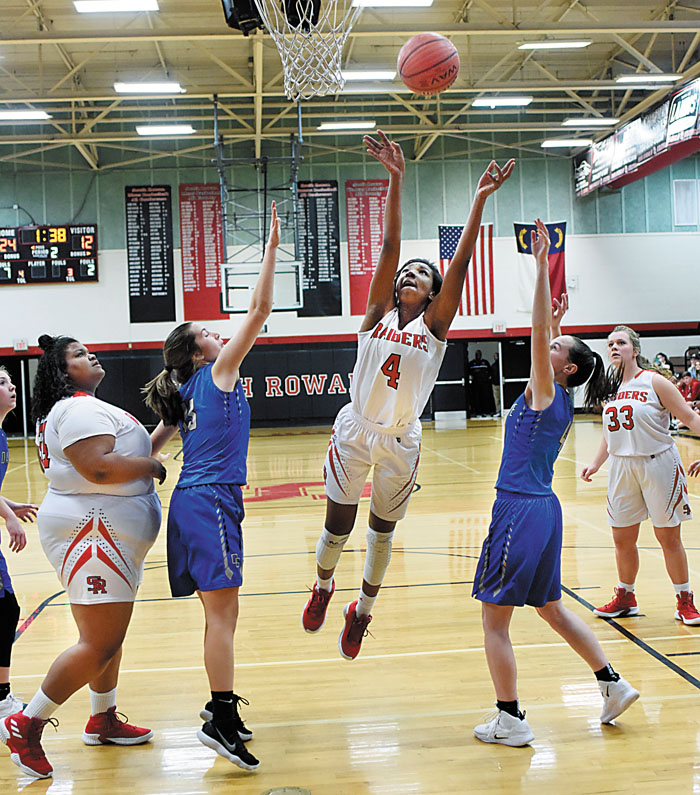 LANDIS — The game wasn’t too grand, but South Rowan senior Janiya Downs got her two grand.

“Janiya is in elite company with 2,000 points,” South head coach Stacy Ellis said. “I know she’s knocked down a lot of accolades, but the most important thing is she’s still an awesome kid as well as an awesome player. I wouldn’t be making the drives I do from Greensboro to coach this team if she wasn’t such an awesome kid. I’m glad I could be here for this moment.”

Downs reached the milestone by muscling in an “and-one” bucket with 1:36 left in the second quarter. She needed 17 points coming in to reach the magical figure. She finished with 27 points, 15 rebounds, five steals and three blocks.

It was a pretty routine day for Downs, except that she got her fourth foul on an over-the-back call (it was a good call) with 2:04 left in the third quarter. She had to be extra careful after that.

Downs isn’t blessed with the supporting cast she had last year (graduates Riley Corriher and Tazah Hardin combined for more than 1,400 career points), so she has to avoid fouls.

“I’ve been in that situation a few times this year,” Down said. “I’ve learned when to be aggressive and when I have to back off a little bit.”

The best thing about the day for Downs was that the Raiders won. That made the red post-game cupcakes taste a lot sweeter.

The night when Downs got her 1,000th point — very early in her junior season at home — South fell to Ledford and point guard Lyrik Thorne, who scored her 1,000th point that same night. Thorne is frequently spectacular and reached 2,000 career points on Jan. 11. Thorne also has signed with Catawba.

“I remember that night when I got 1,000 —  I was so nervous,” Downs said. “But I really wasn’t nervous at all tonight. I think my teammates were more nervous than I was.”

The Raiders looked antsy. They missed layups, made shaky passes and fouled a lot. The outcome was still in some doubt until freshman Bethany Rymer, who had a fantastic second half, and Downs scored back-to-back in the fourth quarter.

“We just didn’t have a lot of intensity for this one,” Ellis said. “All the girls were excited about the moment for Janiya and they had some things planned for after the game. We know we have to be ready to play every game, but we just weren’t at our best. When Madison McGuire is making 3s, Lauren Shell is playing big inside and Janiya and Bethany are attacking, that’s when we’re a basketball team that can beat a lot of people.”

Downs only made one deep shot, but whenever she got into the paint, she scored. South jumped to a 10-0 lead and was up 16-4 after the first quarter. Downs and McGuire made 3-pointers in the second quarter. Downs’ bucket for 2,000 accounted for the last points of the first half. After photos and fanfare, the Raiders led at the break, 26-16.

With Rymer and Downs both picking up their fourth fouls in the third quarter, there were anxious moments ahead for South, but both avoided No. 5.

“When you don’t move your feet and you slap at the ball, you get fouls called,” Ellis said. “We didn’t do a good job defensively.”

Free throws enabled Oak Grove to creep within 41-30 with 5:11 left, but then Downs squirmed inside for a bucket. Then Rymer hit a jumper on the move and Downs got a bucket off a steal for a 16-point lead. That burst put the pesky Grizzlies away.

Downs emerged from a happy locker room after the game wearing a wide smile and a T-shirt that read, “Ms. 2000.”

That shirt, a gift from her art teacher, is one that not many people can wear.

NOTES: Downs scored 419 points as a freshman when she missed three games with a concussion. She scored 541 as a sophomore and a school season record 572 as a junior. She’s already scored 478 this season in 16 games, almost 30 per game. She finished Monday with 2,010 career points. Cross totaled 2,019, so Downs should pass her Friday for third all-time in the county when South hosts North Davidson. In 90 career games, Downs has scored in double figures 87 times. Injuries were a factor in two of the three games when she didn’t reach  double figures. … John Davis, who coached Downs her first three seasons at South, was in attendance on Monday.