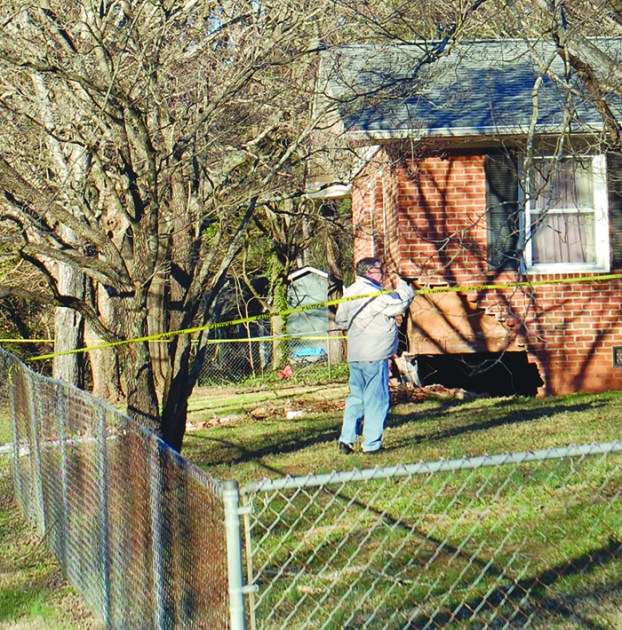 Mark Wineka/Salisbury Post The owner prepares to investigate some of the damage at the left front corner of his house. A vehicle driven by a neighbor lost control at Jacobs Drive and Nestlewood Lane Monday afternoon, traveled through the man's front yard, struck the house, went through a side fence and stopped in a neighboring yard. The car's driver was not seriously hurt, but there was extensive damage to the house.

SALISBURY — A four-door Mitsubishi veered off the road at Jacobs Drive and Nestlewood Lane Monday afternoon, and before it came to rest, the vehicle struck the corner of a house and also damaged the property’s side fence.

The driver, not immediately identified, lives further down Nestlewood Lane, and he told a neighbor who called for emergency responders that he was returning home after purchasing chicken at Bojangles.

A Rowan County EMS unit took the man to the hospital, but he was not believed to be seriously hurt. There was significant damage to the left front corner of the brick ranch house the car hit.

When the Mitsubishi left the street, it first went into the corner home’s driveway before veering through the front yard. After it struck the house, it continued left through a side chain-link fence and came to rest in a neighboring front lawn.

The driver’s side airbag deployed.

Jacobs Drive is located off U.S. 601 not far from the end of Jake Alexander Boulevard.

Fight for opioid use continues: Overdose numbers are down, but abuse is still rampant

By Shavonne Walker shavonne.walker@salisburypost.com SALISBURY — While the number of people reporting to the local ER for opioid overdoses may... read more