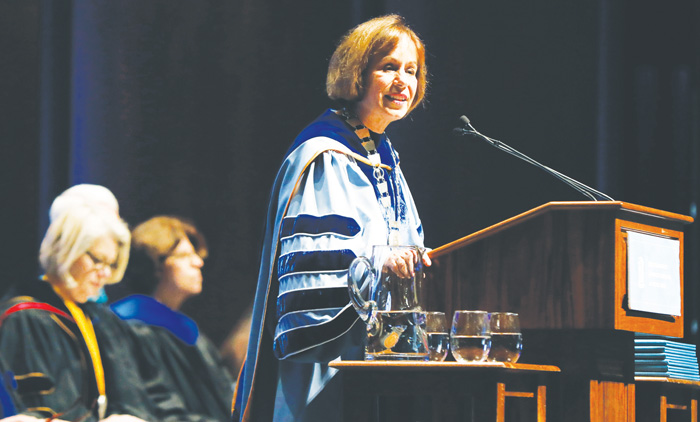 The Tar Heel titans “worked across differences for the common good,” she said in 2013.

But Folt was pushed out last week amid an ongoing culture war about what, exactly, is the common good.

The chancellor of the University of North Carolina’s Chapel Hill campus called out heavy equipment early Tuesday morning to remove the marble base of a Confederate statue that was ripped down in August. Her unilateral action makes it harder to restore the campus memorial to UNC students who fought for the slave-holding states.

Folt said she acted to protect public safety because the pedestal remained a focal point of passionate protests, both pro and con. The statue nicknamed “Silent Sam” had stood on a prominent plaza named for a slave-owning educator since 1913, when it was dedicated with a white-supremacist speech by a former Confederate.

Also pushed out was Margaret Spellings, the nation’s education secretary under President George W. Bush who resigned in October as president of the UNC System.

The episodes are fresh evidence that more than 150 years after it ended, the Civil War remains a cultural fault line for many Southerners.

But the ousters also represent the revenge of conservative Trump voters against university academics who seem culturally alien, said Jay Schalin, policy analysis director at the James G. Martin Center for Academic Renewal, a Raleigh-based conservative think tank. Their representatives, who dominate the state’s legislature and university system’s board, told Folt and Spellings to leave weeks earlier than they planned to go.

“We are essentially seeing the national culture war being played out in a local arena,” Schalin said. “We are seeing a new dynamic in America, in that many of the people who have not had a voice are now getting a voice. And it’s being played out in the UNC system and on the UNC-Chapel Hill campus.”

Similar skirmishes have taken place at public universities in Nebraska, Iowa, California and Alabama in recent years, but they go back decades — at least since the blowback against teaching evolution and long before 1960s campus radicalism.

Most Americans think the country’s higher education system is headed in the wrong direction, a Pew Research Center survey last summer found. About three-quarters of Republicans objected to professors bringing their political and social views into the classroom. About the same proportion thought there was too much concern about protecting students from views they might find offensive.

Spellings resigned after friction with the public university Board of Governors. Board members second-guessed her choices to name chancellors who run campuses and her own safety concerns about”Silent Sam after a violent 2017 white-rights march in Charlottesville, Virginia.

Folt’s standing with the governing board was unclear before her surprise move. The former biologist who left the Ivy League’s Dartmouth College for Chapel Hill had overseen a fundraising drive that raised more than $2 billion as of last summer, half of its ambitious goal. The university’s research funding grew by 13 percent to $883 million under Folt.

She received the largest raise among state campus leaders in December 2017, three months after board members criticized her for not taking a hard line against post-Charlottesville demonstrators demanding Silent Sam’s removal.

But last summer, Silent Sam was ripped off its base. Folt got no bump to her $633,000 salary three months later.

Folt’s campus trustees and several big fundraisers have said they support her. Most professors probably felt it was best for Silent Sam to go, but even more agreed the issue has festered for too long and needed resolution, said North Carolina Central University law professor David Green, who heads the group representing faculty on all 17 campuses.

The “culture of academia is very strongly in conflict with a great deal of the country,” Schalin said. “The campuses cannot remain one-sided and expect to get funding and be treated with respect by everybody.”

But demanding conservative orthodoxy would threaten the Chapel Hill school’s top reputation, said Stephen Trachtenberg, president emeritus at George Washington University in Washington. The purpose of the university is to foster exploration and debate by weighing both the conservative and the revolutionary, he said.