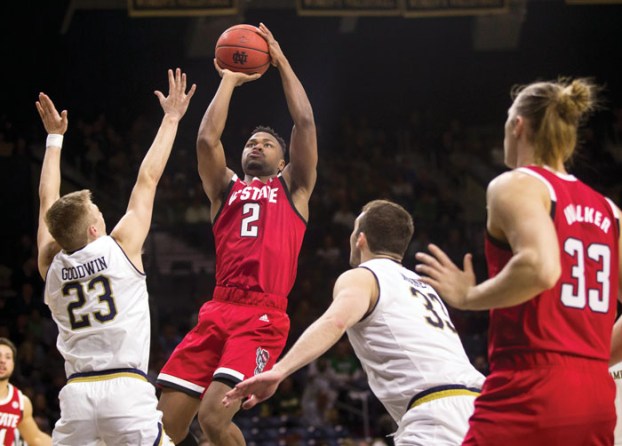 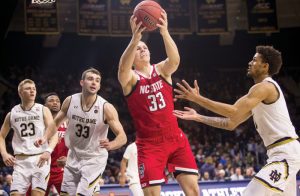 A strong finish against the pesky Fighting Irish was the only medicine Keatts needed.

That wasn’t the case last Tuesday, when NC State fell way behind Wake Forest, tied it with about six minutes left in the second half and still lost, 71-67.

T.J. Gibbs made three free throws and fed John Mooney for a dunk to pull the Irish within 75-73 with 12.3 seconds left. But Daniels made his final two free throws, and the Wolfpack prevailed.

Bryce hit 9 of 14 shots, including all five of his 3-point attempts. Torin Dorn had 13 points with nine rebounds, and Derek Funderburk added 11 points.

“To beat one of the better teams in this league, we’re going to have to shoot better than 40 percent,” Brey said. “(The Wolfpack) are really gifted offensively, and they beat us up in the paint. We battled, but they were men and we’re a little young.”

The Wolfpack set season lows in field-goal percentage (37 percent) and 3-point shooting (20.7 percent) in the 71-67 loss at Wake Forest. They beat the Irish with 43.5 percent shooting, including 36.8 percent from deep, including the 5-for-5 effort by Bryce, who also played for Keatts at UNC Wilmington.

“I’ve been waiting on (Bryce),” Keatts said. “That’s the guy who played well (at UNC Wilmington) when he played for me. This was, by far, his best game in an NC State uniform.”

Notre Dame: Fighting Irish again endured scoring droughts at inopportune times — going 2:31 while hitting 2 of 12 in the first half, then pulling within one with 8:26 to play and going more than three minutes without a field goal.

As Winter Storm Harper chilled the area, the less-than-capacity crowd at the Purcell Pavilion celebrated by wearing Hawaiian shirts and leis. One enterprising student even brought a surfboard to the game.

NC State: At Louisville on Thursday.