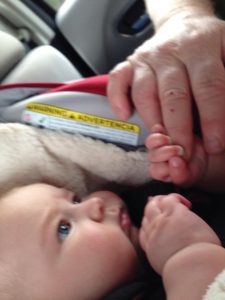 There is nothing in this life quite like that moment when you hold a newborn grandchild for the first time.
You look into each other’s eyes, and you marvel at Nature’s Plan, which has ordained that you would gladly lay down your life without a second thought for this little bundle of sweetness and blanket. And then, without wasting any more time, you turn to the serious business of imparting generational wisdom, to wit:
Meat is good. You know that she has good genes because her mother at a tender age would return from the buffet table with a plate laden with carved roast beef, pork tenderloin, turkey, baked ham, smoked salmon, and a roll.
When baby’s little front teeth come in, her first desire is smoked turkey, followed in short order by grilled venison tenderloin, deer burgers, and barbecue (I won’t insult anyone by adding the word “pork;” we all know there is only one kind of barbecue in North Carolina).
She has developed well ahead of the usual pace: last week, she began to stare longingly at my turkey sausage stick, somewhat like a [insert here brand name of familiar beef sausage stick available in every convenience store in the nation], but for the semi-health-conscious consumer.
I couldn’t refuse her, but I did carefully pull off the tough outer casing and give her little pieces of the inside. After one bite she smiled, and suddenly the whole tray of carefully diced grilled chicken breast pieces was swept onto the floor, precipitating her next favorite pastime besides eating — watching the dogs gobble up her rejects. I imagine chorizo is next.
Country music is good. When Grandma is in charge, they always enjoy a little late afternoon session of Latin jazz or a Pandora station of music for kids featuring songs by well-known children’s music artists like Raffi and Jewel (?). I am not as adroit with the latest music technologies as basically anyone else in the developed world, but I did figure out the other day that I could play a list of 50 Great Country Hits on my tablet.
The baby swayed slowly from side to side and seemed a bit melancholy as she listened for the first time to “He Stopped Loving Her Today.” She smiled, danced and shook a little maraca from her baby instrument pack while listening to “Ring of Fire.” But then she jumped up on my lap in wide-eyed terror as Conway Twitty intoned “Hello, darlin.’” I quickly went on to “Coal Miner’s Daughter.” Still developing…
Getting dirty is okay. I took my older granddaughter when she was a toddler to the Lazy 5 exotic animal ranch, a few miles from my house. We boarded a tractor-drawn hay wagon with about a dozen others, mostly Modern Mommies and their charges. The first stop was to see the giraffes. Each family received a small bucket of food, and we were instructed to hold a little food out on an open palm to feed the giraffes. You should have seen the looks on the faces of those kiddies when giraffes with eyes the size of tennis balls bent over to lick the food out of their hands!
What really amazed me was that every single Modern Mommy whipped out a bottle of hand sanitizer and began pumping furiously after every lick. A woman with twins had two bottles in what appeared to be a double shoulder holster.
I must admit that all I brought along was a box of apple juice and a couple of Tootsie Rolls. I wouldn’t be surprised if those poor giraffes wind up in detox one of these days…
Miscellaneous. And then there are the knowledge and skills that are passed along more by osmosis. My wife tells me that the other day the baby grunted loudly every time she bent over to pick something up. Sometimes the grunt wasn’t timed right, giving the impression that it was somehow studied and not truly natural.
I can’t imagine where she picked that one up… I do know, however, where she first heard “Dang it!” — a new staple of her vocabulary — and it wasn’t from me, Grandma!