Ever the character, Charlotte Taylor hits 100 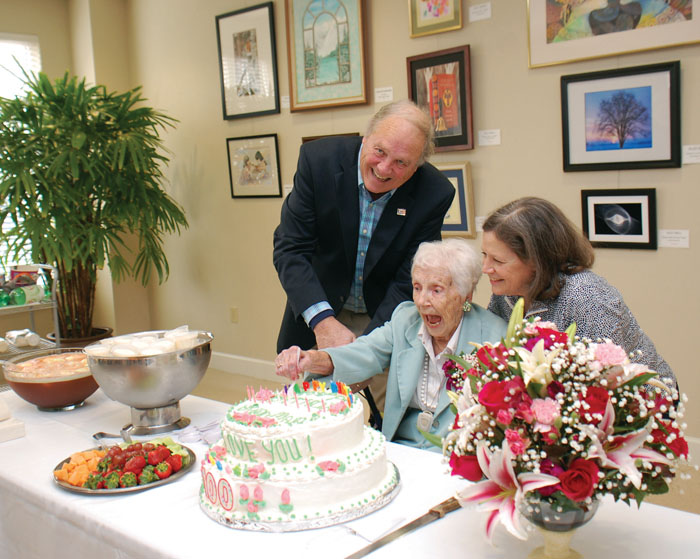 SALISBURY — It seemed providential. Earlier in the day, Frances Edwards had been telling someone how proud she was of the early work of her mother, Charlotte Taylor, establishing hospice care in Salisbury.

She wasn’t sure, Frances said, but she thought Charlotte had worked with folks such as Garnelle Sapp and Robert Saunders to found the first hospice organization here.

“She saw the need because she lost Anita,” Frances said.

Charlotte Taylor’s other daughter, Anita, died of cancer in 1978 at just 33 years of age.

Later Friday, Frances was waiting for a flower delivery at the entrance to Trinity Oaks, where a big reception was planned in the upstairs meeting room for Charlotte Taylor’s 100th birthday.

Frances struck up a conversation with the Rev. David Nelson, who had been visiting the retirement community, when he happened to tell her he had served with Charlotte on the original hospice board.

So there was confirmation. There, maybe, was some kind of sign for the celebration to come.

Fast forward to the party, and Charlotte Taylor had a grand time Friday afternoon sharing her 100th birthday with more than 50 friends and family. There were no speeches but plenty of cake, ice cream, punch and picture-taking.

Charlotte delighted in all the family photographs being shown on a big screen at the reception, and she enjoyed a special “Happy Birthday” serenade from her favorite singer at Sacred Heart Catholic Church, John Brincefield.

Always a bit devilish, Charlotte tried to feed Brincefield cake while he knelt on a knee before her and sang the song.

“She is a character,” Frances says. “She will not say anything behind your back that she won’t say straight to your face. She was the one who chaperoned the beach parties for my sister and me. She was a great mom.”

As a kid, Frances once told her mother she was bored. Charlotte gave her a trowel and told her to go outside and dig up weeds in the flower bed. That cured Frances of any future bouts with boredom.

“She has always been fun,” Frances said, “and she always has been one step ahead of me.”

Charlotte Taylor seems to have stayed young at heart at Trinity Oaks, where she has lived in assisted living for the past four years. She moved to the retirement community in 2000, residing at first in one of the cottages before moving into an apartment when she turned 90.

She spends her days playing noodleball, bingo, brain games and bridge, when she can muster up three others who know the game. She participates in chair aerobics and enjoys when people come in and play music for the residents.

In other words, she stays as active as she can.

“It’s a wonderful place,” Frances said. “Trinity Oaks is probably instrumental in her having this wonderful life she has.”

Charlotte Ruffner Taylor was born 100 years ago in Blacksburg, Virginia, but her family moved to Raleigh when she was 6 months old. Her father was a professor in animal husbandry at N.C. State University for 30 years.

As a girl and young woman, Charlotte loved riding banker ponies, which were some of the wild horses adopted on occasion from coastal locations such as Ocracoke Island and Shackleford Banks.

Frances can still put her hands on some worn riding boots that belonged to her mother.

Charlotte attended Catholic schools, including St. Mary’s College. She met her future husband, Charles “Chuck” Taylor, after he had transferred to N.C. State from Ohio State, where he was a football player.

Charlotte has always liked to tell people she earned her “MRS. degree” at State.

She married Chuck Taylor, who was majoring in ceramic engineering, when she was 24. That was in 1943, when Taylor was serving in the Army Air Corps and was part of a bomber group in the Pacific theater during World War II.

The Taylors came to Salisbury after the war when John Henry Isenhour of Isenhour Brick hired Chuck to build him some kilns. Chuck and Charlotte stayed in Salisbury as he went on to establish Taylor Clay Products, which son Charles now oversees.

The Taylors have had a big heart for the community. Chuck Taylor was probably the biggest benefactor and supporter of the Waterworks Visual Arts Center, and Taylor Clay donated the bricks that went into the state’s Vietnam Memorial along Interstate 85 in Davidson County.

Chuck and Charlotte had been married just shy of 50 years when he died at their home in 1992.

In Salisbury, Charlotte Taylor became a homemaker and heavily involved herself in Sacred Heart Catholic Church, the PTA, hospice and the Relief Circle of Women who work at the Rotary Club on Tuesdays.

Frances said her mother helped with the Relief Circle for maybe 40 years. “She still asks me if I need a sub,” added Frances, who also is a Relief Circle member. “That was something that was big for her.”

Charlotte had a green thumb when it came to her gardening, and she often provided flowers for the altar at Sacred Heart.

Charlotte Taylor’s biggest health scare in her century of living came 32 years ago when she had cancer and won that battle, Frances said. Today, Charlotte has to have at least one physical each year, as required by Trinity Oaks.

“Because they make her,” Frances said.

Frances enjoys telling a story from several weeks ago when she was visiting with her mother, who couldn’t understand why Frances didn’t know where her children were. Frances explained the kids were long grown and on their own and noted she already is 65 herself.

Yes, Charlotte, you are officially 100.