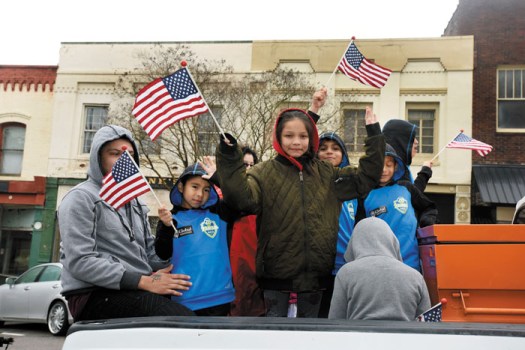 Members of the Zamba Soccer Club rode on a trailer waving American Flags in the parade.. photo by Wayne Hinshaw, for the Salisbury Post 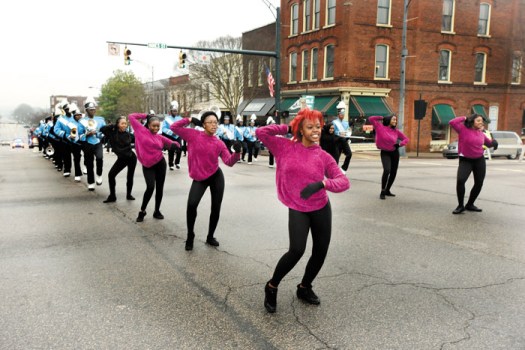 The Salisbury Parks and Recreation bus with waving children in the parade. photo by Wayne Hinshaw, for the Salisbury Post 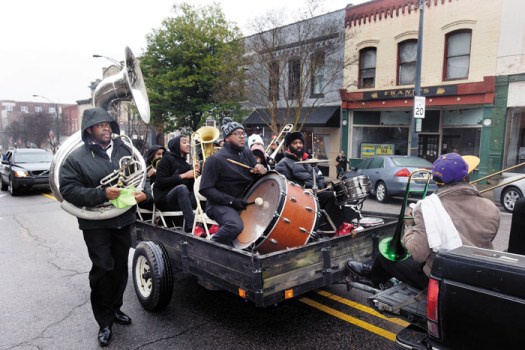 The House of Prayer Band provided some jazz music in the parade. photo by Wayne Hinshaw, for the Salisbury Post 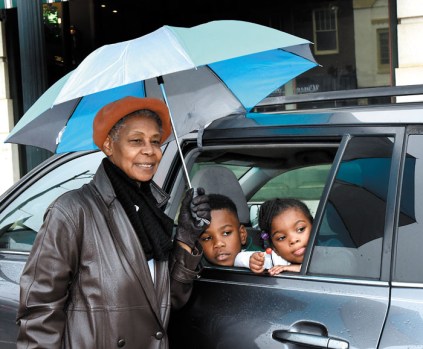 Sarah Norman brought her grandchildren, Kinston Carter and Kinsleigh Normant to see the parade. photo by Wayne Hinshaw, for the Salisbury Post

The parade, hosted by the Dr. Martin Luther King Jr. Celebration Committee, part of the Human Relations Council, brought together roughly 57 groups to honor the birth of the man who brought freedom and hope to many. But participants also acknowledged that there was work still to be done. Interspersed between bands and local schools were groups that fight for others to have an equal seat at the table — including Salisbury Pride, PFLAG, Mission House and the local chapter of the American Federation for Government Employees — a union for federal workers.

Federation workers marched in Saturday’s parade carrying signs that called for an end to the government shutdown, which at nearly 30 days is the longest in U.S. history.

“I think this is a very appropriate place to have our little rally,” Rosetta Sloan, secretary treasurer of the local chapter, said.

According to Sloan, when King was assassinated on April 4, 1968, he was fighting for workers’ rights.

“We have strides to go but he sure did give us a foundation,” she said.

And while times were tense, Sloan and others were encouraged by Saturday’s turnout, and by the willingness of people to step up in the continuing battle for equal rights for all.

“As long as we still have people fighting for those causes, we are hopeful,” Sloan said.

A group of students from Rowan County Early College’s Cultural Awareness Council said they were proud to be a part of the celebration.

“We love doing things like this,” student Cristina Guerrero said.

The group provides information and raises awareness for different religions, cultures and other groups. So while the students are no stranger to events like the parade, Saturday still held a special place in their hearts.

“It’s kind of like an honor,” Jayden Burns said of marching in an event honoring King.

Residents who turned out to watch the event said it was heartening to see young people involved — and young people watching. Shameka and Danny Smith came out with young children Thomas and Zoe. Danny said King left a legacy of “radical change” which offered the “opportunity for regular people to be heard.” It was a lesson he wanted to pass on to his own children.

While he and Shameka said it was a shame that the parade wasn’t better attended — whether due to a persistent drizzle or other factors — they were happy they’d been able to make it.

“The fact that we’re here, the fact that our children are here — that’s important,” Danny said.

The parade ended at the Salisbury Civic Center, melding seamlessly into the next event honoring King: a community gathering offering music, food and access to local resources.

“So making sure we not only have a good time but we also know what resources are available,” Dennis Rivers, chair of the Human Relations Council, said.

“A lot of people don’t even have the access to know they need them,” he said.

So Rivers and others brought the resources to them. Representatives from the city of Salisbury, local colleges, Smart Start Rowan and Hotwire, among others, set up booths Saturday afternoon to provide information and services to anyone who stopped by.

It’s an event that fits in perfectly with Dr. King’s work, Rivers said, which centered around ensuring all voices were heard.

“We want to have an opportunity besides festivities to bring everyone together,” he said.

Mayor Al Heggins said she thought King would be pleased with Salisbury — both for a recent move to establish a fair housing committee, and for the festivities.

The guest speaker is the Rev. Dr. Paul Arthur Lowe Jr., who for more than two decades has served as pastor of the historic Shiloh Baptist Church of Winston-Salem.

The 2019 recipients of the Humanitarian Awards are Greg Alcorn, George Bates III and Dorothy Gill-Smith and the organizations Communities in Schools of Rowan County and A Bridge 4 Kids.

On Monday, the town of East Spencer will have a commemorative march to celebrate the King holiday.

Participants are asked to assemble at 11:30 a.m. in the parking lot of Southern City Tabernacle AME Zion Church at 940 S. Long St. The march will begin at noon and proceed down Long Street to East Spencer Town Hall.