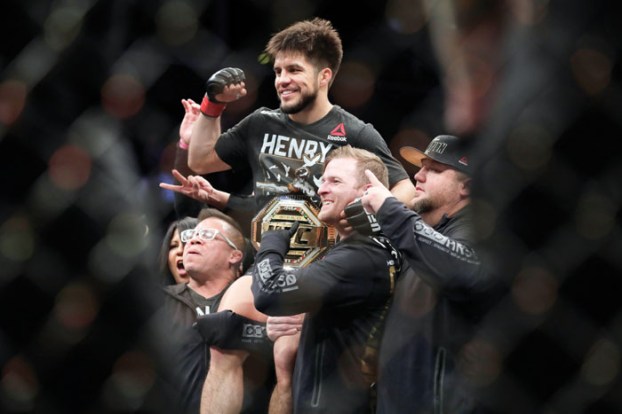 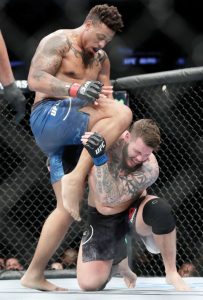 Greg Hardy knees Allen Crowder on the head during the second round of a heavyweight mixed martial arts bout at UFC Fight Night, early Sunday, Jan. 20, 2019, in New York. Crowder won the fight after Hardy was disqualified for an illegal knee in the second round. (AP Photo/Frank Franklin II)

By DAN GELSTON, AP Sports Writer
NEW YORK (AP) — Henry Cejudo needed only a record 32 seconds to defend his 125-pound title in New York. Cejudo’s next defense was a passionate one for the flyweights — and the hope that the pounding he put on T.J. Dillashaw early Sunday was enough to keep a sparkling new UFC title belt around his waist for more than one fight.
Cejudo turned champ vs. champ into a super quick mismatch.
Cejudo made the first main event on ESPN-plus the fastest finish ever in a flyweight championship fight. Cejudo was a buzzsaw at Barclays Center and never let Dillashaw, the 135-pound champ, catch his breath in a blink-and-miss it finish.
UFC President Dana White wrapped the new title belt — created to signify the company’s new era on ESPN — around Cejudo’s waist as the crowd booed the quick end.
Cejudo might not get another title defense. He defeated longtime champion Demetrious Johnson to win the belt and reign in a division that has drawn scant interest with fans or serious contenders in the class.
The division is on the brink of extinction and Cejudo made his case all week to keep the 125 pounders fighting. He dedicated the victory to the flyweights in an octagon interview that lasted longer than his fight.
“I hope that’s good enough to keep this weight division alive,” he said.
Dillashaw, the 135-pound champ, used a program devised by a triathlete math professor and performance specialist to cut some serious weight in his attempt to hold championships in two weight classes.
His champ-champ bid was a big bust. Dillashaw, who had a four-fight win streak snapped, complained of the quick stoppage and said he was ready to keep fighting.
“I came in, I felt great. Energy level was good,” Dillashaw said. “I thought it was going to be fireworks tonight.”
Cejudo offered to move up to 135 pounds to fight Dillashaw again — this time for Dillashaw’s title. Dillashaw choked back tears and said he was “bitter” about the short fight and did not feel right calling out Max Holloway for a 145-pound bout.
“It sucks when something’s taken from you and you’re not actually beaten,” Dillashaw said.
Cejudo-Dillashaw headlined the first card of a $1.5 billion, five-year contract on ESPN networks.
But all eyes at Barclays — and thousands of boos — were directed on troubled ex-NFL star Greg Hardy for his UFC debut.
Hardy’s first fight ended with a disqualification loss after he blasted Allen Crowder with an illegal knee to stop the fight in the second round.
Hardy was soundly booed from the moment he walked out to the octagon for the first time since he won a pair of fights on a UFC reality show. He connected on some solid blows in the first round and had answered Crowder’s taunting in the second round with more heavy punches.
But with Crowder down on one knee, Hardy tagged him with a knee and referee Dan Miragliotta immediately separated the heavyweights. Hardy looked confused as medical staff quickly entered the cage and checked on Crowder.
Hardy slumped against the cage on the other side as the crowd erupted in boos and chanted profanities at the disgraced former defensive end who played for the Carolina Panthers and Dallas Cowboys.
“I take full responsibility. It’s something I did on purpose,” Hardy said, apologizing to Crowder.
“It’d be real selfish to sit around and talk about the boos. All I can think about is how I let my people down,” he said.
Hardy left the NFL after he was convicted of assaulting and threatening to kill a woman, with charges later dropped as officials said they couldn’t locate the accuser and believed she reached a settlement with the athlete.
In other fights on the main card, Glover Teixeira choked out Karl Roberson in the first round, Joseph Benavidez defeated Dustin Ortiz by unanimous decision and Grego Gillespie had a second-round TKO win over Yancy Medeiros.
Paige VanZant won her first UFC fight in 2½ years with a second-round submission victory over Rachael Ostovich.
VanZant fought for the first time since she broke her right arm in a bout last January. She made Ostovich tap out to an armbar in the second round for her first win since Aug. 27, 2016.
VanZant and Ronda Rousey are the only women to finish at least two UFC fights with armbars.
“My submission game is really tricky,” VanZant said. “It doesn’t necessarily show well, because I do put myself on the bottom. But I have a slick submission game and I hope people can see that I can pull things off from anywhere. I’m just going to take this as a lesson and get better.”
Ostovich fought for the first time since she was hospitalized from injuries suffered in an alleged domestic violence attack. Honolulu police arrested Ostovich’s husband, Arnold Berdon, who is accused of punching his wife in the head, face and ribs, fracturing her eye socket. Berdon has pleaded not guilty to attempted murder.
Donald “Cowboy” Cerrone could get his desired match against Conor McGregor after he bloodied and beat Alexander Hernandez in a lightweight bout. Cerrone extended his record for career UFC wins with 22 and for finishes with 16.
Cerrone got a quick takedown in the first round and then used a hard knee to the face to bust open Hernandez. The 35-year-old Cerrone finished him in the second in front of a roaring New York crowd.
He called out McGregor in the cage — and the UFC great was listening. McGregor tweeted: “For a fight like that Donald, I’ll fight you. Congratulations.”
___
More AP sports: https://apnews.com/apf-sports and https://twitter.com/AP_Sports