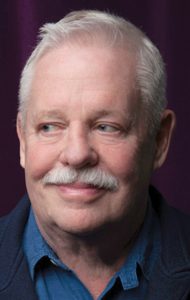 Maupin is a graduate of the University of North Carolina at Chapel Hill, where he organized the installation of a memorial to Thomas Wolfe while serving as senior class vice president. His most recent publication, “Logical Family: A Memoir,” chronicles his odyssey from the south to freewheeling San Francisco, and Maupin’s evolution from curious youth to ground-breaking writer and gay rights pioneer.

Launched in 1976 as a serial in the San Francisco Chronicle, Maupin’s “Tales of the City” series now encompasses nine globally best-selling novels and a Peabody Award winning Netflix miniseries. “The Days of Anna Madrigal,” the final novel in the series, was released in January 2014, premiering at No. 3 on the Independent bestseller list and No. 7 on The New York Times bestseller list.

Maupin’s 1992 novel, “Maybe the Moon,” which followed the comic adventures of a dwarf actress working in Hollywood, was named one of the 10 best books of the year by Entertainment Weekly. “The Night Listener,” published in 2000, a psychological suspense novel inspired by an eerie episode in Maupin’s own life, became a 2006 feature film starring Robin Williams and Toni Collette.

In 1997, Maupin received the Bill Whitehead Award for Lifetime Achievement from the Publishing Triangle of New York. In 2002, he was honored with the Trevor Project’s Life Award for his efforts in saving young lives. Maupin was the first recipient of Litquake’s Barbary Coast Award for his literary contribution to San Francisco. In 2014, he received an honorary Doctor of Letters degree from the University of North Carolina at Chapel Hill. He also received the Visionary Award from the 2014 Outfest Legacy Awards. Maupin is the subject of a new Netflix documentary titled “Untold Tales of Armistead Maupin.”

The VWS will continue with the following authors:

﻿   It was a lovely May weekend with the bluest blue sky. Having almost completed my first year of... read more