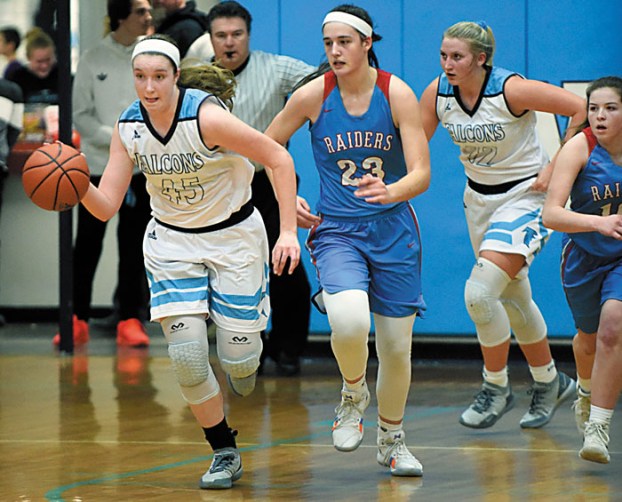 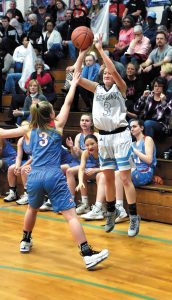 The Falcons were out-of-sync from the start, their burners never ignited and they suffered a costly, 52-48 North Piedmont Conference loss to visiting North Iredell.

“A missed opportunity. I think that’s right on,” coach Ashley Poole said, after West (14-2, 2-1) fell into a three-way tie for first place in the league standings. “I don’t think we played our game. We usually score a lot more than that, but tonight, we were standing around and not attacking the basket. That’s not us.”

West shot only 10-for-30 from the field and was held to a season-low 48 points. Abigail Wilson, its 5-foot-11 junior who averages 24.3 points-per-game, managed a season-worst 12, but corralled 19 rebounds and made three steals.

“We never got into a rhythm,” she said. “We were always chasing and couldn’t get anything going. Maybe we were in our heads too much, trying to do so many things instead of just playing our game.”

“I was really worried about coming in here and playing them,” North coach Roger Bumgarner said. “They have an awesome post player, an awesome guard and a lot of top-notch players that just compete hard. I love to play against teams like that.”

Except that West wasn’t itself. The Falcons never led after Kia Pharr’s layup gave them a 10-9 edge with three minutes remaining in the first quarter. North responded with a 9-0 spree and held a 25-20 lead at halftime.

“We’ve been in spots like that that, but always came back,” said senior guard Mary Sobataka, West’s top scorer with five 3-pointers and 15 points. “Tonight, we came up short. We had momentum at times and then lost it. It went in spurts. We had chances but couldn’t get shots to fall.”

The best player on the floor was North senior Rachel Lalonde, a 6-2 senior who scored 22 points — including the 1,000th of her career. That came on a driving layup and ensuing free throw and gave the Raiders a 50-40 lead with 3:52 to go.

“I remember making the shot,” said LaLonde, who was fouled on the play by West’s Whitley Arnott. “And I remember looking to Addie (Pennell), our point guard, who was open in the corner. I was all set to pass it to her, but all of a sudden it was too late.”

Bumgarner was certainly impressed. “Rachel is a lot stronger than people think,” he said. “They see she’s so tall, but she’s got a strong body. Tonight, we needed a big game out of her and she delivered.”

West made things interesting with a better finish. While the guests misfired on the front ends of three straight one-and-ones, junior Taylor Poole drained a 3-ball from the right side, Arnott backed in for a layup and Wilson muscled inside for two, trimming the Falcons’ deficit to 50-48 with 16.1 seconds on the clock. Sobataka’s last bucket was a 3-pointer from the left corner early the final period, giving her 990 career points.

“I could say something good about Mary every night,” Coach Poole said. “Her defense, her hustle, her leadership and her knack for hitting big shots. I could go on and on about Mary.”

North converted only three of eight free throws in the fourth quarter, but got two huge ones from Mackie Allen that closed the scoring with 9.5 seconds remaining.

“If we make those one-and-ones, it’s probably a little more comfortable for us,” Bumgarner said. “Seemed like we came away empty so many times.”

So did the Falcons.

“We should be in first place right now,” Wilson beefed. “We should have won this game. Instead, we’re tied with two other teams.”