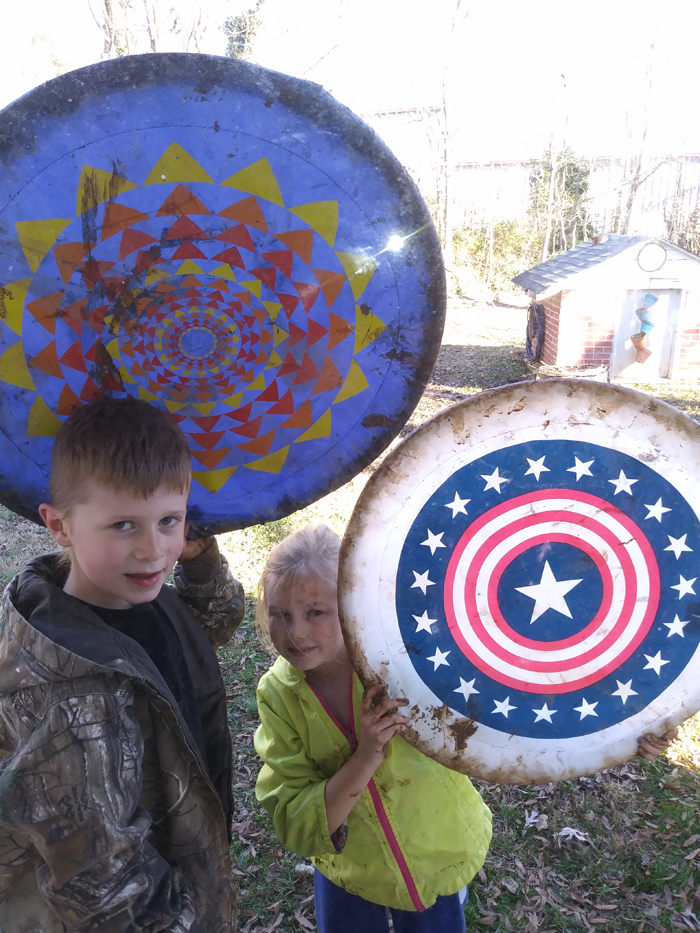 Five bucks each for the big flying discs was probably the best money we’ve ever spent. Submitted photo.

Is it just me or has this been the wettest winter in the history of mankind? The last time I saw the sun was Wednesday a week ago. Two of our grandkids came over to play. After lunch we bundled up and went outside. For the younger readers, bundling in this case has nothing to do with phone or internet service. Bundling is what old people do to stay warm. Anyway, the wind began to blow and the air turned chilly. Actually it was COLD. The kids never slowed down.

Five bucks each for the big flying discs we bought them a few summers ago was probably the best money we’ve ever spent. Those things caught the breeze and sailed like kites on the beach. As the kids chased them, the mud in our backyard literally sucked a boot right off Marie’s foot as she ran. Jesse paused just long enough to retrieve it and pass it to his sister while she held her sock foot up waiting. Off they scrambled again snatching flying discs from the air.

Suddenly Jesse’s feet flew out from under him and he landed flat on his back. Slowly he sat up with his whole backside covered in mud. It was in his hair, down his neck, all over his coat and jeans.

At least his boots were still on but only because they were the lace up kind. Again the kids were laughing that deep belly laugh that only comes on rare occasions. For me it’s usually in church or somewhere I’m supposed to behave. I do not know how to chuckle quietly. Those kids had me laughing so hard. Now our backyard looks like a heard of pigs ran through it. Did I say pigs? I meant to say sweet little lambs. What a mess!

After hot baths and clean clothes from their grandmother’s stylish wardrobe of vintage t-shirts and fuzzy socks, the pair curled up on the sofa for an episode of Wild Kratts. Okay, so we may have watched five or six. I smiled as the kids’ tired little bodies relaxed into the soft warm quilts and their eyes grew heavy.

When their mother came for them I assured her that they’d sleep well that night. As soon as they were out the door I curled up in a recliner with a blanket and napped for a good solid hour. I was worn slap out. Their mom sent me a video of them that night. There was a mattress on the floor and they were jumping on it like a trampoline. Apparently they were not as tired as their Grammy.

Usually there’s a moral to my story. I’m not sure there is one today… unless it’s Carpe Diem; Literally “Pluck the Day” or more commonly “Seize the Day.” Usually when I hear that phrase I feel guilty, like I should be doing more with my time. However, the older I get the more I realize that I’m doing all I can. So no more guilt! Jesus plucked a nap here and there and I figure I should probably follow His lead. In fact, I may just throw down on a little Carpe Diem after lunch today. That way I’ll be ready the next time the kids come over. Besides, one should always strive to be more like Jesus.