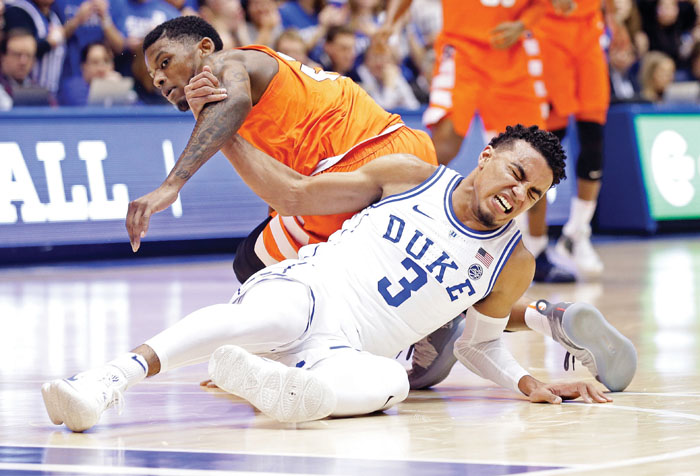 Duke's Tre Jones (3) tangles with Syracuse's Frank Howard during the first half of an NCAA college basketball game in Durham, N.C., Monday, Jan. 14, 2019. Jones was injured on the play and left the court. No. 1-for-now Duke will have to figure out how to play without perhaps its most irreplaceable player now that point guard Tre Jones is out indefinitely with a shoulder injury. (AP Photo/Gerry Broome)

By JOEDY McCREARY, AP Sports Writer
DURHAM (AP) — Top-ranked Duke hopes its team defense doesn’t slip without point guard Tre Jones — for however long he’s out.
The Blue Devils were just getting back to playing the kind of tough man-to-man defense that had been their trademark after several years of struggles. Now they’re hoping they’ll be good enough on that end of the floor when they host defensive-minded Virginia on Saturday.
Jones injured his right shoulder in a loss earlier this week to Syracuse, and while coach Mike Krzyzewski told The Athletic that it doesn’t appear to be a long-term injury, team spokesman Mike DeGeorge said Friday that Jones remains out indefinitely.
His likely absence might be magnified because the Blue Devils (14-2, 3-1) are going up against the Atlantic Coast Conference’s model of defensive efficiency — the fourth-ranked Cavaliers (16-0, 4-0), who now have a productive offense to match.
“We just have confidence in everyone that they can step up and lock in on that end,” Duke co-captain Jack White said. “The good news about our team, everyone loves to play defense. Everyone takes pride in locking up and they know the effect it can have on our team.”
While most of the attention on this Duke team has gone to possible top-five NBA draft picks Zion Williamson, RJ Barrett and Cameron Reddish for their performance on offense, a major part of Duke’s success has been Jones’ play at the other end of the floor.
His pressure on the opponent’s primary ball handler has been critical in making Duke difficult to score against.
Jones has had five three-steal games, including four in the 5½ minutes before he was hurt against Syracuse. He was so relentless against Texas Tech that coach Chris Beard instructed his players to pass to a teammate instead of bringing the ball up against Jones, who had six steals in that game.
“Tre, obviously … he’s an incredibly hard guy to replace,” Duke co-captain Javin DeLaurier said. “But when we talk (on defense), we’re so athletic and long, we fully have the capability to remain an elite defense, although we will miss his services greatly.”
Jones was hurt when he collided with Syracuse’s Frank Howard while picking up his fourth steal. The school said Jones suffered an AC joint separation — in that kind of injury, the collar bone separates from the shoulder blade — and had no timetable for his return, though Krzyzewski said he’d be “out for a while.”
In the roughly 40 minutes after Jones’ injury, Syracuse outscored Duke by 12 points and shot 45 percent. The Orange’s 95 points was a season high allowed by the Blue Devils, who dropped a full spot to No. 4 in Ken Pomeroy’s defensive efficiency rankings.
They certainly hope they don’t further regress while he’s out.
It’s fair to say Duke’s defense had slipped in recent years. Even Duke’s last national title team — led by Tre’s older brother Tyus — was occasionally leaky before it found solid footing in the 2015 NCAA Tournament.
The Brandon Ingram-led team in 2015-16 finished the season ranked 86th in defensive efficiency, and Jayson Tatum’s group a year later was 47th. Last year’s team with Marvin Bagley III and Wendell Carter Jr. appeared on a similar trajectory before a midseason switch to a 2-3 zone helped them wind up ninth and reach the Elite Eight.
Now comes a test from a Virginia team that ranks fourth in offensive efficiency and has scored 97 or more points twice this season — after scoring in the 90s only twice in its previous nine seasons under coach Tony Bennett.
There’s been no such fluctuation for Virginia’s defense, which is ranked second in defensive efficiency this season after finishing each of the previous five years in the top 10. The Cavaliers came into Cameron Indoor Stadium a year ago and held the nation’s top offense nearly 30 points below its scoring average in a 65-63 victory that put them in control of the ACC. Now they’re preparing for a Duke team playing its first full game without its starting point guard.
“We’ve played well, we’ve shot it well and … defended pretty solid,” Bennett said. “And your reward for that is, you get to go to Duke next. That’s the reward. … The league will test you, but obviously, I like how we’ve stood so far.”
Defense figures to again be at a premium in this matchup — which means the Blue Devils have to find a way to replace Jones’ pressure, whether that’s with backup Jordan Goldwire or with Barrett sliding over to fill his on-the-ball role.
“It’s going to be a fight on both ends of the floor,” White said.
___
More AP college basketball: https://apnews.com/Collegebasketball and https://twitter.com/AP_Top25

Eagles’ player who dropped pass thanks 2nd-grader for letter