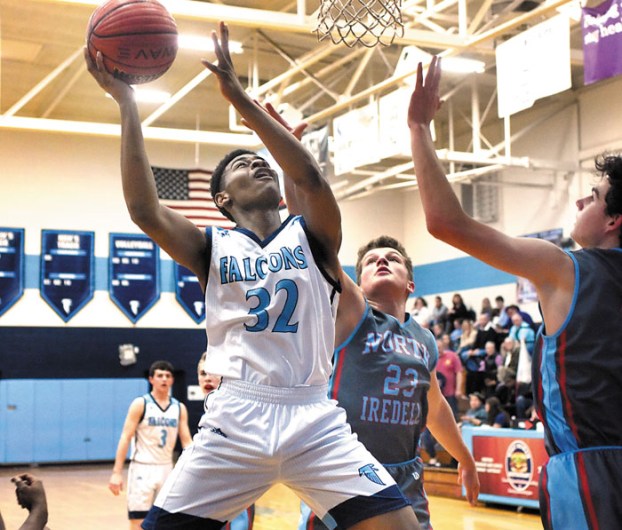 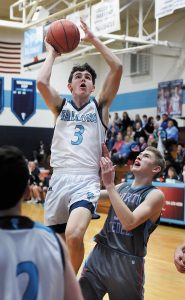 West Rowan’s Payne Stolsworth (3) led the Falcons with 20 points against North Iredell. … Photo by Wayne Hinshaw/ for the Salisbury Post

The Falcons have descended into last place in the North Piedmont Conference following Friday’s 66-54 loss to visiting North Iredell.

“They outplayed us. They scored more points than we did,” said longtime West coach Mike Gurley. “They executed in the fourth quarter and the Falcons didn’t. We scored seven points, they scored 21.”

Gurley wasn’t in the mood for socializing after West (2-14, 0-3) went went nearly six minutes without scoring and was outscored 17-0 during a decisive, fourth-quarter stretch. It wiped out the enthusiasm that cradled his team after Payne Stolsworth’s 3-pointer from the right side gave the Falcons a 52-47 lead with 6:43 remaining.

“Once we got up five, we seemed to calm down,” reasoned Stolsworth, who topped all scorers with 20 points. “That’s when they started scoring. Once we had them, we couldn’t get stops.”

“We know Gurley’s plans and how he thinks,” said Saunders, who replaced Brian Cantrell on the Raiders’ bench. “Defense was the key. We knew if we went all-out on defense, that would create turnovers and create our offense. It finally showed in the fourth quarter.”

West, now winless in six home games, used a 7-1 run to take a 47-45 lead after three periods — tying the score on a Bryson Moss layup and pulling ahead when Stolsworth turned a mid-court steal into a power layup drive in the late seconds.

“Stolsworth really kept us in the game for a long time with his scoring ability,” said Gurley. “If it hadn’t been for him, we wouldn’t have had that lead. But we just had too many defensive breakdowns to win. They executed and we didn’t.”

North Iredell (4-11, 1-2) snapped a three-game losing streak and won its first road game after six setbacks. A 19-2 finishing kick — and a West cold spell that kept the Falcons off the scoreboard for 5:38 — secured the outcome.

“I liked the excitement in here when we it was close in the fourth quarter,” Stolsworth said. “We were making stops and scoring the ball. We just couldn’t finish it. It hurts, because this is one we should have won.”

Teammate Jay Joseph contributed 15 points and Moss, a North Rowan transfer, scored 13. For North, junior guard Jake Tuggle netted 14 of his team-best 19 points in the first half and scored on a runaway layup that gave the guests a 62-52 lead with 1:47 to play.

“They’ve had our number for three years or so,” said Saunders, North’s fourth-year jayvee coach. “We just had to stop No. 3 (Stolsworth), who is a great shooter, and keep crashing the boards. We kept preaching focus and patience — and it paid off.”