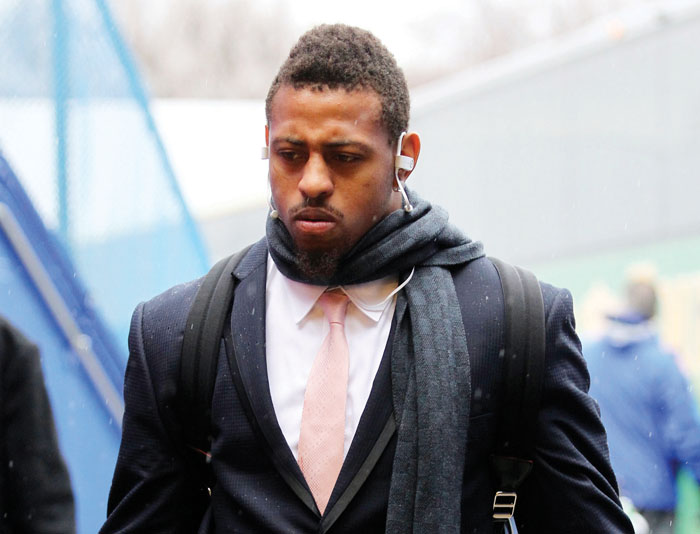 FILE - In this Sunday, Dec. 27, 2015, file photo, Dallas Cowboys defensive end Greg Hardy arrives prior to an NFL football game against the Buffalo Bills, in Orchard Park, N.Y. Former NFL defensive end Greg Hardy says he is “haunted” by his high-profile domestic violence past and wants to prove he has changed as he makes his debut in UFC, a promotion that hasn’t hesitated to embrace fighters with legal or drug problems. (AP Photo/Bill Wippert, File)

NEW YORK (AP) — Greg Hardy’s eyes popped as he saw his name in bold print on the oversized placard that identified him as a UFC fighter.

“That’s dope! It’s got my Twitter thing on it,” Hardy said with a laugh.

Yes, his Twitter handle @greghardyjr was printed underneath his name to let fans know how to find the hulking heavyweight on social media. UFC enthusiasts and social media pundits had already pounced on the disgraced former NFL defensive end:

— “why is this woman beater in the UFC?”

— “which woman fighter is he gonna beat up?”

Keep scrolling and scrolling and the majority of the 240-character sentiments strike similar opinions: Hardy doesn’t deserve a chance to fight for UFC.

Hardy understands those who want to wash their hands of someone arrested for assaulting a woman. While still playing football, Hardy was convicted in July 2014 of assaulting and threatening a woman who contended the 6-foot-4, 275-pounder threw her in a bathtub and onto a sofa covered with guns before threatening to kill her. He appealed, and prosecutors in North Carolina eventually dismissed domestic violence charges in February 2015, saying the accuser in the case couldn’t be found. The court heard the woman had reached a civil settlement with Hardy.

“I do revisit the past at night,” Hardy said Thursday. “I’m haunted and I am a broken man. But at the end of the day, I’ve got to build myself back up.”

Hardy wants to show he has changed as he makes his debut in UFC, a promotion that hasn’t hesitated to embrace fighters with legal or drug problems. His co-headline spot in a heavyweight bout Saturday night comes at a key moment for the MMA giant, its first show in its $1.5 billion contract with ESPN.

Hardy played 12 football games in 2015 under a $13.1 million deal with the Cowboys before turning to professional fighting, where his rise has been rapid. The 30-year-old breezed through six fights — none lasting past the first round — and won a contract through a UFC reality show.

His debut comes one month after UFC allowed Jon Jones to compete following a positive drug test, moving an entire fight from Las Vegas to Los Angeles because Nevada regulators wouldn’t license the troubled superstar. It’s also several months after Dana White, UFC’s president, condemned Conor McGregor for his criminal act of throwing a wheeled cart at a bus full of fighters, then turned around and used the video footage to hype up an October megafight between McGregor and Khabib Nurmagomedov, a bout that itself ended in a melee.

Scrutiny of Hardy’s ascent grew among fans when he was placed on the same card as flyweight Rachael Ostovich, who is fighting Paige VanZant. Honolulu police arrested Ostovich’s husband, Arnold Berdon, who pleaded not guilty to attempted murder and is accused of punching his wife in the head, face and ribs, fracturing her eye socket.

White has defended having the two intertwined fighters on the same card and said he had Ostovich’s approval to book Hardy.

“From the minute I called her, there was never a situation,” White said. “She didn’t know who Hardy was. She didn’t know anything about it. She said, ‘His situation isn’t my situation. They’re completely different. I don’t even know the guy and I’ll have no problem with any of this.’”

Ostovich said in New York that she talked to Hardy this week to “squash whatever might be happening.”

“Let’s work together and use this to help other people from both sides,” she said. “It wasn’t bothering me. It was just something that was on my mind and on my heart that I wanted to go in and meet with him.”

Ostovich was pulled from her fight against VanZant because of the severity of the injuries suffered in her attack, only to insist she could compete as she saw other fighters clamor for the marquee spot.

She had earned her spot in Brooklyn and, once medically cleared — she wanted to clear the slate with Hardy.

“I felt like that was the right thing for me to do,” he said. “I totally get it. I understand why people would have a hard time grasping the whole situation and why things happen. But I believe everything happens for a reason. I believe we can change our surroundings for a positive thing.”

Hardy has had few positives since he had 15 sacks for the Carolina Panthers in 2013 when he was picked for the Pro Bowl. He was arrested on a cocaine possession charge in a Dallas suburb in 2016.

“I’ve grown in every way possible and the people around me have helped me do that,” Hardy said. “Everything’s changed as far as the sport, the venues and myself. Please keep watching and find out for yourself.”

Hardy hopped down the stage after the ceremonial staredown against Allen Crowder and gave White a big bro hug.

But not all observers backed UFC’s decision to sign Hardy.

“It’s quite offensive. It’s gross,” said Kiersten Stewart, director of public policy at Futures Without Violence, a national group that works to prevent domestic and sexual violence and child abuse. “It’s about making money off domestic violence. It really minimizes the harm that domestic violence does.”

Stewart said Ostovich had every right to fight at Barclays Center with Hardy, but raised the question: “Why was she put in this position?”

White said it was a moot point.

“These are two UFC fighters and eventually they would have ended up on the same card anyway,” White said. “It could be this fight or it could be 10 fights from now.”

Win or lose, Ostovich knows she’ll end her combat in the cage in tears. She’s been publicly stoic in the face of probing questions about her abuse and Hardy’s presence and is ready to let her emotions out once the bell rings. Through all the adversity, there was nowhere else she wanted to be but New York.

“If I was pulled from the card because of my situation and being at home just recovering and thinking about it, I would have been at home Saturday night watching my fight and just be so crushed,” she said. “It feels so much better to be here than not.”

Hardy feels similarly about a new lease on life as an athlete. He was cheery — downright happy-go-lucky — and did not shy away from answering questions about his past, even as he was light on specifics.

And he’s already made a great impression on the new boss.

“The guy is gifted. He’s a great athlete. He looks good so far,” White said. “When he hits people, they go down.”