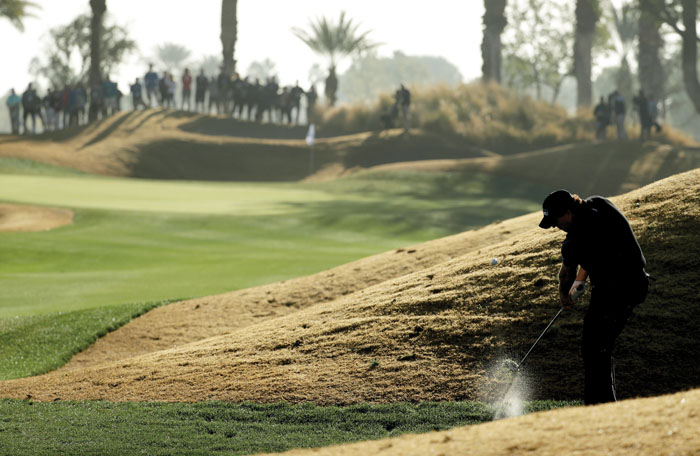 Phil Mickelson hits from rough on the 10th hole during the second round of the Desert Classic golf tournament on the Nicklaus Tournament Course at PGA West on Friday, Jan. 18, 2019, in La Quinta, Calif. (AP Photo/Chris Carlson)

LA QUINTA, Calif. (AP) — Phil Mickelson birdied four of his last five holes Friday in the Desert Classic to take a two-stroke lead into the weekend in his first event of the year.
A day after matching his career-low score with 12-under 60 at La Quinta Country Club, the 48-year-old Mickelson had a 68 on PGA West’s Nicklaus Tournament Course to reach 16 under.
“I struck the ball every bit as well, I just didn’t putt anywhere close to as well as I did yesterday,” said Mickelson, the tournament winner in 2002 and 2004.
Lefty will play the final two rounds on PGA West’s Stadium Course.
“I’m starting to drive the ball a lot longer and straighter than I have in a while and so that sets up nicely for that course,” Mickelson said. “I feel like I can play aggressively with the way I’m hitting it off the tee.”
Curtis Luck was second after a 66 on the Nicklaus layout. The 22-year-old Australian rebounded from a bogey on the par-3 eighth with a closing birdie on the par-4 ninth.
“Just like yesterday, very solid, lot of greens, a lot of fairways,” said Luck, the 2016 U.S. Amateur champion. “Just missed a couple of short ones today, unfortunately. But putting’s been great.”
Adam Hadwin and Steve Marino were 13 under, and defending champion Jon Rahm was another stroke back with Wyndham Clark and Joey Garber.
Mickelson birdied the par-4 fifth and sixth holes, the par-5 seventh and closed with another on No. 9 . On his opening nine, he birdied the par-5 11th and par-3 12th , then gave back the strokes with a double bogey after hitting into the water on the par-4 18th.
“It really wasn’t as hard a shot as I made it look,” Mickelson said about his approach on 18. “I had a decent lie after dropping off the cart path, but I had the ball a little bit below my feet and a slight uphill lie, which the tendency on those shots is to pull it and I just didn’t adjust for that very well and I pulled it right in the water.”
Mickelson is making his first tour start since early October and first competitive appearance since beating Tiger Woods in Las Vegas in November in a one-day, made-for-TV event. He won the World Golf Championships-Mexico Championship last year for his 43rd PGA Tour title and first since the 2013 British Open.
“There’s two areas that guys tend to decline when they hit about mid 40s or so forth,” Mickelson said. “One is speed and one is putting. The last two years I’ve done a good job of improving my putting. I’ve actually putted better the last few years than I ever have in my career. The last thing is speed, because if I have speed with the driver then I can worry more about accuracy.”
Hadwin had a 66 at La Quinta, the course where the Canadian shot 59 two years ago.
“I’m playing some extremely good golf again here in the desert and just got to keep moving forward,” Hadwin said.
Marino had a hole-in-one on the seventh hole at La Quinta in a 65.
“There was like probably 15 people behind the green, but it was weird, they didn’t really go bananas,” Marino said. “So we thought it was in, but it wasn’t like a hundred percent sure and luckily we went up there and it was in the hole.”
Rahm had a 66 on the Nicklaus Course. He also will play the final two days on the Stadium Course.
“It’s still a very, very difficult golf course and you have to hit it good,” Rahm said. “Hopefully, I just keep the mojo that I had last year going.”
Clark shot 67 on the Nicklaus layout, and Garber had a 64 at La Quinta.
Top-ranked Justin Rose was tied for 28th at 8 under after a 68 on the Nicklaus layout. He’s the first No. 1 player to play the tournament since the world ranking began in 1986.

Without Jones, No. 1 Duke braces for visit from…