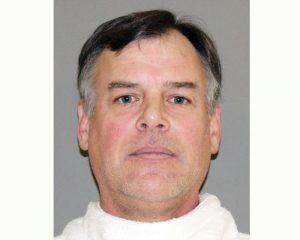 This booking photo provided by the Denton County Jail shows John Wetteland. The former major league pitcher was arrested, Monday, Jan. 14, 2019, in Texas and charged with continuous sex abuse of a child under age 14. Denton County jail records show Wetteland was arrested and freed on $25,000 bond. No attorney was immediately listed to speak for the 52-year-old Wetteland, who lives in Trophy Club, 25 miles northwest of Dallas. (Denton County Jail via AP)

DENTON, Texas (AP) — John Wetteland, a former All-Star and World Series MVP, has been charged in Texas with continuous sex abuse of a child under age 14.
Wetteland, 52, was arrested Monday and freed on $25,000 bond, according to Denton County jail records. Wetteland lives in the Dallas-area suburb of Trophy Club.
Bartonville Police Chief Bobby Dowell said the Texas Department of Family and Protective Services contacted his office last week. After an investigation, an arrest warrant was issued for Wetteland, who was taken into custody by Denton County sheriff’s deputies.
Dowell said that because of the nature of the offense and the stage of the investigation, he had no further details to release. DFPS spokeswoman Marissa Gonzales said details of the agency’s cases are confidential.
According to a consolidated complaint and probable cause affidavit, Wetteland is accused of having a child perform a sex act on him, beginning in 2004 when the child was 4. The accuser said it happened twice more during a two-year period.
The Associated Press was not able to contact Wetteland or his attorney for comment.
Wetteland was the Most Valuable Player of the 1996 World Series when he helped the New York Yankees beat the Atlanta Braves. He posted four saves in that Series, which remains a major league record.
He’s also been inducted into the Texas Rangers’ Hall of Fame.
Wetteland, a three-time All-Star, ranks 15th on the all-time list with 330 saves. He had a 48-45 record with a 2.93 ERA in a 12-season career also included stints with the Los Angeles Dodgers and Montreal Expos.
In 2006, he was hired as the Washington Nationals’ bullpen coach but was fired halfway through the season after then-manager Frank Robinson said he’d asked Wetteland several times to get the team’s relievers to focus more and reduce their practical jokes.
In 2009, while Wetteland was on the Seattle Mariners’ coaching staff, authorities responded to a 911 call from his home in Texas. Media outlets reported that Denton County authorities described the call as a mental health issue, saying Wetteland was contemplating suicide. Wetteland said in a statement at the time that “the circumstances leading to my elevated blood pressure and heart rate have been addressed.”
The Texas Rangers said in a statement that they “have been made aware of this situation and have no further comment.” Wetteland has no current role with the organization.