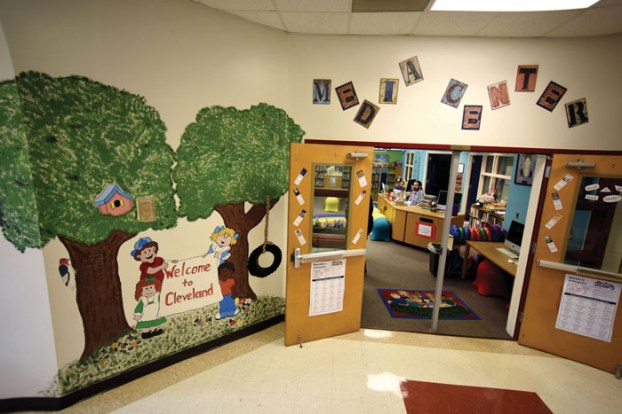 CLEVELAND — Students no longer walk through the halls of the closed Cleveland Elementary School, but the opening of a new school next door won’t spell the end for parts of the shuttered building.

Rowan Public Library plans to open a West Rowan branch in Cleveland Elementary’s media center and auditorium. And, while a date for its opening remains unclear, construction isn’t far off. Library Director Jeff Hall says county government can solicit construction bids as soon as it receives a deed to the property from Rowan-Salisbury Schools.

“It’s going to be a great reuse of the facility,” Hall said.

The media center’s appearance won’t drastically change, as it will shift from being an elementary school library to a public library. Hall said plans include placing six computers for adults and two for children in the new library. Wireless internet will be available, too, Hall said.

He said the Rowan Public Library foundation will provide a total of $40,000 to pay for library materials.

Construction costs will be split between county government and a pot of money raised by library groups, the town of Cleveland and community members. Hall said the town has committed $100,000 to the library project, the library foundation has committed $200,000, the group Friends of Rowan Public Library donated $15,000 and a small fundraising campaign generated an additional $12,000.

The combined fundraising for the West Rowan public library has generated $327,000 of the $670,000 estimated cost.

Commissioners Vice Chairman Jim Greene, a Cleveland resident, says old schools are often not torn down, but the reuse of Cleveland Elementary School’s media center will be good for the area.

The largest portion of the estimated cost will be for renovating the school’s auditorium. Once renovated, it will have two small meeting rooms, a kitchenette and a larger room with a stage that will fit roughly 200 people. As examples of uses for the renovated auditorium, Hall mentioned family reunions, recitals and social clubs.

The auditorium will be made available to the public even when the library is not open, Hall said. It would be unlike any of the library’s other locations, he said.

Renovations to the media center, built in the 1990s, will be minimal by comparison, he said.

With new carpet and a fresh coat of paint, the library staff could begin moving into the media center tomorrow, he said.

He said some parts of Cleveland Elementary School will be demolished, including its gymnasium. But crews are expected to place tires, tarps and protective items around buildings the library and county government hope to save for reuse.

Accompanying the gym’s demolition, Hall said, the West Rowan public library will build a parking lot and erect screening to separate the library from the new West Rowan Elementary.

“When we build the library, we’re going to have to fence it and screen it for the school,” Hall said. “You don’t want the general public on the school campus.”

The library isn’t the only reuse planned for the vacant elementary school.

The county commissioners have asked local architect Pete Bogle to evaluate whether it’s possible to reuse the southernmost building on the campus as an EMS station.

The current EMS station is on property owned by Cleveland Community Volunteer Fire Department, and County Manager Aaron Church said there’s a “general understanding that particular station is going to leave the premises.”

If plans come to fruition — a new library, EMS station and a fire station all within a short distance of West Rowan Elementary — Hall said the area “would be a nice campus for the county.”