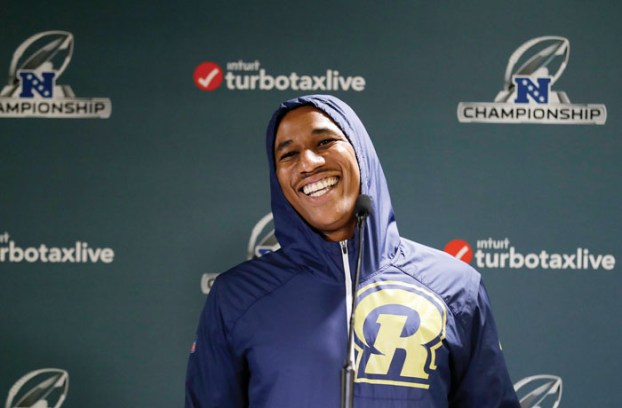 THOUSAND OAKS, Calif. (AP) — Marcus Peters stood at a podium Wednesday and spoke about his respect for Sean Payton and the New Orleans Saints. He insisted his feisty comments about the coach two months ago had been misinterpreted and blown out of proportion by controversy-hungry fans and media.

And then his coach popped up in the back of the room.

“Let me get some of that soup!” Sean McVay yelled.

One way or another, gumbo will be served at the NFC championship game.

As the Saints and the Los Angeles Rams began their preparation for Sunday’s showdown, Peters and Payton downplayed the importance of what occurred during and after the teams’ first meeting at the Superdome this season. The cornerback and the coach expressed a warm mutual regard and no hard feelings from November.

“We’re trying to play a game,” Peters said Wednesday. “We ain’t trying to talk about no gumbo. We can talk about all that stuff afterward.”

Still, here’s the backstory on the Creole kerfuffle, for those with an appetite:

New Orleans beat the Rams 45-35, with Drew Brees shredding Los Angeles’ secondary for 346 yards and four TDs while handing the Rams their first loss of the season. In particular, receiver Michael Thomas appeared to dominate his matchup with Peters, who acknowledges he had a poor game.

Afterward, Payton acknowledged the Saints had targeted Peters because they liked the matchup with Thomas — a bold statement to make about a former Pro Bowl cornerback. That drew the attention of Peters, who responded sharply back home in the Rams’ locker room.

Peters is a personable athlete and an aggressive competitor. He is also an interesting character who isn’t afraid to let people know it — and that’s something of a rarity in the frequently buttoned-up, corporate world of professional football.

Peters says his comments weren’t meant “to be disrespectful or anything like that. I was (ticked) off. I didn’t have the game that I wanted to have.”

Before McVay made light of the situation with his shout, he put it in perspective.

“I think it was all in good fun,” McVay said. “I think there’s a competitiveness that exists. There’s a lot of dialogue that goes back and forth when you have relationships or you have history with people. I think Marcus was having fun with it, and I know that he has a whole lot of respect for Coach Payton and the Saints.”

Payton also was asked about the interplay repeatedly Wednesday, but the veteran coach only repeated his respect for the Rams and their volatile cornerback.

“I’m a huge Marcus Peters fan,” Payton said. “A lot of it was friendly banter, but he’s a tremendous player, a real talented player with dangerous ball skills. He’s someone that you have to know where he’s at all times.”

Peters repeatedly refused to indulge in trash talk or any additions to a budding rivalry Wednesday, and he explained exactly why.

“I see y’all trying to make it to be something that it’s not,” Peters told reporters. “All respect to Sean Payton and what he does. Like you say, before, during the game, things happen, but I just love the fact that he’s a competitor.”

In fact, Peters and Payton might be kindred spirits of a sort.

Payton is well known as an enthusiastic presence on the sideline, where he screams at players on both teams, berates the officials and sometimes even gestures at the opposing coaches. Over the years, he has made a choke sign at Devonta Freeman, mocked the Minnesota Vikings fans’ signature clap and had animated postgame interactions with fellow coaches including Dirk Koetter, who got slapped on the chest rather aggressively.

The gumbo date might not happen, but what occurred in the teams’ first meeting should have reverberations into the playoff rematch, where fellow star cornerback Aqib Talib will be back alongside Peters after missing the first meeting with an injury.

Saints cornerback Marshon Lattimore thinks Peters should be much more concerned about Thomas than Payton — and Peters undoubtedly agrees.