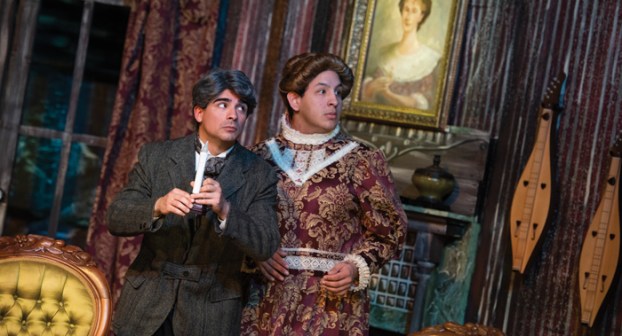 The Mystery of Irma Vep, A Penny Dreadful is opening at Lee Street Theatre tonight

Review: A laugh a minute at ‘The Mystery of Irma Vep’

Oh, the unspeakable horror! The terrifying monsters! The evil that will have you laughing for two hours as you watch the comedy “The Mystery of Irma Vep” at Lee St. theatre.

Starring two hilarious actors, Jacob Brayton and Matt Carlson, in numerous roles, the play is a send-up of the good old horror movies featuring Dracula and the Wolf-Man, with a little Frankenstein thrown in for good measure.

Playwright Charles Ludlum has fun with all the cliches of horror and the silliness of two men in multiple roles, many of which are women.

Brayton and Carlson have incredible energy in the play and must be totally exhausted by the end. The costume changes alone are enough to make an actor weep.

But they know how to milk it for laughs, with poses, facial expressions and little flourishes that exaggerate their characters to the high level of farce.

Plot? Well, it’s serpentine, to say the least. It’s like trying to find an unopened tomb in the Valley of the Kings. Wait, it’s just like that because that’s part of the story, too.

OK, where to start? Lord Edgar Hillcrest lives in a manor on the Scottish moors, Mandacrest, with his second wife, a housekeeper and a dull farm hand. And assorted monsters and ghosts, not limited to his late first wife.

Lady Enid, the second wife, is a former actress who knows how to ham up a scene. One of the funniest bits in the play is Carlson, as Lady Enid, and Brayton, as Lord Edgar, simply speaking each other’s names over and over as they do a flirtatious dance of sorts. “Enid.” “Edgar.” “EEEnid.” “EDDDgarr.” Etc.

Carlson plays the dull farm hand, Nicodemus, with a shock of black hair and a wooden leg, as a dullard who happens to quote Shakespeare. He’s in love with Jane, the housekeeper, played by Brayton. Jane is a crafty minx, feeding the terrors of Lady Enid, rebuffing Nicodemus and longing for Lord Edgar.

In fact, there’s a lot of lines from Shakespeare in the play, and a little Edgar Allan Poe thrown in, too. You might have to see the performance twice just to catch all the references.

As the two actors whirl in and out of costume backstage, donning wigs, dresses, fake bosoms and monster gear, it’s a wonder no one comes out wrong on stage. Another funny bit involves Jane winking and gesturing to Lady Enid why Nicodemus can’t come speak to her.

There are so many funny moments, from the lines to the physical comedy to the droll references, that you will be laughing almost the whole time. The sponsor’s night audience was laughing, groaning, clapping, having almost as much fun as the actors.

Craig Kolkebeck, Lee Street’s artistic director, directed this comedy, which is not something he usually does. He’s more interested in plays with serious themes, but he brings out the best with these two. Kate Mishler, guest scenic artist, and Rod Oden, production designer, have created a campy but atmospheric set, full of surprises.

The lighting, too, creates a certain feeling, as does the occasional mist from the moors. Be sure to check out Mark Stephenson’s work on the portraits of the ladies of Mandacrest.

It’s a thoroughly enjoyable evening. Make sure to take your seat early so you can see the previews of horror movies from the ’30s, ’40s and ’50s. That will get you in the proper mood. If you stay in the theater during intermission, you can also enjoy some classic 1980s music, including “King Tut.” Lord Edgar is, after all, an Egyptologist.