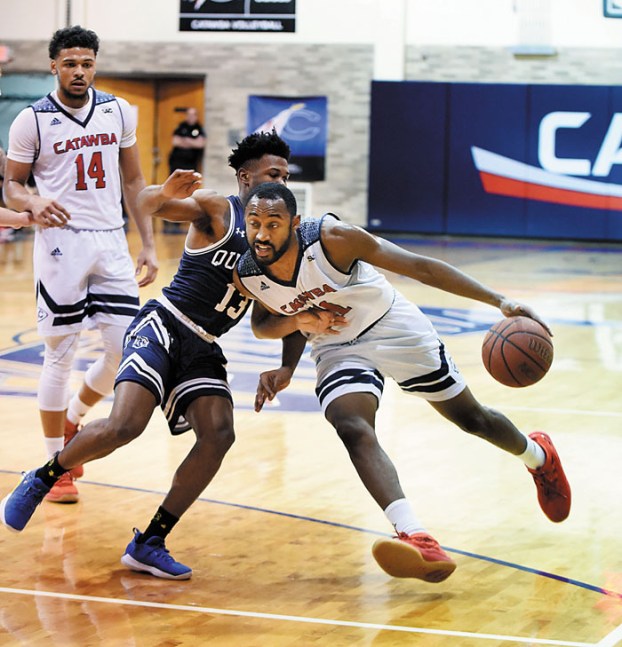 Tough loss after a bitter battle for the Indians 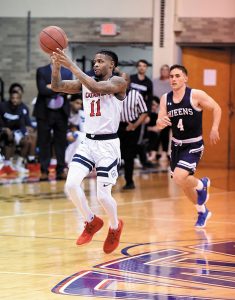 Wayne HInshaw/for the Salisbury Post …
Guard Marcell Haskett leads a Catawba fast break and looks to pass to a teammate.

The Indians coughed up a 10-point second-half lead to 10th-ranked Queens — then misfired on two layup tries in the waning seconds — and suffered an 87-86 loss at Goodman Gym.

Catawba (13-3, 5-2 SAC) did everything but prevail. It shot 46.3 percent from the field and made 13 3-pointers. It narrowly out-rebounded conference-leading Queens (16-2, 8-0), winner of 11 straight games, and held a two-point lead until freshmen Kenny Dye buried a 3-ball from the right side with 12.4 seconds remaining.

“They’ve got grown men,” winning coach Bart Lundy said. “This was as tough a game as we’ve played all year. We feel fortunate to come out with the win — and we better leave before they change their mind.”

Even as the final seconds ticked off the clock, the drama was intense. Catawba’s Jameel Taylor was called for an offensive foul for charging into Van Turner with 3.2 seconds to play. “It was one of those bang-bang plays,” Taylor said. “Just had to move on and keep playing.”

When Queens junior Josh Brodowicz threw away the ensuing inbounds pass, Catawba still had life and 2.3 seconds to make a play. But it’s last two shots — contested, doorstep layups by Ben Zemonek  and Taylor — failed to connect, giving the Royals a reason to celebrate.

“It hurts,” Taylor said after shooting 7-for-15 from the field and netting 19 points. “But it’s a lesson learned. We had opportunities.”

They did. Catawba went 8-for-16 from beyond the three-point line in the first half and descended to its locker room with a 43-36 lead. Disappointed junior Marcell Haskett drained four long balls and and finished 7-for-9 from beyond the arc for a team-best 21 points.

“We fought hard but we made mistakes,” Haskett said. “Everyone in a Catawba uniform feels we can compete with anyone. Our last game (Saturday’s win against Lincoln Memorial) was a statement game. This one, well….a loss is a loss. We don’t feel good about losing.”

Catawba quickly lost its momentum as the second half began — and lost its lead when 6-foot-4 forward Shaun Willett scored on a one-handed hook shot with 16:16 to play.

“We just had to play tough, play through some calls,” Willett said, after contributing 22 points and 10 rebounds — cataloging his nation-leading 15th double-double of the season. “Being down, we practice being in situations like that. We weren’t in any trouble that we hadn’t been in before.”

Perhaps, but four minutes later Catawba capped a 15-5 spurt and took a 60-50 lead when Haskett’s fadeaway haymaker from the left corner caught nothing-but-net.

“Marcell is a one-man run sometimes,” Perron said. “He can get it going and the rest of them do a fine job finding him in space.”

Queens turned around and stormed ahead, 68-66, when Daniel Carr (21 points, 4 assists) hit a 3-ball with 7:42 remaining. The score was tied six times down the stretch, the last when Catawba’s Devin Cooper swished a clutch 3-pointer that made it 84-84 with 1:17 on the clock. Taylor’s drive for two gave the Indians their final lead with half-a-minute to go and set the stage for Dye’s pivotal, game-winning basket.

“Coach drew that play up,” said Willett. “He called it ‘Trips on the Fence.’ It’s a go-to play, one that every coach has in his back pocket.”

Lundy said he wasn’t familiar with Trips on a Fence.

“Don’t know anything about that,” he explained. “But it was right out of a timeout. I put the ball in my best driver’s hands (Carr) and he made a great decision to kick it back to Kenny. Dye made a tough, contested shot, but there was still a lot of time. That was a long 12.4 seconds.”

It was certainly dramatic, but when it ended — and Catawba’s five-game winning streak was history — Perron found the good side of bad.

“I don’t think we’re walking away angry,” he said. “We don’t fear anybody. These guys know we can beat anybody that we play.”

NOTES: Willett is the SAC reigning Player of the Week. He shot 8-for-17 from the floor and scored 20 second-half points. … Queens shot 50 percent from the floor and was 17-for-31 in the second half. … Besides Haskett and Taylor, Catawba’s Cooper (13 points, 4 assists) and Jordan McElveen (12 points, 9 rebounds) also cracked double figures. … Catawba is 12-2 in last 14 games and visits Anderson on Saturday afternoon.