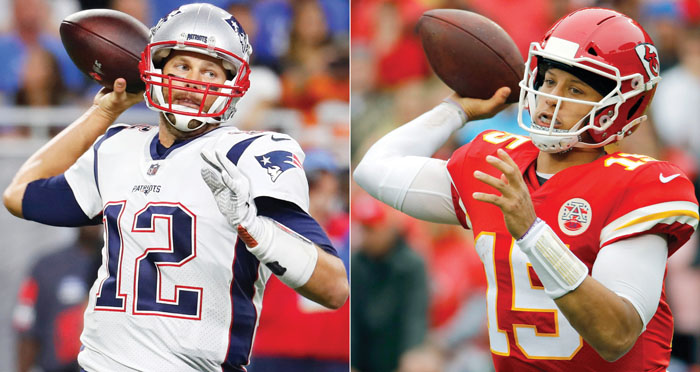 KANSAS CITY, Mo. (AP) — One of them is a sixth-round pick who married a supermodel, became one of the greatest quarterbacks in NFL history and is still going strong well past his 41st birthday.

The other is a first-round pick who is still dating his high school sweetheart, has exactly one season as an NFL starter on his resume and just turned 23 earlier this season.

Indeed, few similarities exist when it comes to Patriots quarterback Tom Brady and Chiefs counterpart Patrick Mahomes, whose teams will meet for the AFC title at Arrowhead Stadium on Sunday.

Brady is the suave star with the polished skillset and more postseason experience than any QB in history, while Mahomes is the sling-it-anywhere standout who just one day may take over the mantle as best in the game.

Both get the job done, even if they do it in very different ways.

“I don’t know about comparisons,” Patriots coach Bill Belichick said. “Look, Mahomes is an outstanding player in every facet of the game. He’s got a strong arm. He can throw the ball the length of the field. He has great touch. He has the ability to read coverages and extend plays, make good decisions and make explosive plays without taking too much of a risk or putting his team in jeopardy.

“He does all of those things well,” Belichick said, “and that’s a credit to him.”

Brady has a strong arm, too, even if it’s not what it once was. He still has great touch and his ability to read coverages may be the best in the game, helping him lead the Patriots to their eighth consecutive AFC title game.

But that is just about where the similarities end.

Brady prefers to stand in the pocket and deliver the ball the same way a blackjack dealer stands behind his table and distributes cards. He moves around when he’s under pressure but rarely takes off running, and he’s as likely to chuck the ball into the third row on a broken play as take a risk downfield.

It’s an approach that has served him well. Brady’s never thrown more than 14 picks in a season.

He also has one of the fastest releases in the NFL, and Chiefs linebacker Justin Houston said Wednesday that getting Brady in third-and-long is perhaps the most crucial point in stopping him.

“Because if it’s third-and-short,” Houston said, “the ball’s coming out fast.”

More valuable than Brady’s physical ability, though, may be his mental acuity. He has an uncanny gift for dissecting a defense, finding the right matchup and exploiting it to the Patriots’ benefit.

“I haven’t seen any decline,” Chiefs coach Andy Reid said. “He sees things even better than when he was younger. I’m wearing glasses and he isn’t. The age hasn’t hit him. He’s just an amazing guy.”

Then again, so is the kid with the moppy Mohawk standing across from him Sunday.

Mahomes matched Brady’s best season by throwing 50 touchdown passes as the Chiefs’ first-year starter, and he eclipsed 5,000 yards though the air, something his counterpart has accomplished just once.

But perhaps most importantly, he led the Chiefs to a better record than the Patriots to secure home-field advantage, and that means Mahomes will have 80,000 fans behind him with a shot at the Super Bowl on the line.

He’s given them plenty of thrills already this season.

Unlike Brady, Mahomes thrives when everything collapses around him. He’ll throw caution to the wind and run for a first down — or a touchdown as he did last week against Indianapolis — but is just as dangerous in the passing game, where his knack for keeping his eyes downfield makes him a constant threat.

“The play is never dead. He can find new ways to get you the ball,” Chiefs tight end Travis Kelce said. “It may look like a screwball, a slider here or there, but it’ll get to you eventually.”

“I mean, on film you see him not even looking where he’s throwing,” Patriots linebacker Dont’a Hightower marveled, “and he’s able to hit it, too. He’s a very accurate quarterback.”

And his arm strength is the stuff of legends.

“His skillset alone is (unique),” Hightower said. “He’s not as crafty as Aaron Rodgers, but Aaron does a great job, as well, as far as extending plays and not looking to run, but looking to get guys uncovered or moving with their eyes. There’s not a lot of quarterbacks that have that in their skillset.”

There’s another skill that Brady and Mahomes share, and it’s one that might be rather unexpected given the vast difference in age and experience: leadership ability.

Brady has developed it through success. Mahomes has established it with his demeanor.

“We play against great players every week. They come in different shapes and sizes and different skillsets, but they’re all good in their own way. They all can create problems for us or the opponent, us in this case,” Belichick said. “Again, we’ll do the best we can this week to try to defend what we can defend.”