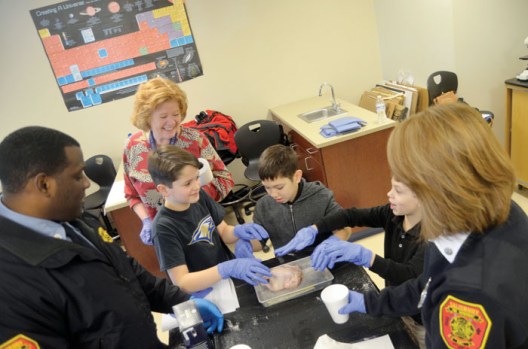 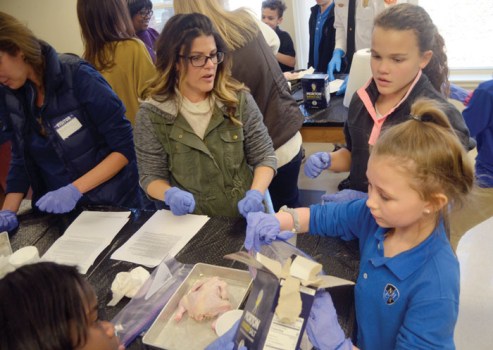 Parent volunteer Aimee Merrell, center, works with a group of girls in the North Hills Christian School Science Lab where students are learning about the effects of mummification. The students will use baking soda, salt and other ingredients to "mummify" a cornish hen. Shavonne Walker/Salisbury Post

SALISBURY — North Hills Christian School fifth-grader Renna Linn was elated to pull on rubber gloves for her science class’ latest project — learning about mummification as it was done in ancient Egypt.

The students got their gloved hands dirty as they poured household ingredients into a plastic bag to begin the process that would mummify a chicken.

Over the next six weeks, students will meet in the science lab with their parent volunteers and a few Salisbury firefighters, who’ve volunteered for the lesson for the past three years.

“I think it’s very, very fun. It’s educational, and we are learning about mummies,” Renna said.

Renna said she wasn’t aware there was an actual mummification process.

“I just thought they wrapped them in toilet paper,” she said with a laugh.

Renna’s friend Emily Teague said she is excited to see how the mummified chickens will turn out.

Teague said the project was “very disgustin,” but at the same time “pretty cool.”

The idea to mummify a chicken isn’t new, but it gets the students interested in science and hands-on learning, said instructor Leslie Pullen.

Pullen, who retired a few years ago from Rowan-Salisbury Schools, now teaches anatomy and biology at Rowan-Cabarrus Community College. She often helps with the science lab at North Hills.

Pullen said she hopes the ultimate outcome is that students “fall in love with science.”

In addition to getting hands-on experience, she said, they are learning to work together, how to properly measure, reading about Eygpt, following instructions and seeing a task to the end.

Students received cornish hens that were bought frozen and thawed. They washed, dried and rubbed the chickens down with rubbing alcohol. Then they added exact measurements of salt, baking soda and cinnamon. The chickens were placed in bags and sealed.

The chickens were taken home by the volunteer parents and returned the next week for more of the salt, baking soda and cinnamon mixture.

Susan Watkins said she didn’t hesitate when it came to volunteering in her child’s class. Watkins read her instructions carefully and learned about the process before attending the lab.

She said the students have been talking about the experiment since before the Christmas holiday.

Watkins said she recalls dissecting the customary frog and worm when she was in science class, but she was delighted at how the students could apply what they’ve learned about the circulatory and respiratory systems in their current project.

“They are not playing in the fifth grade,” she said of the caliber of the project. “It exposes them to things they don’t typically see. It adds a different dimension.”

Watkins and another parent volunteer, Aimee Merrell, both said they appreciate how the science class is tied to biblical discussions.

One such discussion was about the heart and how “Jesus is the heart of everything we do,” Merrell said.

Salisbury city Fire Marshal Terry Smith said the Fire Department began volunteering for the science experiment three years ago after some firefighters went to the school to read to students.

“It gets us involved with the children as mentors,” Smith said.

Smith said they look forward each year to getting in the classroom, following the project to the end and helping students accomplish their goals. This year, he was joined by firefighters Wesley Jackson and Kim Boling.