Harden has 58 points in Rockets’ OT loss to Nets 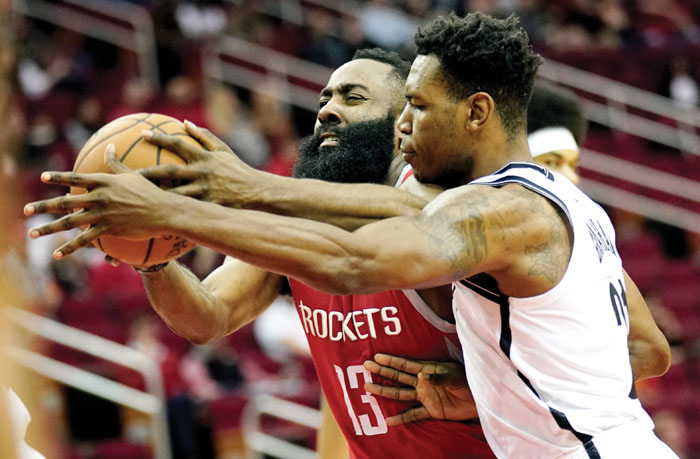 HOUSTON (AP) — Spencer Dinwiddie scored 25 of his 33 points in the fourth quarter and overtime and the Brooklyn Nets spoiled James Harden’s 58-point night with a 145-142 victory over the Houston Rockets on Wednesday.

Harden had his second straight season high after scoring 57 in a victory over Memphis on Monday night, but was only 5 of 19 from 3-point range. The Rockets shot an NBA-record 70 3s, making just 23.

Dinwiddie forced overtime, making three 3-pointers in the last 30 seconds of regulation. In the extra period, he hit the go-ahead basket with 28 seconds left.

Houston had a chance to tie it at the buzzer, but Gerald Green’s shot clanged off the rim. After Houston blew an 11-point lead, Harden’s 3-point attempt bounced off the rim to send it to overtime.

The Rockets broke their own record for 3-point attempts after shooting 61 against New Orleans on Dec. 16, 2016. Houston also holds the record for most 3-pointers made after hitting 26 in a win over Washington this season. Green, who did not attempt a 2-point basket, made 5 of 15.

BOSTON (AP) — Kyrie Irving hit a foul-line fadeaway to give Boston the lead, then made a 31-foot 3-pointer to finish with 27 points and lead the Celtics past Toronto.

Returning after missing the last game with a bruised right leg, Irving had 10 points and six of his career-high 18 assist in the fourth quarter — including passes to set up Boston’s last three baskets in a game-ending 17-4 run. Al Horford scored 24 points to help Boston rebound from three straight road losses.

Kawhi Leonard scored 33 points, and Serge Ibaka had 22 points and 10 rebounds for the Raptors.

Bertans finished with 12 points. Marco Belinelli led the Spurs with 17.

MEMPHIS, Tenn. (AP) — Giannis Antetokounmpo had 27 points and 11 rebounds and Milwaukee had a 19-0 third-quarter run to beat Memphis.

Eric Bledsoe added 16 points to help the Bucks to their third straight victory and 14th in 17 games. Omri Casspi led Memphis with 17 points. The Grizzlies have lost nine of 10 games.

The Pistons won for the third time in 11 games.

Nikola Vucevic and Terrence Ross each scored 24 points for Orlando.