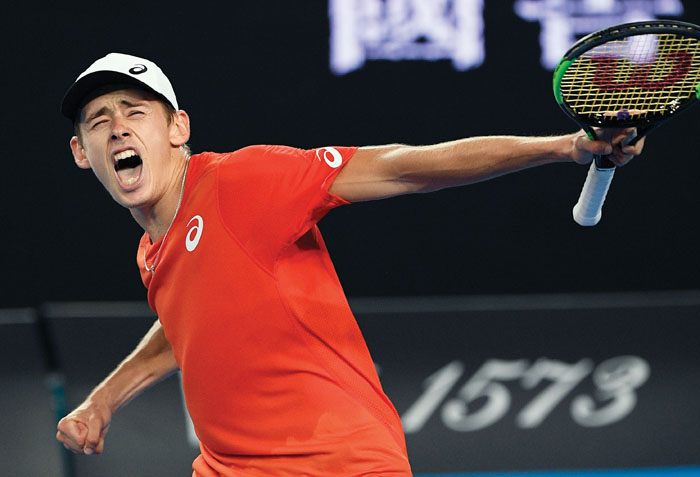 Compared with the genteel nature of past stars like Rod Laver and Ken Rosewall and more recently, the likes of Pat Rafter over-ruling line calls and giving points to his opponents long before video replays existed, Australian men’s tennis is filled with Twitter rants, calls by one player for Davis Cup captain Lleyton Hewitt to resign, embarrassing on-court comments. And, to make matters worse, few decent results.

The exception, in a big way, is Alex de Minaur, who advanced to the third round at the Australian Open and will play 17-time major winner Rafael Nadal on Friday. And John Millman gave a top performance before losing Wednesday in five sets to Roberto Bautista Agut.

After that, it’s not pretty.

Sure Hewitt wasn’t always the consummate “good bloke” — as Australians like to say — in his day, arguing with chair umpires and fellow players and media, but he seems mild mannered compared with the likes of the self-imploding, dynamite-like duo of Bernard Tomic and Nick Kyrgios.

After Tomic lost in the first round, he called on former No. 1-ranked, two-time major winning Hewitt to resign as Davis Cup captain. The two have been feuding for more than a year after Tomic claimed that Australia couldn’t win without him and Hewitt countered by saying Tomic wouldn’t be chosen for further international duty as long as he was in charge.

Tomic’s form wouldn’t see him chosen anyway for Australia’s Davis Cup first-round tie against Bosnia  and Herzegovina in Adelaide in February, but Tomic went a bit further, suggesting Hewitt has a personal interest in players he is promoting.

“No one likes him anymore,” Tomic said of Hewitt. “We have a lot of issues that not a lot of players are happy about. We all know who those players are. Myself, (Thanasi) Kokkinakis, (Nick) Kyrgios.”

Hewitt wasn’t about to get involved in a stoush with Tomic, saying it was “Bernie being Bernie and losing and going on and complaining.”

After Tomic’s comments, Kokkinakis and Kyrgios denied that they had any issue with Hewitt, but Kyrgios’s Twitter comments on Wednesday night during de Minaur’s match appeared to suggest otherwise.

Kyrgios posted a poll to his followers, asking whose match Hewitt was watching.

He provided two options: “Demon” (de Minaur’s nickname) and “No one else”.

Australian No.2 Millman and No.3 Matt Ebden were playing second-round matches at the same time as de Minaur. Kyrgios appeared to suggest that Hewitt only is interested in de Minaur, the teenager who Hewitt has been mentoring along with his Spanish coach Adolfo Gutierrez.

Tomic and Kyrgios reached the Wimbledon quarterfinals as teenagers — Tomic in 2011, Kyrgios in 2014 — but neither has been past that stage at a major since.

Kyrgios, who is Australia’s fourth-ranked player now, removed his Instagram post not long after. He also criticized Hewitt during the Brisbane International for not watching him or Kokkinakas play.

John Newcombe, who won seven Grand Slam singles titles in the 1960 and 70s, including Wimbledon three times, urged Hewitt not to get involved in the argument.

“I said to Lleyton the other day: ‘Things that are being said and all that, take the high ground,” Newcombe told the Australian Associated Press. ‘You don’t have to defend yourself. Everyone sees what you’re doing out there.’”

“The general public can see what Lleyton’s doing, but every time Bernie (Tomic) gets a microphone he attacks Tennis Australia or someone in it.”

Millman said after his loss to Bautista Agut that he’s felt “quite well-supported by the captain, by the coach, by the support staff,” but said he liked Tomic, describing him as “larrikin,” and Kyrgios, a “top bloke.”

Perhaps Millman has the best solution.