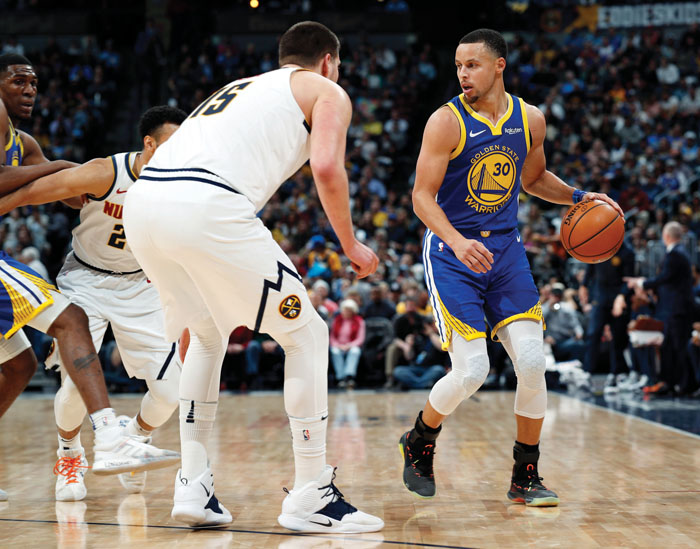 DENVER (AP) — Stephen Curry and Klay Thompson each scored 31 points as the Golden State Warriors, propelled by an NBA-record, 51-point first quarter, regained the top spot in the Western Conference by routing the Denver Nuggets 142-111 on Tuesday night.

Golden State cruised to a fifth straight win to move a half-game in front of the Nuggets, who had their 12-game home winning streak snapped.

The showdown between the top two teams in the conference proved a little too big for the Nuggets, with Curry and Company putting on a shooting exhibition all night long. The clinic began early with the Warriors erupting for 51 points in the opening quarter, breaking the old mark of 50 held by several teams. The last time it happened was also against Denver when Phoenix scored 50 on Nov. 10, 1990.

Golden State shot a blistering 60 percent from the field, had 38 assists and hit 21 3-pointers in leading wire-to-wire. Kevin Durant finished with 27 points.

PHILADELPHIA (AP) — Joel Embiid had 31 points and 13 rebounds, and Philadelphia scored 83 points in the first half in a thrashing of Minnesota in Jimmy Butler’s first game against his former team.

The Golden State Warriors were the only team to score more first-half points in a game this season when they dropped 92 on the Chicago Bulls on Oct. 29.  The Sixers hit a team-record 21 3-pointers and reached their highest point total in the 22-year history of the Wells Fargo Center.

Butler scored 19 points in the first meeting with Minnesota since it sent him to the 76ers in a package deal that brought forwards Robert Covington and Dario Saric in return.

ATLANTA (AP) — Trae Young had 24 points and 11 assists to win the showdown of past and former Atlanta point guards, leading the Hawks over Oklahoma City.

Former Hawks point guard Dennis Schroder scored 21 points in his return to Atlanta. Schroder struggled early but had 14 points in the third period when the Thunder outscored the Hawks 41-27 to reclaim the lead.

Atlanta was similarly dominant in the second period, outscoring Oklahoma City 45-30 to match its high mark for any quarter this season. After holding a big lead of 15 points, the last time at 70-55, the Hawks led 70-59 at halftime.

MILWAUKEE (AP) — Giannis Antetokounmpo had 12 points, 10 rebounds and 10 assists in his fourth triple-double of the season, and Milwaukee cruised past Miami.

Justise Winslow and Hassan Whiteside had 19 points apiece for Miami, which fell to 21-21.

Myles Turner returned for the first time in four games to finish with 18 points and six rebounds. Turner was nursing a sore right shoulder over the last week.

Indiana got off to a hot start thanks to Bogdanovic, who scored the Pacers’ first 10 points. The Pacers doubled the Suns’ total in the first quarter, leading 38-19 at the end of the period.