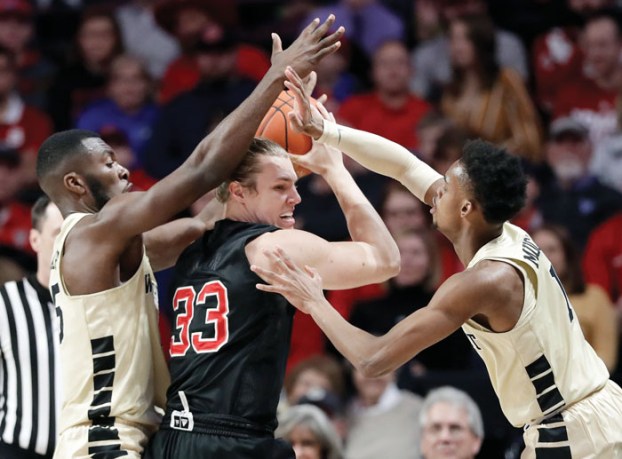 Wake Forest holds on against the Wolfpack 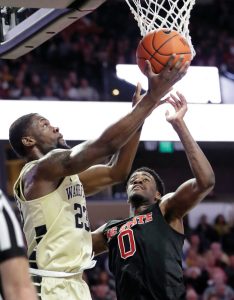 WINSTON-SALEM (AP) — Wake Forest played its best basketball all year while building a big lead against No. 17 North Carolina State, only to see the Wolfpack put together a frantic second-half rally.

Somehow, a team that lost all three of its Atlantic Coast Conference games by double figures found a way to recover.

Freshman Jaylen Hoard had 16 points and 10 rebounds, and the Demon Deacons beat the Wolfpack 71-67 on Tuesday night to extend N.C. State’s frustrating run in Winston-Salem.

But the Demon Deacons never let the Wolfpack go ahead, twice pushing the lead back up to six before getting some big plays from graduate transfer Torry Johnson down the stretch to hang on.

“It just shows we fought through adversity,” said Brandon Childress, who had 10 points for Wake Forest. “When they came back, we didn’t point fingers. … We kept moving the ball. We trusted each other. We ran the offense. We stayed locked in defensively and fought through.”

Torin Dorn scored 18 points for the Wolfpack, and C.J. Bryce added 17 points for a team missing starting point guard Markell Johnson. N.C. State had an awful start by shooting just 30 percent while missing 13 of 14 3-pointers before halftime, but finally started connecting from outside and cut down on turnovers to get back in it.

But after Daniels’ shot, N.C. State missed eight straight attempts  — three for the lead —  to give the wobbly Demon Deacons a chance to stabilize themselves after going 7 1/2 minutes without a basket.

Wolfpack coach Kevin Keatts wasn’t thrilled with the shot selection from his team after the comeback.

“If you look at that 10-minute stretch in the second half where we played extremely well to get back in it, we shared the basketball,” Keatts said. “Everybody got involved … and we fed off each other.

“Toward the end, I think once we tied it up, I thought a couple of guys played hero basketball.”

N.C. State: Johnson was out after taking a hard fall during a win against Pittsburgh, pulling 11.6 points and 4.1 assists from the lineup. And the Wolfpack looked out of sorts early by launching a lot of 3-pointers while failing to force the Demon Deacons into turnovers with pressure defense. The Wolfpack looked sharper in their comeback, but needed a few more plays to steal this one.

“The first half, we didn’t play our game,” Bryce said. “We didn’t play well on defense, a lot of shots weren’t falling for us. … We picked it up in the second half but happened to fall short.”

Wake Forest: The Demon Deacons were positioned to celebrate, and then staring down a soul-crushing collapse before finding away to hang on. It was a desperately needed win for Danny Manning’s club.

“For our guys to be able to bow their neck down the stretch when N.C. State went on their run, to find ways to give us a chance to win the game, I thought some of our younger guys took a step,” Manning said.

Torry Johnson, who arrived from Northern Arizona and was averaging 5.4 points entering Tuesday, finished with 11 points, including a jumper with 1:19 left and the Demon Deacons protecting a one-point lead. He followed with two free throws with 13.3 seconds left to cap a wild night in Winston-Salem.