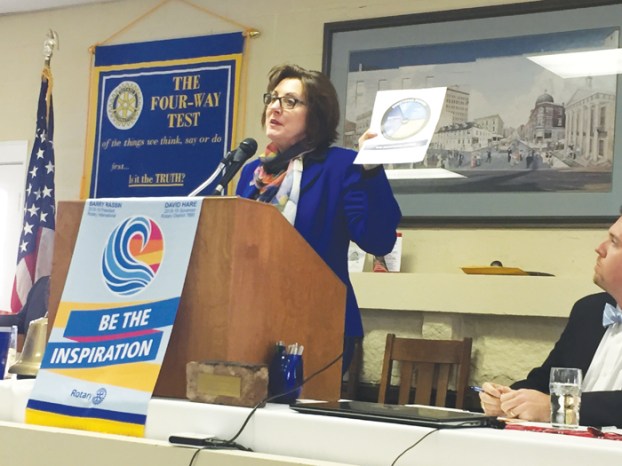 Thirty-four schools, each with $153,123 in annual capital needs, reaches a total upkeep cost of more than $5 million, she said.

Moody said the costs create an annual deficit of almost $3 million when stacked against the $2.4 million allocated by the county each year for school capital needs.

“That doesn’t even address the fact that our schools in the Rowan-Salisbury Schools district are smaller than they should be,” Moody said.

An ideal high school size is 1,500 students: enough to play 4-A ball, to facilitate “all of the girls sports and all of the boys sports” at ninth-grade, junior varsity and varsity levels, she said.

Moody continued that larger schools mean larger faculties with increased pools of knowledge and expertise. That meant a wider range of extracurricular activities and courses.

What wouldn’t increase with a larger student body? Classroom size, she said.

“We get our teachers from allocations based on the average class size that we set,” she said. “Teachers will move with the students.”

Much of Moody’s presentation was dedicated to these and other pragmatic defenses of consolidation. The cost of Rowan’s 6,000 empty school seats and the steps the school board has taken to address a budget deficit have for years chipped away at the system’s fund balance, she said.

The way she sees it, she said, there are two options: the county could raise taxes and double the amount of money allocated for school upkeep each yea, or the system could look at closing schools.

“The board is at a place where they’re going to have to make some very difficult choices,” she said. “But I don’t believe the choice to do nothing can be a choice.”

Moving on from her defense and into the proposed steps of the plan, Moody said the costs of the three-tiered plan included demolition of buildings only as a failsafe.

“We wanted to be sure that we put enough budget money in there that we could demolish a school if we need to,” she said. “We didn’t want a school like the Dunbar school that’s an eyesore because it was never taken down and now it devalues the property.”

Demolition costs would be about $500,000 per site, she said, but the school board is willing and eager to find other uses for the emptied buildings. Tier 1 of the plan would empty seven schools.

“If we can find ways … to restore these buildings or give them different purposes, it would absolutely be advantageous for us,” she said. “We will do that every chance we get.”

Addressing concerns from audience members, Moody said that while consolidation would eliminate some administrative staff positions, she does not expect any workers to be displaced.

“We have enough turnover and attrition every year that … we would be able to absorb those administrators,” she said.

She also addressed comments that the proposed plan appears to slight the North Rowan community, with only $700,000 allocated to the closure and demolition of North Rowan High School compared to millions of dollars factored for other districts.

“North does not show up on this plan,” she said. “I know there are conversations about alternative things that could take place at that site, but we build schools where the student population is.

“When you look at the data of student population and attendance, then because of transportation issues and a number of other things, we don’t typically build schools to support a community. Although that’s important, … it’s not the main focus of the school district.”

SALISBURY — Catawba College has exceeded one of the goals of its Mind Body Soul Campaign for Growth. The fundraising... read more