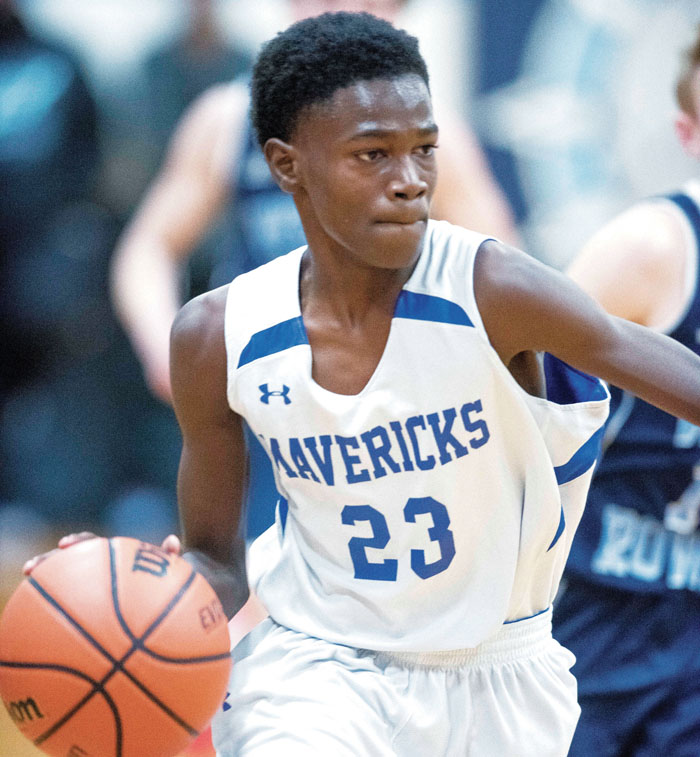 SALISBURY — West Rowan Middle students chanted Athan Gill’s name when he left the floor with 35 points etched in the scorebook and 39 seconds left on the clock.

But as marvelous as Gill was on Wednesday evening, it was the North Rowan Middle Mavericks who hoisted the championship trophy. They had two standouts, Darell Carpenter (21 points) and seventh-grader Mike Geter (15). Together, that pair of slashers off-set Gill, who was scoring from everywhere.

“Gill is one heck of a player,” North coach Anthony Hipps said. “He was hard to deal with. We knew he would be.”

Despite the thrills and skills the 6-foot-1 Gill provided, North took a relatively easy 63-44 victory. The Mavericks were tough and team-oriented and they were quicker and longer than the Bulldogs.

Second-seeded North (13-4) had to survive rival Knox on Tuesday to get to the final. Fourth-seeded West (11-6) stunned top-seeded Mooresville to get there. North expected to see a Mooresville team that the Mavericks had lost to twice in Wednesday’s championship matchup, but West, playing on in its home floor, knocked off the high-powered Red Imps.

“I could say beating Mooresville took something out of us, but I’m not going to use that as an excuse,” West coach Ashley Poole said. “We just didn’t play well, didn’t play today like we did against Mooresville. We usually make a lot of 3-pointers, but North’s defense was good. They used their quickness to take the 3-point line away from us.”

Gill started fast. His confident 3-pointer gave the Bulldogs a 11-7 lead at the end of the first quarter.

But the Mavericks owned the second quarter. Specifically, Carpenter owned it. He scored 15 of his 21 in that decisive six-minute period.

“Carpenter dropped 24 on Knox when we really needed it and then he had another big game tonight,” Hipps said. “I was worried about what that Knox game would take out of us. But as soon as I got here our guys were telling me they were ready to play — and they were ready.”

Carpenter attacked the rim and scored with a variety of twisting moves throughout the second quarter. North was turning sticky defense into easy offense. By halftime, North led 30-23 and the game had turned completely around.

“We picked up our defense a lot in the second quarter,” Carpenter said. “We wanted to be champions.”

Carpenter passed the baton to Geter in the third quarter. Geter’s 10-point quarter was the knockout punch. By the end of the quarter, North led 50-31, and there was no way West was coming back from that.

“We were playing better in the third quarter, moving the ball a lot better,” Geter said. “And even if we missed our first shot, we got the rebound. We had a lot of second-chance points.”

There was nothing left to be decided in the fourth quarter — except how many Gill could score. He had 13 in the final period, 19 in the second half. He executed a couple of spinning post-up moves that had fans screaming.

“We always try to play fast, but we didn’t execute as well as we wanted to tonight,” Gill said. “And North Rowan is really good. That’s a very fast team.”

Hipps, a cousin of North Rowan 2,000-point scorer Sophilia Hipps, said the path to the championship was a smooth one, with hard-working youngsters who have been well-schooled by his coaching predecessors and mentors Lamar Wilkerson and Reggie McConneaughey.

“I told our guys that they deserved this championship, but they still had to go out there on the floor and earn it,” Hipps said. “Everything you get in life has to be earned. Our guys earned this championship by playing hard and playing together.”