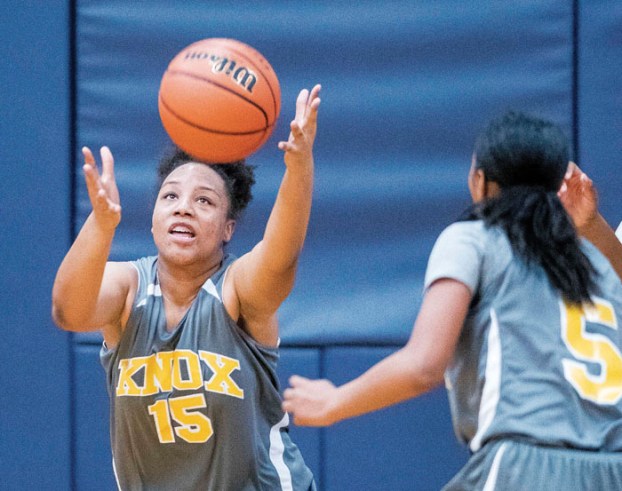 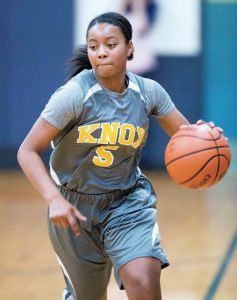 SALISBURY — Erwin’s girls began like a tornado, but it’s how you finish, not how you start.

At the end, it was Kyla Bryant, Jamecia Huntley and their Knox basketball teammates who were celebrating the Rowan County Middle School Tournament championship.

Bryant, a dynamic guard who is a ball-handler, floor leader and shooter, scored 20, while Huntley, a bouncy interior player, had 12. They combined for 32 points in Knox’s exciting and intense 36-30 victory.

“Kyla and Jamecia, they’re best friends, do everything together,” winning coach Justin Pauley said. “They’re also good leaders. This team has been practicing hard for this.”

Erwin (15-2) was seeded first for the tournament, although second-seeded Knox (16-1) shared the regular-season title with the Eagles. They were the top two teams all season, and there was little doubt they’d meet in the championship game played on Wednesday evening at West Rowan Middle School.

“We knew from the start it would come down to us and Erwin,” Pauley said. “Erwin has an awesome team.”

Erwin looked awesome and unstoppable in the opening minutes. The Eagles led 9-0 in a hurry. Pauley had to call a timeout to settle things down.

“We were moving slow,” Bryant said. “I was nervous all day thinking about the game and I think we all were nervous. We had to find a way to speed the game up. We had to get our energy back.”

After that timeout, Bryant made the first bucket for Knox. Then she made two free throws. Then Huntley got involved, and suddenly the Trojans were on a roll and a 13-0 run of their own.

“Erwin always plays well in the first and third quarters,” Pauley said. “We weren’t surprised they started fast. We stayed together. We kept hustling.”

A Huntley free throw made it a 14-0 run for Knox as the second quarter started, but then Erwin started to fight back. Knox took a 19-17 lead to halftime.

Leah Hinceman, a tall guard with an inside/outside game, scored three buckets for the Eagles in the third quarter to keep her team close, but Erwin’s other two big scorers, Haley Dalton and Icesis Nwafor weren’t finishing some great opportunities inside.

Hinceman scored 13 to lead the Eagles, but Dalton (7) and Nwafor (6) were held well below their usual numbers.

“We missed a lot of layups and we missed 10 free throws, but the thing that really hurt us was 25 turnovers,” Erwin coach Kim Caldwell said. “You have to take care of the ball in a game like this, and we didn’t. That 14-0 run they had changed the game, and almost all of that was off our turnovers.”

When the long-armed, 6-foot-1 Dalton stuck back a missed free throw by Nwafor, Knox’s lead was down to two, but Bryant answered with a clutch 3-pointer that was the biggest shot of the game.

When Bryant scored on a drive, and Huntley got a bucket inside, the lead was nine with the clock ticking under 4 minutes and Knox was headed for a celebration.

“We played hard today, but a game like this usually comes down to who wants it the most, and Knox really wanted it,” Caldwell said. “Kyla Bryant won it for them. She loves the game and she is nothing but the truth. She’s got it all.”

NOTES: Pauley was an all-county varsity freshman at South Rowan in 1997 before his family moved out of state. He was a 1,000-point scorer at Houghton College in New York. … Bryant’s parents starred at Catawba — Lakai Brice, who now coaches the Salisbury High girls, and Quentin Bryant, who starred at North Stanly High before coming to Catawba. … “Pink” Corpening, a little guard, didn’t score for Knox, but her defensive energy was a factor.