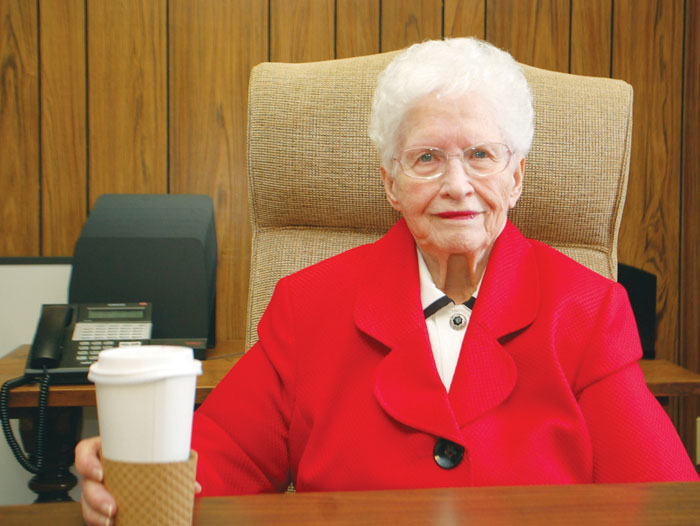 Coffee at the ready, Joan Troutman reports for another day at the Ketner law office. Though she plans to retire after 60 years as a legal assistant in Salisbury, including close to 46 years with the Ketner firm, Troutman says she still might pop in to take care of unfinished business. Mark Wineka/Salisbury Post

Joan E. Troutman could have retired 20 years ago like most people, especially after she had heart surgery. It never crossed her mind.

Now that she’s finally ready — she’ll be 86 on Valentine’s Day — Troutman adds a disclaimer. Thursday is supposed to be her last day as a legal assistant at the Ketner & Dees law firm, but she says there are some estate things she is working on “that I don’t want to dump in somebody’s lap.”

She also has told the firm’s founder, Glenn Ketner Jr., that she will be available when needed.

“I’d be glad to help him out anytime,” Troutman says. “That’s what you do for people.”

Ketner has a arranged for a luncheon at the Country Club of Salisbury to celebrate Troutman’s 45-plus years with his office and almost 60 years as a legal assistant in Salisbury overall.

The gathering will include past and present members of the firm, along with some of Troutman’s family. “Family” is the operative word after all these years.

“They have been family to me,” Troutman says of Glenn Jr. and his late father, Glenn Sr., who headed Rowan Investment. “In fact, the whole office is family to me.”

Glenn Ketner feels the same way about Troutman. He hopes the office has been an extended family for her and says there’s a certain pride at the firm that it has had many employees stay for decades.

Why did Troutman continue for so long, besides being good at her job?

“I like to think for the same reason I’m continuing to work,” Ketner says. “You enjoy what you do, and you like the people you work with, helping people through tough times and helping people solve problems.”

In retirement, Troutman looks forward to participating in more things at the church she has belonged to her whole life, Union Lutheran. She’ll be more available for her five grandchildren and three great-grandchildren.

She declares she is going to sleep in for once, and she might do something outlandish, such as go shopping.

It’s something she has never really done. Something else Troutman never did — though she worked for 60 years — was fill out a job application.

Joan (people who know her have pronounced it “Jo-Ann” since she was little) married James Troutman, a sweetheart from church, when she was in her final year at Salisbury Business College.

James wanted her to stay home as they started a family — they would have two boys and a girl — and it wasn’t until she was 27 that a friend asked if Joan could fill in for her at attorney Bill Coughenour’s office.

The friend was going on maternity leave. For Joan, there was no interview, no job application.

“She didn’t come back,” Troutman says of her girlfriend, “so I continued.”

Her idea at first was to work only part time while her mother watched the children. But Joan found she loved the work, of which 75 percent or more related to real estate transactions.

Coughenour spent much of his day researching at the Register of Deeds Office. She stayed back at the office, organizing and typing all the legal documents while delighted to have a new electric typewriter.

Troutman started full time with Coughenour on Oct. 1, 1959, and stayed with him into January of 1973, when she quit for a month in anticipation of joining Glenn Ketner Jr.’s new law firm, which he had opened in 1972.

When Ketner was a law student at Duke University in the 1960s, he had worked in Coughenour’s office.

“I thought, OK, that’s the nicest young man I’ve ever met,” Troutman recalls. “I still think the world and all about Glenn today.”

Troutman took that month off between the Coughenour and Ketner firms because she didn’t want it to look as though Ketner had conspired to take her away from her longtime boss.

“She knew more about real estate than anyone else in town — without a doubt, more than many attorneys,” Ketner says. “When she started with me, she had that vast experience working with Bill Coughenour. That was an immediate help.”

Troutman knew the necessary people. She worked well with lenders and other legal assistants in town.

“Her ability to relate to people in whatever issue was at hand was one of the absolute wonderful things about Joan,” Ketner says.

While being a paralegal is something you go to school for, Troutman was a paralegal by experience and could have taught a class, particularly in real estate and estate administration matters, Ketner says.

Over the years, Troutman transitioned exclusively to estates. Ketner says her quality of relating to people shone even brighter in estate work because she could empathize, sympathize and solve problems.

“That’s what my law practice is all about — helping people solve problems,” Ketner says.

Troutman confronted some rough patches of her own during the years. Her oldest son, Dale, died during heart surgery when he was only 29.

Glenn Sr. had noted how depressed Joan was in the weeks after Dale’s death. He called her into his office for what he said would be a minute, but Ketner talked to her for an hour about death and his own experiences with loss.

“That helped me so much,” Joan says. “He was just a gentleman.”

When she was 65, Joan suffered a heart attack while vacationing in Florida and required six bypasses during a surgery performed in West Palm Beach. She recovered and went back to work.

Then in 2007, James, her husband of more than 55 years, passed away. And that period was especially difficult because longtime friend Glenn Ketner Sr. died, too.

As a way of getting past James’ death, she says, “I kept working for me. … You have to face things as they come.”

Joan’s parents were Hilbert and Zelia Propst Earnhardt, and she was the oldest of three boys and two girls. Hilbert Earnhardt was a barber in Spencer, and much of his savings were wiped out during the financial crisis accompanying the Depression.

“He never did trust the banks after that,” Joan says.

She attended from Granite Quarry School for all 12 grades and did well in her academics. She thinks she was the only person in her junior class to make all A’s, “but that’s not a fact,” she cautions. “That’s just what I remember.”

Troutman credits the late Jean McCombs with teaching her shorthand and typing in high school. She can’t believe she reached 55 to 60 words a minute on the clacking manual typewriters of old.

Joan played the organ in church as a teenager. She sort of regrets not staying with the instrument. She did plenty of singing, however, in the church choir for close to 50 years and still sings in the funeral choirs when possible.

The law office staff figured Joan’s 45 years, 10 months and 15 days with the firm translate to 16,757 days. In her tenure, she went through two office additions and two office locations.

She has worked with 35 different people, including 10 attorneys.

“And trained some of them,” Joan says. “And, of course, they taught me things, too.”

Glenn Ketner Jr. says Joan has been an extraordinary assistant and is a dear, sweet, delightful person who knows how to get her way at times.

After his father died, Joan informed Glenn Jr. — or was it reminding him — that Glenn Sr. wanted her to have his parking space under the office carport.

She’s had it ever since.