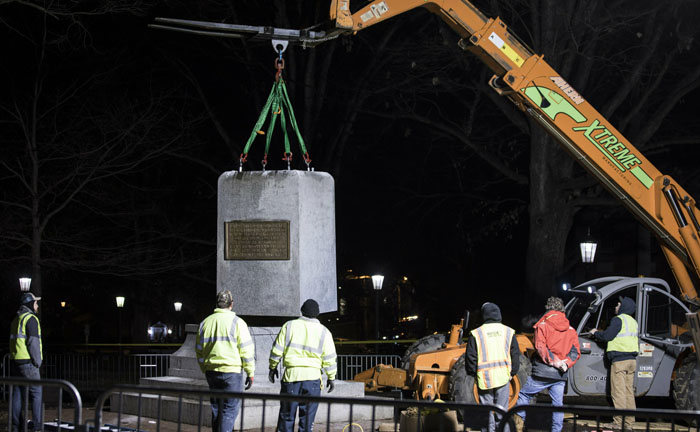 The first and largest piece of the remnants of a Confederate statue known as Silent Sam is lifted before being transported to the bed of a truck early Tuesday at the campus of the University of North Carolina at Chapel Hill. Julia Wall/The News & Observer via AP

RALEIGH — Hours after the last remnants of a Confederate statue were removed overnight from the state’s flagship public university, the university system’s governing board pushed out the chancellor, who had ordered them gone.

UNC-Chapel Hill Chancellor Carol Folt had said Monday that she would leave her job at the end of the school year in May, but the Board of Governors on Tuesday made her departure effective at the end of January.

The removal of the statue’s marble pedestal could increase pressure on the board to give up on plans to restore the monument.

Folt ordered the base for the toppled statue known as Silent Sam removed because of continuing unspecified threats since she and university trustees last month proposed a new location away from the heart of the university, she said.

“Despite our best efforts, even since that time, threats have continued to grow and place our community at serious risk. This led me to the action that I authorized,” Folt said in a conference call with reporters. “While I recognize that some may not agree with my decision to remove the base and tablets now, I’m confident that this was the right one for our community.”

Folt did not detail the ongoing threats, and university spokesmen said they couldn’t provide further information.

The stone base and attached metal tablets honoring former students who fought for the Confederacy were removed in the middle of the night. A work crew with a large truck, a forklift and floodlights took the last piece of the base from the main campus quad about 2:30 a.m., leading to cheers by a crowd that gathered to watch.

Folt said the timing was dictated by a desire to avoid disrupting the campus and protect traffic and pedestrian safety from operating cranes and forklifts.

The massive pedestal and memorial plaques will be stored, like the statue, while their fate is decided, she said.

The statue has been in storage since it was pulled down last August by protesters who consider it a racist symbol dedicated in 1913 by a former Confederate reading a white supremacist speech.

Folt’s move drew an angry response from Board of Governors Chairman Harry Smith. The board had given itself until mid-March to come up with a plan for the statue, and Smith said that timeline hasn’t changed.

Smith denied Tuesday that Folt was being punished for what he called “a very bold action.”

“There are definitely camps in this,” Smith said. “We take a look at what we think is the very best for the institution. We feel strongly that it’s probably in the best interest to go ahead and allow a change in leadership so we can move to a healing process.”

The Sons of Confederate Veterans issued a statement early Tuesday saying Folt “has effectively erased the contribution and sacrifice of these brave veterans and the tribute paid to them by subsequent generations.”

“The law says that she can act to keep people safe. Public safety is an element of the statute, and that was her determination. And she was within her rights to make that decision,” Stein said in an interview.

Folt had been criticized both by those who wanted the statue gone for good and those who said state law requires it to be restored to where it had stood in McCorkle Place for more than a century.

Folt’s announced departure comes shortly after a similar decision by university system President Margaret Spellings, who had also frequently drawn protesters’ barbs. Both were left with weakening support after the university leaders who selected them left and the 28-member governing board became more conservative.

The Republican-led legislature appoints all the board’s voting members.

“There has been discontent on the political right not just with Chapel Hill but a lot of public universities being too liberal,” said Ferrel Guillory, a former political journalist and current director of UNC-Chapel Hill’s Program in Public Life. That conservative turn comes at a time when issues of race and its place in American history have become more urgent, Guillory said.

“Societal trends and issues play themselves out on a big university campus,” Guillory said in a phone interview. “The education of students and scholarship of faculty doesn’t take place in isolation — just in the classroom — but it’s appropriate for a public university to be engaged with the public.”

Folt, who came to UNC in 2013 from Dartmouth College, said Monday she is proud of work she has overseen on the Campaign for Carolina fundraising drive that raised more than $2 billion as of last summer, or about half of its ambitious goal.

But Folt’s tenure also saw UNC sued by a transgender employee over the state’s so-called bathroom bill, as well as the Silent Sam debate growing more heated after a deadly white nationalist rally in Virginia in 2017.