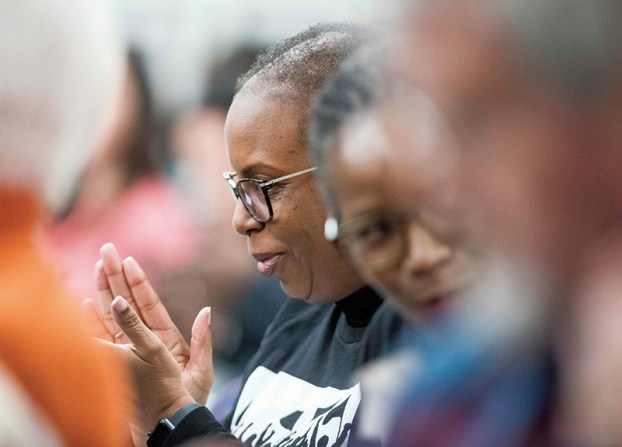 JON C. LAKEY / SALISBURY POST Dr. Regina Dancy was the first to take the podium during public comment at the Jan. 15, 2019 city council meeting in which the Salisbury City Council passed a Resolution of Reconciliation that condemned lynchings in 1906, violence against African-Americans and systemic racism. Salisbury, North Carolina 1/15/19

SALISBURY — In what Mayor Al Heggins called a tremendous day for Salisbury, the City Council on Tuesday unanimously approved a resolution condemning 1906 lynchings of three black sharecroppers, the murder of a family in their farmhouse the same year and manifestations of injustice as well as starting the process of racial reconciliation

Dozens of people filled the City Council chambers in City Hall for the meeting, many of whom spoke passionately about the need to pass the document, formally known as the “Resolution of Reconciliation.” People cheered when the resolution was passed after debate among council members of the process by which it arrived in front of them.

“This is tremendous because it shows that we are a leading southern city, that we are the kind of community that can embrace the good and the tragic in our history and move forward,” Heggins said.

The resolution passed on what would have been civil rights icon Martin Luther King Jr.’s 90th birthday.

The document had first been presented in August, the same month as the 1906 lynchings of Nease Gillespie, son John Gillespie and Jack Dillingham — who were charged in the murder of the Lyerly family in the west Rowan community of Barber Junction. They were dragged from the county jail by an angry white mob and taken to what is now North Long Street before being tortured, lynched and shot.

But the resolution went further than the lynchings, condemning “all acts of violence and racial terrorism perpetrated against African-Americans, from which they were not rightfully protected during the Jim Crow era” and initiating the process of “reconciliation of racial injustice.”

Disagreement about the contents of the resolution in August prompted the City Council to ask a committee known as Actions in Faith and Justice to draft a revision, which had not initially been on Tuesday’s agenda but was added after prodding from local residents and supporters of the resolution.

“The city of Salisbury’s elected officials and citizens have a vital role and responsibility in creating policies and enacting practices that support equity,” the resolution states. “It is the duty of Salisbury’s elected officials and citizens to identify, acknowledge and eliminate policies and practices that create or uphold racial disparity.”

Councilwoman Karen Alexander, who called for residents of Salisbury to “commit to action” in August 2017 when serving as mayor, said the resolution’s unanimous passage carries particular weight because it was endorsed by all five members of the City Council, unlike a mayoral proclamation related to the events of 1906, which Heggins and Alexander had both issued previously.

The resolution passed Tuesday did not include a proposed Equity Commission — included in the revision offered by Actions in Faith and Justice — but multiple council members said they support its creation. As proposed Tuesday, the Equity Commission would have eight members and be charged with “the task of identifying, researching, and reporting policies and practices that obstruct equity or evidence disparity.”

Mayor Pro Tem David Post said he wanted to understand the commission’s jurisdiction and from what it would derive its authority.

Councilman Brian Miller said he is “not convinced” Salisbury needs such a commission and complained that the City Council hadn’t debated the need for its creation.

Alexander called the Equity Commission’s creation and racial reconciliation “two different issues” and suggested that the two be split and voted on by the City Council separately. She found a supporter in Heggins. However, Heggins called it disingenuous for the council to say “this isn’t what I asked you to do” after Actions in Faith and Justice worked to revise the resolution for months with no prior parameters.

Councilwoman Tamara Sheffield said the resolution didn’t necessarily say how the Equity Commission would be created. It only gave City Council members the power to do so.

“So, I still remain confused as why just this is bucking the process, not part of the process. I feel like we have to do (the resolution) to do those other things,” Sheffield said.

It was just that — process — that consumed much of the debate Tuesday. And the debate started early, shortly after the council convened and began talking about whether to add the resolution to the agenda.

There were questions about whether the city’s Human Relations Council had asked for the resolution to not be included on Tuesday’s agenda, if the HRC should have a role in revising the document and if it was appropriate for the City Council to consider it without the resolution first passing through an advisory board.

A planning or zoning matter wouldn’t come straight to the City Council without first passing through a lower board, Miller said. There are boards and commissioners for a reason, he said.

A majority of those who spoke during a 90-minute public-comment period on Tuesday overwhelmingly supported the resolution and groaned at times during arguments about process.

“This Resolution of Reconciliation is necessary and has been a long time coming,” said the Rev. Olen Bruner, who helped crafted the revised resolution. “It is time to take action beyond words alone. … We must not sit on the sidelines of life and watch injustice. Rather, we need to speak out and consciously push back against it.”

Susan Lee, also among those who crafted the resolution, said it would create a “firm foundation for our community’s well-being.”

Larry Ford was among the few who said the resolution needed changes. Ford said minor changes, which he did not specify, needed to be made and that it was good that the “European Americans” angry about the contents of the resolution were not in attendance. But Ford stressed that he was not angry about the document.

“I do not want this resolution to cause a lot of problems in this city,” Ford said. “We’re all Americans. We’re all citizens, and we all have to work together to accomplish all these things that we’re all trying to do.”

SALISBURY — As plans for school closures and consolidation linger, members of the Salisbury City Council are discussing how city... read more