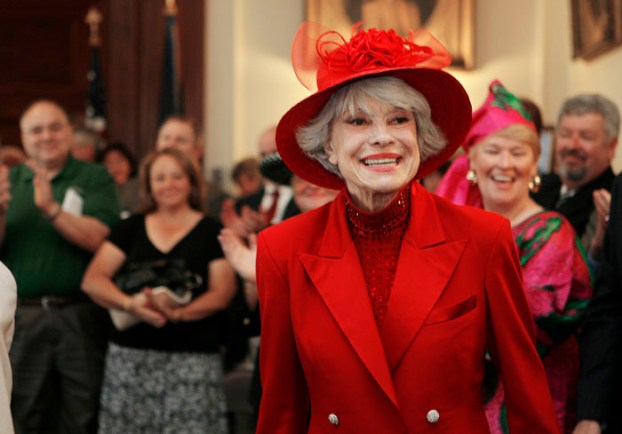 Her publicist, B. Harlan Boll, announced the death and said the cause was two strokes in the past year.

Channing was a gangly, dynamic, irrepressible presence on Broadway for more than seven decades.

Platinum blond and standing 6 feet tall, she made her breakthrough impression on audiences and critics as the beguiling gold digger from Little Rock, Lorelei Lee, in “Gentlemen Prefer Blondes” (1949). Her rendition of two of the show’s most memorable songs, “Diamonds Are a Girl’s Best Friend” and “A Little Girl From Little Rock,” launched her career.

Brooks Atkinson of The New York Times called her portrait of Lee a “most fabulous comic creation.” The production ran for two years on Broadway and was followed by an extensive national tour. It was based on a 1920s book by Anita Loos, who wrote the play with Joseph Fields, and featured music by Jule Styne and lyrics by Leo Robin.

Channing later told an interviewer that, given her unconventional look and voice, she was a nontraditional choice to play Lee.

“Anita Loos, who picked me when she wrote ‘Diamonds Are a Girl’s Best Friend’ for Broadway, said, ‘Either get the cutest, prettiest little girl in town as Lorelei or someone who can do a terrific satire,’ ” she said.

Channing so seamlessly disappeared into the character of Lee that some of her collaborators questioned whether she could ever play another part as convincingly. The role continued to dominate her career long after she appeared to much praise in other musicals such as “Wonderful Town” (as a replacement for Rosalind Russell in 1954) and in “The Vamp,” (1955), a satire about a farm girl who becomes a silent-era screen star.

She also was a frequent collaborator onstage with George Burns in an act that combined comedy, song and dance.

Then, in 1964, Channing largely managed to wipe away the memory of Lorelei Lee with her staring role in “Hello, Dolly!” as an aggressive, shrewd, ever-optimistic matchmaker. Based on a Thornton Wilder play, “Hello, Dolly!” featured music and lyrics by Jerry Herman and a title song that became a pop standard.

But it was Channing who defined the show’s spirit. Playing Dolly Gallagher Levi, a life-embracing widow determined to remarry into money, she imbued the show with a great depth of warmth and personality. Critic Walter Kerr, writing in the New York Herald Tribune, called her “glorious.”

Channing triumphed over Barbra Streisand, then appearing on Broadway in the musical “Funny Girl,” to win the Tony Award for best actress.

Her electric stage personality did not translate to a notable screen career. Her best-remembered Hollywood performance was in “Thoroughly Modern Millie,” a musical set in the Roaring ’20s and starring Julie Andrews and Mary Tyler Moore. Channing played an eccentric widow named Muzzy Van Hossmere.

Channing resented being overlooked for the Hollywood productions and was particularly critical of having Streisand “steal” the role of Levi for the much-hyped but unremittingly dull film version. She was gleeful when the film tanked, later telling one interviewer, “Barbra is one of our great creative forces, but a barrel of laughs, she ain’t.”

In 1974, she received another Tony nomination when she reprised the role of Lorelei Lee for the musical “Lorelei,” which featured updated songs and a revised script from the earlier source material.

She was honored in 1995 for her work on Broadway with a Tony Award for lifetime achievement. About that time, she embarked on a worldwide tour of “Hello, Dolly!” — still in the lead role.

Washington Post culture critic Tom Shales wrote that Channing’s revival was not just a sentimental revisiting of bygone talent. At 74, she was still captivating as Dolly, Shales wrote, and “seeing her do it with such grace and grandeur and pizzazz is an exalting experience, sort of like witnessing Cal Ripken’s shattering of Lou Gehrig’s consecutive-game record or a phenomenal last-second swish by Michael Jordan.”

Carol Elaine Channing was born in Seattle on Jan. 31, 1921, and grew up in San Francisco. Her father, a journalist and Christian Science lecturer, was a strong influence on her life. Channing, who remained committed to Christian Science beliefs throughout her life, never drank or smoked.

Channing’s interest in the stage evolved from a bid for the student council when she was 7. Instead of giving a speech, she did impressions of the teachers. Making students laugh convinced her of her talent for performing.

She briefly attended Bennington College in Vermont before heading to New York to pursue acting.

In her memoir, “Just Lucky I Guess” (2002), she wrote of auditioning for Abe Lastfogel, president of the William Morris talent agency, and trying to impress him with “a simple ancient Gallic dirge, in obsolete Vercingetorix French,” sung to the beat of a Haitian drum she brought along.

She added: “I sensed I was losing the great man’s attention, so I said, ‘Wait, Mr. Lastfogel, please. I have another song here that the girls at Bennington just love. It’s a Haitian corn-grinding song rendered by the natives as they stomp out the kernels with their feet.”

As he was rushing her to the door, she wrote, she broke into a Yiddish melody that convinced him of her promise. Lastfogel became her agent.

She first made a critical impression in the 1948 musical revue “Lend an Ear.” One of her numbers, a satire of 1920s musicals, was praised as a highlight of the show and helped propel her to stardom. The production also introduced Channing to choreographer Gower Champion, who as a director later cast her as Dolly Levi.

Channing wrote in her memoir that Broadway producer David Merrick also played a role in snagging her the lead in “Dolly.” Although the mercurial Merrick was a feared presence in the industry, Channing said she was fond of him, to a point.

“He was darling,” she once said of Merrick. “He was a great showman. He just wanted to be able to say ‘I hate you’ first.”

Channing’s first two marriages, to writer Theodore Naidish and Canadian football player Alexander Carson, ended in divorce. She had a son from her second marriage, Channing Lowe, who became the political cartoonist for the South Florida Sun-Sentinel.

Lowe took the last name of his mother’s third husband, Charles Lowe, whom Channing wed in 1956. Charles Lowe worked as his wife’s manager and publicist, and he became known for conspicuous bursts of applause and laughter at every Channing performance.

The pair were married for 42 years before a bitter split in 1998. She publicly accused him of being physically abusive, misappropriating her money and having sex with her just twice during the marriage. He denied the charges and sued Channing for defamation but died the next year before they formally divorced.

In 2003, she married her childhood sweetheart, Harry Kullijian, and he died in 2011.

Survivors include her son.

Throughout her career, Channing was known for her grit and commitment to her craft. When she developed an allergy to hair dye in the early 1960s, she began donning wigs to retain her blond bob. She also glued spiky fake lashes to her eyelids — so frequently, she said, it caused all of her natural eyelashes to fall out.

She played Dolly Levi more than 5,000 times and rarely missed a performance. Over the years, she reportedly performed the show with her arm in a sling, a patch over her eye and even with her foot in a cast.

“Performing is the only excuse for my existence,” she told the Times in 1995. “What can be better than this?” 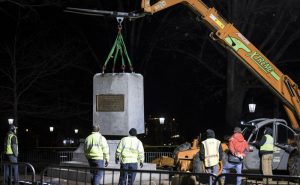 The first and largest piece of the remnants of a Confederate statue known as “Silent Sam” is lifted before being transported to the bed of a truck early Tuesday, Jan. 15, 2019 on the campus of the University of North Carolina in Chapel Hill, N.C. The last remnants of the statue were removed at the request of UNC-Chapel Hill Chancellor Carol Folt, who also announced her resignation in a move that increases pressure on the system’s board of governors to give up on plans to restore the monument. (Julia Wall/The News & Observer via AP) 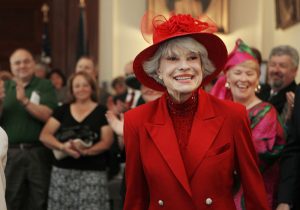 The Salisbury Police Department is warning about a scam in which residents are told to leave their doors unlocked so... read more