UNC plans to remove Confederate pedestal; chancellor to step down 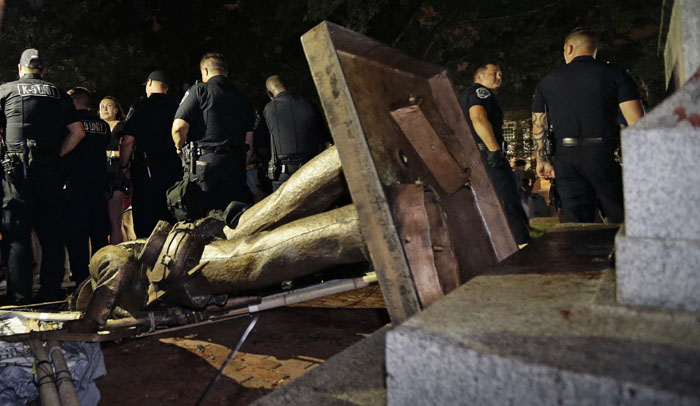 Police stand guard in August after the Confederate statue known as Silent Sam was toppled by protesters at the University of North Carolina in Chapel Hill. Gerry Broome/Associated Press file photo

North Carolina’s flagship public university plans to remove the pedestal where a toppled Confederate statue once stood on a main campus quad, its chancellor said Monday.

University of North Carolina at Chapel Hill Chancellor Carol Folt also announced that she will step down at the end of the school year.

Folt’s surprise order to put the pedestal in storage drew an angry response from the leader of the Board of Governors, which oversees the state’s public universities. But he stopped short of saying he would seek to stop the removal.

Folt said she is concerned about safety at the site that continues to draw protesters for and against the statue known as Silent Sam, but she gave no timetable for taking away the massive pedestal and bronze memorial plaques. The items would go into storage while their fate is decided.

“The presence of the remaining parts of the monument on campus poses a continuing threat both to the personal safety and well-being of our community and to our ability to provide a stable, productive educational environment,” Folt said. “No one learns at their best when they feel unsafe.”

The Board of Governors has given itself until March to come up with a plan for the fate of the statue, which also been stored since it was toppled last August by protesters who say it is a racist symbol.

“We are incredibly disappointed at this intentional action,” he said in a statement Monday night. “It lacks transparency, and it undermines and insults the board’s goal to operate with class and dignity.”

As the public face of the university, Folt had been criticized both by those who wanted the statue gone for good and those who said state law requires it to be restored to where it had stood in McCorkle Place since 1913.

The announcement of Folt’s departure comes weeks after the rejection of a plan, which Folt helped craft, to build a $5 million history center on campus to house Silent Sam. Folt’s announcement also comes shortly after the departure of the president of the statewide university system, Margaret Spellings, who had also frequently drawn protesters’ barbs.

The Board of Governors rejected that plan in December and announced that it would go “back to the drawing board” and make a new decision on the statue by March. Folt acknowledged in December that the plan to build the history center “didn’t satisfy anyone.”

Folt, who came to UNC in 2013 from Dartmouth College, said Monday that she is proud of the work she has overseen on the school’s Campaign for Carolina fundraising drive that had raised more than $2 billion as of last summer, or about half of its ambitious goal.

“As I have reflected on all of this, I’ve decided that this is the right time for me to pass the leadership of our outstanding university, with all its momentum, to the next chancellor,” she wrote Monday.

But Folt’s tenure also saw the debate over Silent Sam grow more heated in the months after a deadly white nationalist rally in Virginia in 2017.

Some UNC trustees issued a statement saying they supported Folt’s decision to remove the base of the statue and thanking her for her service.

“We thank Chancellor Folt for working tirelessly to elevate our university each and every day to serve the people of North Carolina and beyond,” said the statement signed by three trustees and issued by the university.

Board Chairman Haywood Cochrane, whose name wasn’t on the statement, didn’t immediately respond to a message seeking comment.

Silent Sam was torn down in August by protesters who decried its origins, including a racist speech by a former Confederate when it was dedicated.

In early December, Folt and the Chapel Hill campus trustees proposed a site for the new history center about a mile from the main quad where the statue previously stood, saying they had to balance safety concerns with a strict 2015 state historical law on Confederate monuments. At the time, Folt and several trustees said they would prefer moving the statue off campus but were restricted by the monuments law that allows relocation only in narrow circumstances.

The announcement of that plan drew hundreds of anti-statue protesters to the site of the pedestal hours later.

More demonstrations near the pedestal had occurred as recently as Sunday.