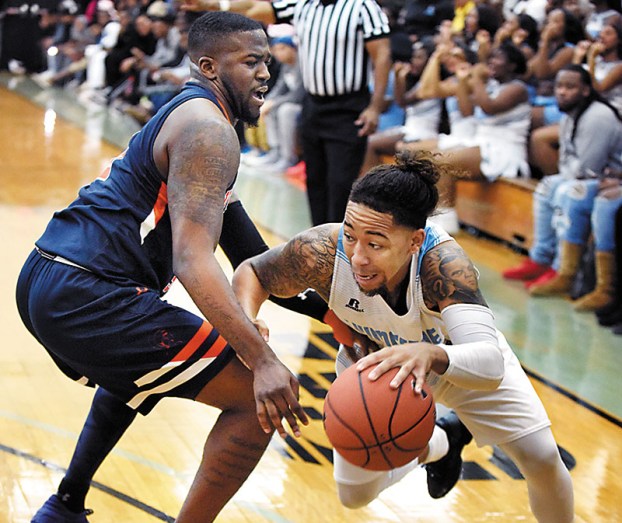 SALISBURY — Coach James Stinson may want to check under the hood of Livingstone’s men’s basketball team.

The Blue Bears are still driving around with their check-engine light on after dropping an 82-71 CIAA decision to visiting Virginia State on Saturday.

“We’re going through a lot of different things,” Stinson said after Livingstone (7-6, 1-4) suffered its fourth loss in five games. “The coaching staff did a great job of preparing them for this game. We just didn’t execute. That’s the biggest key.”

So was playing without 6-foot-10 center Kenny Grant, a Division I transfer who has now missed six games with a thumb injury. He’ll be evaluated on Monday and is expected back presently.

“He’s the only thing that’s missing,” teammate Roger Ray said after scoring 22 of his game-high 26 points in the second half. “It’s a lot like last year, when we really didn’t have a big man. (Grant) gives us a presence in the post, a physicality. He rebounds and finishes around the rim.”

Without Grant, the Blue Bears have struggled. While 6-10 sophomores Lydell and Navar Elmore are imposing playmakers, they don’t have Grant’s 267 pounds of bulk. “The twins are in the air, doing what they do,” Ray explained. “Kenny is the bruiser.”

Virginia State (12-3, 4-0) capitalized by outrebounding LC 26-14 in the decisive first half. The guests used an early 10-2 run and opened a 16-8 lead when 6-9 sophomore William Vedder drained one of the Trojans’ eight first-half 3-pointers. Late in the half teammate Cedric Wiggins banked home a jump shot from inside the lane that provided a 45-25 VSU advantage.

“We played really well in the first half,” said winning coach Lonnie Blow, Jr. “Our defense was on-point and we moved the ball on offense. But at halftime, we tried to warn our guys that a team like Livingstone will come at you hard in the second half. We had to withstand some runs and fight through some full-court pressure.”

Virginia State went nearly nine minutes without a field goal in the second half, yet Livingstone still found itself down 76-55  following Armond Griebe’s left-side leaner with 4:22 remaining.

“It was a different kind of game,” soft-spoken Lydell Elmore said after contributing nine points and seven rebounds. “It felt like we weren’t ourselves in our own gym. We weren’t making shots we usually make.”

That changed in the waning moments. LC closed the game with a 16-6 scoring spurt, fueled by Ray and 3-pointers by Martel Handley and Jalen Fykes. The Blue Bears trimmed their deficit to 10 points when Ray converted two free throws with 28.5 seconds to play.

“I never felt like we were out of the game, even when they went up by a lot,” Stinson said. “You know the team we have. Eventually, we’re going to make a run. Our intensity changed. That was the desperation of being at home and not being able to take care of business at hand. We started turning them over a little more with a few run-and-jumps. And we got good selection and got to the (free throw) line. That’s something we have to work on in the first half of games.”

When it ended — and VSU had pocketed its eighth straight victory — Blow gave Stinson and the Blue Bears a deserving compliment. “Livingstone just has so much size and length, it makes it hard to match up with them,” he said. “They’re a team with a chance to get better. They create problems for you.”

And sometimes, for themselves as well.

“We just dug ourselves a hole,” Ray said. “And it was way too deep. Super deep. We tried, but we never got a feel for the game.”

NOTES: Livingstone shot 21-for-51 from the field, including 4-for-16 on three-point attempts. Junior Philip Owens II made three of Virginia State’s 11 3-balls. … Ray, who didn’t have a basket in the first half, finished 4-for-11 from the floor and sank all but one of his 17 free throws. He’s averaging a team-best 18.7 points-per-game. … LC junior forward Malik Smith played with a persistent ankle injury, producing seven points and three rebounds in 19 minutes. …The Blue Bears host Chowan at 7:30 p.m. Monday.