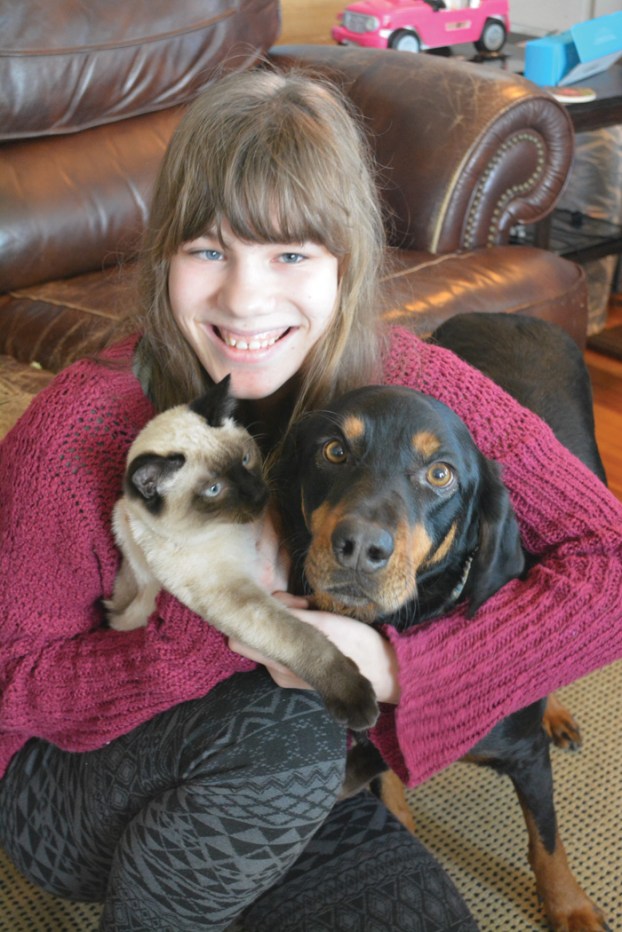 Katya, with Chase the kitten and Daisy the dog, loves animals and says she loves everything about the Myers’ family homeplace. 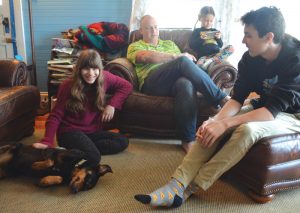 BEAR POPLAR — Imagine being a 15-year-old in an orphanage in Eastern Europe. On your 16th birthday, you “graduate” and are left to fend for yourself on the streets. The statistics are grim: 60 percent of girls end up as victims of human trafficking, while 70 percent of boys turn to a life of crime.
Now imagine living with a family out in western Rowan County, with plenty of fresh air and sunshine and bikes to ride and five cats, one kitten, and a dog to snuggle. And a family who loves you.
That’s exactly what’s happened to Katya, a 15-year-old girl from Ukraine, who’s spent the holidays with her host family, Conley and Jennifer Myers. Conley has two sons, Parkston, 16, and Evanston, 13, and he and Jennifer have a daughter, Margaret, 4. Through Open Hearts and Homes for Children, they hope one day to adopt Katya.

Based in Pennsylvania, Open Hearts and Homes for Children is not an adoption agency. Instead, it brings children from Latvia and Ukraine — typically between the ages of 7 and 16 — into a safe, nurturing environment, and introduces them to family life and culture in America. Some families who participate in the program have moved forward with the decision to adopt the children they have hosted. The Myers attend World Hope Worship Center, where some fellow members, Jon and Stephanie Lippard, hosted and later adopted their son Misha, 16, who’s from the Ukraine.
“It just spoke to us,” says Jennifer, who turns 36 this month, of the program.
She and Conley, 43, chose to host an older girl. Katya arrived in August and spent five weeks with the family.
“We developed a good relationship,” Jennifer says. “It’s an amazing opportunity we can give kids. And it’s completely changed our lives.”
Katya returned Dec. 16 for another visit with her host family, and will return to Ukraine on Sunday, Jan. 13.

The Myers have lived in the Bear Popular community for seven years. Conley grew up in South Carolina and Connecticut, where he met Jennifer, who grew up on Long Island, N.Y.
“My great-grandparents built this house,” Conley says, “so these kids are the fifth generation of our family to live here.”
When asked what Katya likes about living with her host family, her response (through Google Translate) is, “I like it all!”
Conley, the owner of Piedmont Classical Iron — a company which makes custom handrails and gates — and Jennifer, a nurse at the VA, had to complete a rigorous background check, which included a home study, letters of recommendation and reference, and even copies of tax records.

Conley and Jennifer made the decision to pursue adoption, but wanted to make sure the boys were OK with that decision. Parkston and Evanston both spend summers in Pennsylvania with their mom and their extended family.
“I thought it was great,” says Evanston, an eighth-grader at West Middle School. His older brother is a junior at Rowan County Early College. “It’s cool to think we may have another person in our family.”
“When they understood what we would be saving her from,” Jennifer says, “the answer was a resounding yes.”
“Parkston told us that she fits into our family perfectly,” Conley adds. “There’s been no friction whatsoever. She’s an easy child.”
Margaret already knows what it’s like to have big brothers. She often plays Legos with Evanston, she says. “When he’s done with homework, we can play upstairs.”
Margaret nods enthusiastically when asked about the possibility of having a big sister.
“We make silly faces,” she says. “We ride bikes. She follows me on her bike, and I can pedal faster!” 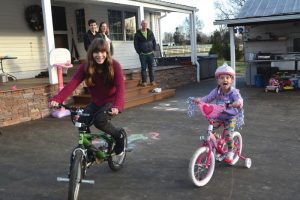 Margaret and Katya love riding bikes together on the back patio. Looking on are Evanston, Jennifer and Conley Myers. The Myers family is hoping to adopt Katya from Ukraine.

Jennifer says that Katya attends school in the Ukraine. It is a boarding school, but Katya stays there full-time.
The Myers have discovered that besides riding bikes, Katya likes Ping-Pong, and she likes to dance. She’s been taught Ukranian traditional dance, but she loves hip-hop, and Jennifer has taken her to Zumba classes at The Forum. Katya went with the Myers kids to a trampoline park over Christmas — a gift from Darcy Ward, Conley’s sister, and the family’s next-door neighbor.
“She liked it,” Conley reports, “and she likes the rock climbing at the Y. She’s fearless. That is the word I give to her.”
During her summer visit, Katya saw the beach for the first time. She’s taught her host family some Russian words — “Sto?” which means, “What’s up?” and “Pagnali,” which means, “Let’s go!”
During this recent visit, the family attended a party in Charlotte for other kids in the area who have been adopted from Ukraine. Jennifer’s parents have come from New York to meet Katya, along with Conley’s mom, Bonnie Myers, who lives in Cleveland.

“They’re definitely all on board,” Conley says of their extended family. “They are all very excited and supportive.”
Katya’s face lights up at the mention of the Russian word for grandmother, “Babushka.”
The family has made some traditional Russian dishes for Katya, including golubsti — cabbage rolls — along with borscht. And Katya has discovered pizza, hamburgers, and macaroni and cheese. Interestingly the word for pizza is, well, “pizza.”
Some things, it seems, are universal.

It’s 2019 and our annual gesture of self-improvement and moderation is always a test, especially for gardeners. Some fail quickly... read more