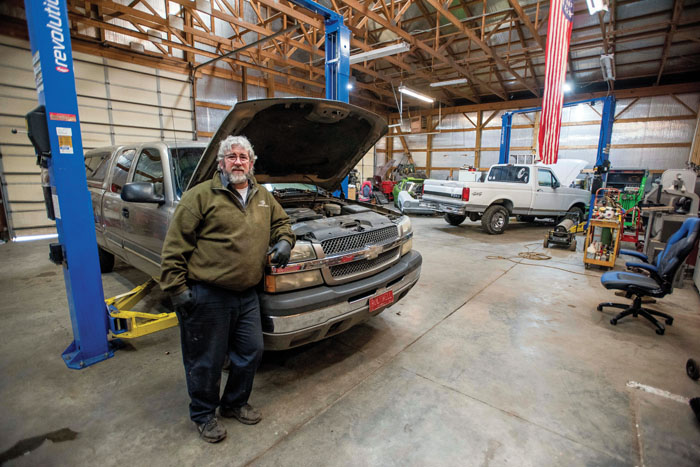 ROCKWELL — Jeff Yost started working on cars when he was a teenager.

Last summer, he opened Rowan Auto & Speed Shop in Rockwell, repairing anything from lawnmowers and bulldozers to any type of car.

“I’ll work on about anything,” Yost said. “They’re all mechanical. They’re all put together by a human. It’s just about having the information to work on them.”

“I want customers to know when they come in, it’s not a shade-tree guy working on their car,” Yost said. “I’m knowledgeable about what I do. I want the car fixed right the first time for them, and I stand behind everything I do.”

He also has owned several businesses over the years, including Handyman of Rowan, but he was itching to go back to repairing cars.

“I turned 50 years old this year,” Yost said. “I might want to say slow down just a little bit, but I wasn’t happy at what I was doing.”

Over the years, Yost said he wanted to work for himself more and more.

“I love being my own boss and I love to fix things, but working with public. I like to do things on my terms,” Yost said.

While working for others in the automotive business, Yost said he was uncomfortable selling customers parts and services they didn’t need.

“If you come in for an oil change or a brake job or whatever, I’m going to do the job,” Yost said. “Of course, I’m going to look the vehicle over and I’m going to put an estimate together. If it needs a transmission service or a water pump or what have you, I’m going to price that to you and make you aware of it, but it’s no pressure.”

He said he would like to work on commercial vehicles as well.

“I’m looking for some bigger commercial customers, bigger companies that have fleets of vehicles,” Yost said. “I want that service work. I want to be able to show them where I can save them some money versus wherever they’ve been taking it to.”

He said he has a community of mentors he has relied on for advice to open Rowan Auto & Speed Shop. They advised him to continue to face adversities and keep his name clean.

“You can work on 100 cars,” he said. “You can do 100 things right and 100 people will be happy with you. But if you have one person who is not happy for whatever reason, whether it’s right or wrong, and they go out and tell 10 people … they’ve burned you.”

He said one of the best compliments a customer can give is referring someone else to the shop.

Owning a business in Rockwell is in the family, he said. His grandfather owned Rockwell Tire and Fuel.

“I definitely feel an attachment to the area,” Yost said.

Yost’s interest in repairing cars goes further with racing hot rods. He had the repair shop fix up his Ford Maverick, fitting for his motto: “We do old school cool.”

Rowan Auto & Speed Shop is at 436 Broad St. in Rockwell. The auto repair shop is open from 8 a.m. to 5 p.m. Monday through Friday, and it takes drive-ins.