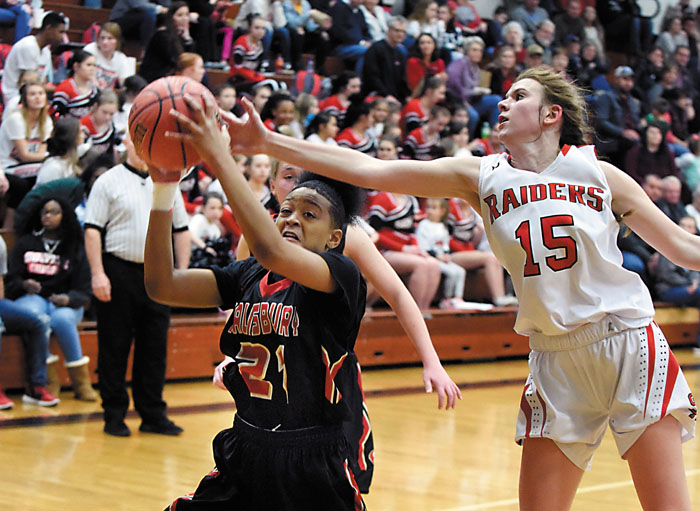 The league-leading Hornets gushed past South Rowan, 71-49, on Friday to post their second Central Carolina Conference victory of the week.

“They executed the game plan we gave them,” coach Lakai Brice said, after visiting SHS (12-2, 8-1) opened a one-game lead in the standings halfway through the conference schedule. “Picking up our defense and containing Janiya Downs. We didn’t let her get to the basket as much and tried to take her out of the game. I think we limited the touches she got — and that’s because Anayia (Fulson) defended her so well.”

Downs led the third-place Raiders (7-7, 6-2) with 21 points, but played a quiet game until igniting for 14 fourth-quarter points.

“It was just rough,” Downs said. “At first, they double-teamed me, then they started triple-teaming me. Every possession was like that. That’s why it seemed so quiet.”

Salisbury was again paced by Bryanna Troutman, the Wingate-bound senior who filled out the scoring sheet with 24 points, seven rebounds, six steals, four blocked shots and four assists. She finished the game with 1,002 career rebounds.

“I like rebounding,” the 6-foot forward said with a post-game smile. “I like to see if I can outjump people.”

South fell behind by 10 points in the first six minutes, but drew within 18-12 on baskets by Madison McGuire and Bethany Rymer, late in the first quarter. Salisbury extended its advantage in the second period, when Troutman scored 11 points and teammate Rachel McCullough drove for a layup, making it 33-15.

“I think we got into their heads and made them feel some pressure,” said McCullough, the freshman who flipped in 13 points, just three nights after scoring a season-high 24 against North Davidson. “We came in with intensity, knowing what we had to do — keep the ball inside and draw fouls. And when we needed a trap, we worked as a team and took care of it.”

It was teammate Jaleiah Gibson who gave the Hornets a more-than-double, 50-24 lead with an authoritative layup late in the third quarter. Then McCullough put on a shooting display, sticking three consecutive 3-pointers in an 83-second span and stretching the lead to 59-26.

“You have to move to shoot a three,” McCullough explained. “My teammates were working extra hard to make that extra pass and get me the ball. In the beginning of the season, I was in a freshman slump and wouldn’t even take those shots. Now, I’ve gotten into a rhythm.”

It’s a rhythm that gave South the blues.

“I still don’t know what happened,” South coach Stacy Ellis said, after the Raiders dropped their second straight conference decision. “Maybe it was their game plan. They came out and challenged all of our other kids besides (Downs) to do something. When’s she’s being double-teamed, someone else has to get open and make a play.”

Downs, a Catawba signee, added seven rebounds and three blocks. She capped her evening with a too-late-to-matter 3-pointer in the final minute.

“I’d seen everything their defense threw at me,” Downs said. “Now, going into the second half of the season, we’ll all need to step up and take over.”