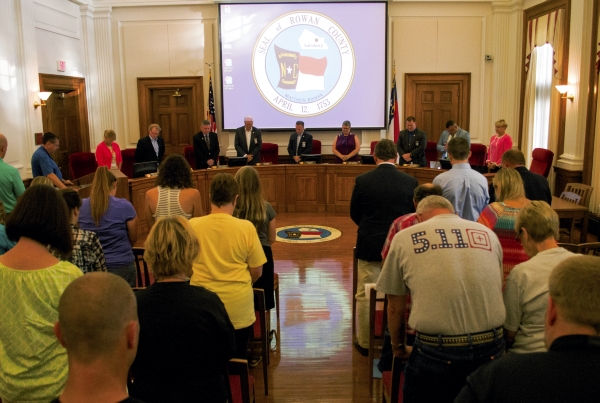 It is no trifle for the Rowan County commission to sacrifice a quarter-million dollars of taxpayers’ money to settle the prayer lawsuit.

Yet, paying the plaintiff’s legal fees is likely just the tip of the iceberg. It is one more link in a chain of hidden expenses and lost opportunities that accompanied the lawsuit.

How did the lawsuit affect Rowan’s economic development over the past six years? The lawsuit catapulted Rowan County into the national news on several occasions. All the while, the board was working to attract new businesses and jobs into the county. Publicity from the lawsuit undoubtedly undercut their efforts.

Businesses seek to negotiate incentives as part of relocating. Instead of responding to a written request for changes in their meeting protocols, the board decided on litigation. Does this seem like a group that will negotiate in good faith? Businesses looking to relocate have concerns for their employees’ quality of life. Does Rowan County seem like an inclusive and welcoming community?

What other commission duties were eclipsed by attention to the lawsuit? Closed session meetings were needed in order to confer with legal representation. The strict rules regulating closed meetings ensure that only legal consultation could take place in each such meeting — no other matters allowed. Besides distracting the commissioners from their administrative duties, expenses were incurred. During the discovery phase of the suit, documentation and recordings had to be copied and submitted to the court and to the ACLU.

How were election outcomes affected by the emotional energy the lawsuit stirred up? To what extent were elections swayed by votes for or against the lawsuit? Over several election cycles, candidates for the board were obliged to present a position on continuing the lawsuit or not. Absent this hot-button topic, would campaigns have been more focused on the betterment of Rowan County?

What does it say about the commissioners’ objectivity and decision-making that they were influenced by special-interest groups such as Alliance Defending Freedom and the National Center for Life and Liberty? They weren’t looking after Rowan County’s best interests.

Did the commissioners seek contrasting opinions from moderate sources? This does not inspire confidence in other decisions made during the previous six years.

In the aftermath of the court ruling, the commissioners’ public statements have been defiant. In an ironic twist, it is claimed they intended to “(stand) up for” government officials of any faith in exercising their first amendment rights.  Recently, the ACLU was described as “bullies” who “make a living in going after other small communities in federal courts… and they have almost unlimited funding.” This is from Commissioners Chairman Greg Edds, who claimed a right to impose his own sectarian views from the “pulpit” of his elected office.

We’ve been told the circuit court decision will be reversed by the Supreme Court soon. This is from County Attorney Jay Dees, who earlier observed that legal precedent was on the county’s side.

Here is the conclusion: The lower court’s verdict stands.

The Rowan County Board of Commissioners, while claiming to champion First Amendment rights, violated the rights of the people they were elected to serve. The board’s actions were found to be unconstitutional.

Why is there no room for reflection on what might have been done better regarding mutual respect, the importance of inclusion, the diversity of the public and separation of church and state. Were no lessons learned from all of this? I would like to hear just one note of apology expressed before this is over.

Now, the bill is turned over to taxpayers. Do we get a vote?

Jeffrey Sharp is a software and electronics design engineer who lives in Salisbury.