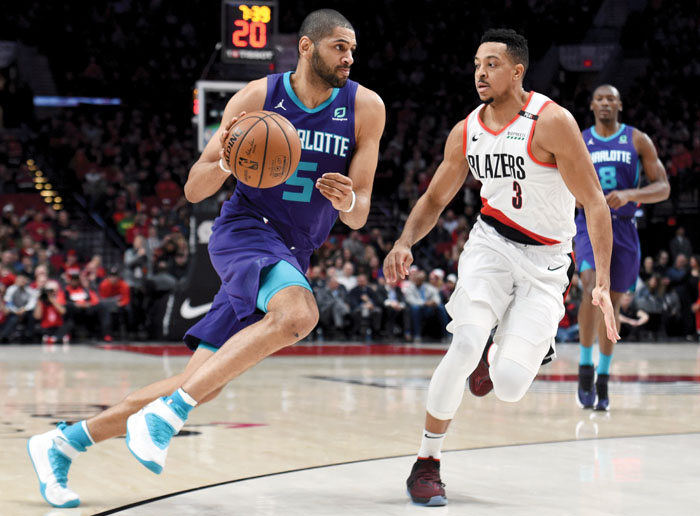 By ANNE M. PETERSON, AP Sports Writer
PORTLAND, Ore. (AP) — CJ McCollum had 30 points and Damian Lillard scored 20 before resting in the fourth quarter, and the Portland Trail Blazers routed the Charlotte Hornets 127-96 on Friday night.
Portland has won four straight and six of seven overall. It improved to 17-7 at home, tied for best in the Western Conference.
The victory also extended the Blazers’ winning streak over the Hornets in Portland to 11 straight games. Charlotte hasn’t won in Portland since 2008.
Kemba Walker had 18 points for the Hornets, who fell to 5-14 on the road this season in the fourth of a five-game trip.
Portland center Jusuf Nurkic had 11 points, 11 rebounds and tied career highs with eight assists and six blocks before he also went to the bench early in the fourth. On a tear lately, the Bosnian big man averaged 21.4 points and 11.4 rebounds over the previous eight games.
“The big fella’s been awesome,” McCollum said.
Portland also got another solid performance from its reserves. Seth Curry’s 3-pointer extended Portland’s lead to 50-36. Jake Layman’s alley-oop dunk from Lillard put the Blazers up 61-42.
Portland’s backups have accounted for at least 50 points in six games this season, all Blazers wins. They had 48 points against the Hornets, but got extra work because the starters were rested.
The Blazers led 70-49 at the break and extended the lead to as many as 35 points in the third quarter.
McCollum finished with five 3-pointers and Portland shot 55.9 percent for the game. The Blazers also had a season-high 16 blocks.
The Blazers were without forward Maurice Harkless for the second straight game because of left knee soreness. There’s no word on how long he’ll be out.
TIP-INS
Hornets: Forward Nicolas Batum played in Portland for seven seasons. … Portland’s 70 points at the half were the most for a Hornets’ opponent this season.
Trail Blazers: Lillard had a career-high four blocks. … McCollum got into the campaign to get Lillard to the All-Star game with a video where he re-creates the final dance scene from the movie “Napoleon Dynamite.” The video, released on social media on Thursday, was shown on the scoreboard during the first quarter.
UP NEXT
Hornets: Visit Sacramento on Saturday night.
Trail Blazers: Open a two-game trip on Sunday against the Denver Nuggets.
___
More AP NBA: https://apnews.com/NBA and https://twitter.com/AP_Sports